40 years ago, George Clinton predicted the future on 'Computer Games' and 'Atomic Dog': ‘If it was a robot, then give 'em a booty and program 'em to be funky' 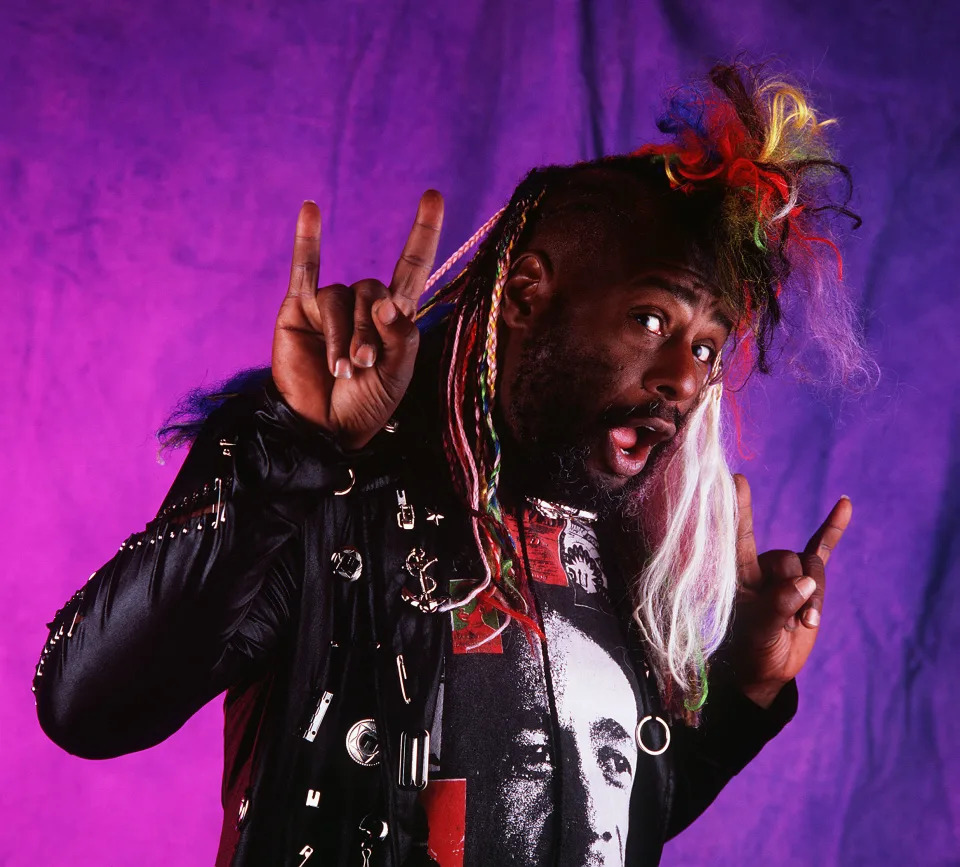 When Parliament-Funkadelic legend George Clinton competed on The Masked Singer this week, his Gopher disguise was undoubtedly far from the wildest outfit he’d ever donned onstage. Everyone seemed shocked by Clinton’s reveal — even his Paisley Park colleague Sheila E., who sat in with the house band that night — because, of course, dressing up as an Atomic Dog would have been too obvious.

Clinton’s Masked Singer appearance in fact coincided with this week’s 40th anniversary of his groundbreaking debut solo album, Computer Games, and its seminal single, “Atomic Dog,” which introduced him to a whole new (and new wave) audience. While many of Clinton’s peers rejected early-‘80s technology, the always forward-thinking Clinton embraced the digital age back in 1982, as rap and electro rose in popularity.

“The computer was just on my mind. … I could hear it coming from Kraftwerk, and I could tell that stuff was getting ready to be new. … They hadn't even named it yet, but it was a new wave,” Clinton tells Yahoo Entertainment. “The first thing [old-school musicians] worried about is that computers was gonna take our place when it came to instruments — which they did, to a certain extent. A lot of people worried about the Mellotron! But I figured I’d just make it funky. If it was a robot, then give ‘em a booty and program 'em to be funky.”

For Clinton, Computer Games was a long time coming. “I’m always of a futuristic mind, and I'm a big Star Trek freak, so I was actually waiting for the period when computers became what they are today,” he says, also noting that in the ‘80s, he became a major computer games freak who “played Galaxian, Gallaga, and Pac-Man, 24/7. … I mean, I started that [obsession] in ‘68, when I went to go see Fantasia and 2001: A Space Odyssey and I was tripping my butt off. So, I made a plan to pay attention when that [depiction of the future] showed up, when you could talk to somebody [on Zoom] like we’re doing right now. I waited for computers to become a reality. And by the time I got to ’82, it was time to do Computer Games.”

Still, Computer Games may have been a bit ahead of its time, because MTV initially didn’t play the space-invading, arcade-themed “Atomic Dog” music video. “They weren't actually playing a lot of Black artists at that time. Michael Jackson was one of the first,” Clinton recalls. “I do remember the record company asking me, along with Todd Rundgren, a dude from the Monkees, and somebody else, maybe David Bowie, to get all of us to do some videos when MTV first came out. They tried to get us to do videos together. But it all happened so fast [with MTV]. We didn't think people would catch on that fast.”

No one at Capitol Records, Clinton’s new label at the time, thought “Atomic Dog” — the second Computer Games single, following the equally game-changing top 20 R&B hit “Loopzilla” — would catch on so fast, either. Despite the lack of MTV support, the future-shocking track eventually went all the way to No. 1 on Billboard’s R&B chart — ironically displacing Michael Jackson’s “Billie Jean,” the song that broke the color barrier at MTV. “Atomic Dog” then occupied that top spot for four weeks. “It got big before the record company even realized they had such a big record,” says Clinton.

Clinton was as surprised as anyone, since nothing about “Atomic Dog” was planned out. In fact, when he recorded the track’s vocals at Detroit’s United Sound Studios, the backing music was played in reverse due to an engineer's error — and he didn't even notice at first, because he was “enhanced, or de-hanced, or however you wanna call it,” he chuckles. Clinton remembers entering the recording booth with little more than the word “dog” running through his addled brain.

“Back in those days, it was a tape recorder; you could actually flip the tape over and play it backwards, and it had a nice little swag to it with the echo coming in first,” Clinton explains. “It was one of my days when I was tripping out, and I just went in there and sang against the backward stuff. … The whole thing was ad-libbed. I was trying to figure out what to sing about when the song came on in my ears; when I realized that it was backwards, I had to kill time to think of what to sing about. So, I'm sitting up there trying to think of what key is it in, what am I gonna say, and that's why I'm talking: ‘This is the story of famous dog/For the dog that chases its tail will be dizzy/These are clapping dogs, rhythmic dogs/Harmonic dogs, house dogs, street dogs.’ Then I realized, this was the track. I did one take for the basic song, then I came back and just put parts in there to harmonize and make it make sense. I did maybe one or two takes.”

Add in the earworm-y chant of “bow-wow-wow, yippy-oh, yippy-ay,” and Clinton had a future classic on his hands (or paws). The result, which still sounds like the future four decades later, influenced countless Detroit techno artists and — along with, of course, P-Funk’s entire catalog — it laid down “the DNA for hip-hop” and G-funk. According to Clinton, Parliament-Funkadelic is in general is the most sampled artist of all time, recently surpassing James Brown, and he says, “As a matter of fact, pretty much every hip-hop artist has a song with a sample of ‘Atomic Dog’ in it.” Some of those more than 300 songs include Digital Underground’s “Doowutchyalike,” Dr. Dre’s “F*** Wit Dre Day (And Everybody’s Celebratin’),” Public Enemy’s “Brothers Gonna Work It Out,” MC Hammer’s “Pumps and a Bump,” Nas’s “American Way,” and a whopping seven tracks by Ice Cube. But the most prominent use of “Atomic Dog” is no doubt the interpolation in Snoop Dogg’s career-catapulting single “Who Am I (What's My Name)?,” which Clinton says he recently re-recorded with Snoop and Dr. Dre.

While Clinton says he was “compensated very well” the first time his catalog was sampled, by De La Soul, he’s “just now getting ready to be paid for most of that stuff. We’ve been in court for 35 years trying to get that, and we haven't gotten most of it at all — none of it, really, from back in those days.” He says he hasn’t even been fairly compensated for “Who Am I (What's My Name)?,” but he doesn’t blame his friend Snoop. “That was not on his part; it's the record companies,” he stresses. “All the artists was cool with it. … It didn't make sense to fall out with the artists, ‘cause that's just how it's done. Fighting against the [artists] becomes the verbiage that you hear on TV and becomes the main talking point, when that's not the case. It's actually the lawyers and the record companies. … But now myself and [civil rights attorney] Ben Crump, who’s my frat brother, we’re putting all that together now. It's all coming together, and there’s gonna be a hell of a [legal decision] announcement we’re gonna make in the next few weeks.”

In the meantime, Clinton has a new trick for the old “Atomic Dog.” He’s getting ready to release a remake in association with Black college fraternity Omega Psi Phi, aka the Que Dogs, who use “Atomic Dog” as their steps song; a music video featuring Crump and other fraternity brothers, shot at Howard University and Florida A&M University, is also coming soon. And The Masked Singer won’t be fans' only chance to see Clinton, or his likeness, onscreen. While it remains to be seen who will play Clinton in the upcoming Snoop Dogg biopic, he’ll be portrayed by Wiz Khalifa (who sported a very P-Funky costume as the Chameleon on The Masked Singer Season 5) in the Casablanca Records movie Spinning Gold, and Eddie Murphy is in talks to take on the lead role in a George Clinton biopic.

And Clinton approves both castings. “I like Wiz; I go to his cannabis situation in Vegas,” he laughs. “And oh, Eddie’s good. He played Dolemite! And if you play Dolemite, you can play anybody.”

George Clinton on his memories of Prince: ‘He didn’t do no drugs’