A Chinese Telescope Did Not Find an Alien Signal. The Search Continues. - The New York Times

China’s astronomers have been initiated into the search for extraterrestrial intelligence with the kind of false alarm that others in the field have experienced for decades. 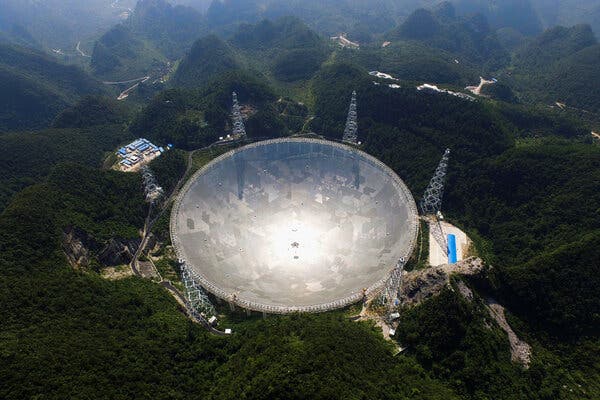 An aerial view of the FAST telescope in China’s Guizhou province. Astronomers there recently detected a signal that was mistaken for extraterrestrial intelligence.Credit...National Astronomical Observatories of the Chinese Academy of Sciences

It was a project that launched a thousand interstellar dreams.

Fifty years ago, NASA published a fat, 253-page book titled, “Project Cyclops.” It summarized the results of a NASA workshop on how to detect alien civilizations. What was needed, the assembled group of astronomers, engineers and biologists concluded, was Cyclops, a vast array of radio telescopes with as many as a thousand 100-meter-diameter antennas. At the time, the project would have cost $10 billion. It could, the astronomers said, detect alien signals from as far away as 1,000 light-years.

The report kicked off with a quotation from the astronomer Frank Drake, now an emeritus professor at the University of California, Santa Cruz:

At this very minute, with almost absolute certainty, radio waves sent forth by other intelligent civilizations are falling on the earth. A telescope can be built that, pointed in the right place and tuned to the right frequency, could discover these waves. Someday, from somewhere out among the stars, will come the answers to many of the oldest, most important and most exciting questions mankind has asked.

The Cyclops report, long out of print but available online, would become a bible for a generation of astronomers drawn to the dream that science could answer existential questions.

“For the very first time, we had technology where we could do an experiment instead of asking priests and philosophers,” Jill Tarter, who read the report when she was a graduate student and who has devoted her life to the search for extraterrestrial intelligence, said in an interview a decade ago.

“Project Cyclops” summarized the results of a NASA workshop on how to detect alien civilizations.Credit...NASA

I was reminded of Cyclops and the work it inspired this week when word flashed around the world that Chinese astronomers had detected a radio signal that had the characteristics of being from an extraterrestrial civilization — namely, it had a very narrow bandwidth at a frequency of 140.604 MHz, a precision nature doesn’t usually achieve on its own.

They made the detection using a giant new telescope called the Five-hundred-meter Aperture Spherical radio Telescope, or FAST. The telescope was pointed in the direction of an exoplanet named Kepler 438 b, a rocky planet about 1.5 times the size of Earth that orbits in the so-called habitable zone of Kepler 438, a red dwarf star hundreds of light years from here, in the constellation Lyra. It has an estimated surface temperature of 37 degrees Fahrenheit, making it a candidate to harbor life.

Just as quickly, however, an article in the state-run newspaper “Science and Technology Daily” reporting the discovery vanished. And Chinese astronomers were pouring cold water on the result.

Zhang Tong-jie, the chief scientist of China ET Civilization Research Group, was quoted by Andrew Jones, a journalist who tracks Chinese space and astronomy developments, as saying, “The possibility that the suspicious signal is some kind of radio interference is also very high, and it needs to be further confirmed or ruled out. This may be a long process.”

Dan Werthimer, of the University of California, Berkeley, who is among the authors of a scientific paper on the signal, was more blunt.

Frank Drake with his eponymous equation, which predicts the number of observable civilizations in our galaxy.Credit...Dr. Seth Shostak/Science Source

“These signals are from radio interference; they are due to radio pollution from earthlings, not from E.T.,” he wrote in an email.

This has become a familiar story. For half a century, SETI, or the search for extraterrestrial intelligence, has been a game of whack-a-mole, finding promising signals before tracking them down to orbiting satellites, microwave ovens and other earthly sources. Dr. Drake himself pointed a radio telescope at a pair of stars in 1960 and soon thought he had struck gold, only to find out the signal was a stray radar.

More recently, a signal that appeared to be coming from the direction of the sun’s closest stellar neighbor, Proxima Centauri, was tracked down to radio interference in Australia.

Just as NASA’s announcement last week that it would make a modest investment in the scientific study of unidentified flying objects was intended to bring rigor and practicality to what many criticized as wishful thinking, so, too, was the agency’s Cyclops workshop held at Stanford over three months in 1971. The conference was organized by John Billingham, an astrobiologist, and Bernard Oliver, who was the head of research for Hewlett-Packard. The men also edited the conference’s report.

In the introduction, Dr. Oliver wrote that if anything came of Cyclops he would consider this the most important year of his life.

“Cyclops was, indeed, a milestone, largely in pulling together a coherent SETI strategy, and the clear calculations and engineering design that followed,” said Paul Horowitz, an emeritus professor of physics at Harvard who went on to design and start his own listening campaign called Project Meta, funded by the Planetary Society. The movie director Steven Spielberg (“E.T.” and “Close Encounters of the Third Kind”) attended the official opening in 1985 at the Harvard-Smithsonian Agassiz Station in Harvard, Mass.

But what Dr. Oliver initially received was only a “Golden Fleece” award from Senator William Proxmire, Democrat of Wisconsin, who crusaded against what he considered government waste.

“In my view, this project should be postponed for a few million light years,” he said.

On Columbus Day in 1992, NASA did initiate a limited search; a year later, Congress canceled it at the behest of Senator Richard Bryan, Democrat of Nevada. Denied federal support ever since, the SETI endeavor has limped along, supported by donations to a nonprofit organization, the SETI Institute, in Mountain View, Calif. Recently, through a $100 million grant, the Russian entrepreneur Yuri Milner set up a new effort called Breakthrough Listen. Dr. Horowitz and others have expanded the search to what they call “Optical SETI,” monitoring the sky for laser flashes from distant civilizations.

Cyclops was never built, which is just as well, Dr. Horowitz said, “because, by today’s standards, it would have been an expensive hulking monster.” Technological developments like radio receivers that can listen to billions of radio frequencies at once have changed the game.

A staff member conducts maintenance of the reflector panels of the FAST telescope, which was built in 2016 with SETI in mind.Credit...Xinhua News Agency / Contributor

China’s big new FAST telescope, also nicknamed “Sky Eye,” was built in 2016 partly with SETI in mind. Its antenna occupies a sinkhole in Guizhou in Southwest China. The size of the antenna eclipses what was the iconic Arecibo radio telescope in Puerto Rico, which collapsed ignominiously in December 2020.

Now FAST and its observers have experienced their own trial by false alarm. There will be many more, SETI astronomers say.

The generation of astronomers who were inspired by the Cyclops report is getting old. Dr. Billingham died in 2013. Dr. Oliver died in 1995. Dr. Tarter retired from the SETI Institute in 2012, proud that she had never sounded a false alarm.

Those who endure profess not to be discouraged by the Great Silence, as it is called, from out there. They’ve always been in the search for the long run, they say.

“The Great Silence is hardly unexpected,” said Dr. Horowitz, including because only a fraction of a percent of the 200 million stars in the Milky Way have been surveyed. Nobody ever said that detecting that rain of alien radio signals would be easy.

“It might not happen in my lifetime, but it will happen,” Dr. Werthimer said.

“All of the signals detected by SETI researchers so far are made by our own civilization, not another civilization,” Dr. Werthimer grumbled in a series of emails and telephone conversations. Earthlings, he said, might have to build a telescope on the backside of the moon to escape the growing radio pollution on Earth and the interference from constellations of satellites in orbit.

The present time, he said, might be a unique window in which to pursue SETI from Earth.