“Thank you very much for coming” prize chair Anders Olsson says with a smile, and the ceremony is over!

Who is Abdulrazak Gurnah?

The Tanzanian novelist was born in Zanzibar in 1948, and has since lived in the UK and Nigeria

He writes in English, and his most famous novel is Paradise, which was shortlisted for the Booker prize in 1994

The Nobel prize in literature has been awarded to the novelist Abdulrazak Gurnah “for his uncompromising and compassionate penetration of the effects of colonialism and the fate of the refugee in the gulf between cultures and continents”.

Gurnah, who grew up on the island of Zanzibar but arrived in England as a refugee in the 1960s, has published ten novels as well as a number of short stories. The Nobel committee said that “the theme of the refugee’s disruption runs throughout his work”.

And the winner is novelist Abdulrazak Gurnah from Zanzibar

BREAKING NEWS:
The 2021 #NobelPrize in Literature is awarded to the novelist Abdulrazak Gurnah “for his uncompromising and compassionate penetration of the effects of colonialism and the fate of the refugee in the gulf between cultures and continents.” pic.twitter.com/zw2LBQSJ4j

Margaret Atwood, Ngugi wa Thiong’o and Haruki Murakami are getting a lot of love in the live stream comments

The livestream has started

And we’re off! You can watch the video at the top of this liveblog (you may need to refresh your browser if you joined us a while back). Ten minutes until the winner is announced... 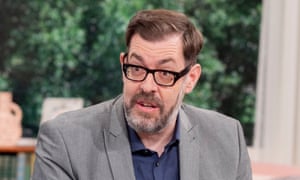 A closer study of the odds reveals that Richard Osman, fresh from topping the book charts in the UK with his latest slice of cosy crime, is at 43/1 to win this year’s Nobel prize for literature, while Stephen King and JK Rowling are both at 41/1. Patti Smith and Joni Mitchell, possibly riding on Bob Dylan’s laureate coattails, are at 35/1. Personally, I’d love to see what happened if it went to the mysterious Elena Ferrante, who’s at 25/1.

Naturally, we can’t do a Nobel prize live blog without sharing this video of 2007 winner Doris Lessing. It never fails to make us laugh.

Let’s also take a moment to note Olsson’s response to Shephard’s questions about Peter Handke’s controversial win. The choice was widely criticised over Handke’s support of Slobodan Milošević’s genocidal Serbian regime; Olsson found the criticism “a bit shocking because it did not concern his literary merit as a writer”, but reminds “proud” of a choice which he is “sure … will be viewed as one of our best choices in the history of the prize”. I’m not sure about that, but I’m amused by his description of Handke as a “political idiot”.

Here’s the context: “What was for us particularly bewildering was that we did not get any criticism for the prize to Pinter, for instance. Harold Pinter was a person who was much more articulate and radical in a political sense than Handke ever was. Handke is a political idiot, you could say. His stance on politics is not all that radical or as conscious as Pinter’s was.” 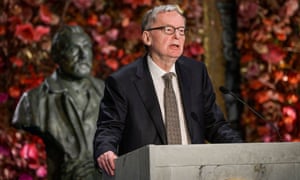 Shephard also has an interview with Nobel prize committee chair Anders Olsson, who tells him that “we feel that we do not have any crisis anymore” and that “we have found stability in our work in the academy”. This follows the cancellation of 2018’s prize after allegations of sexual misconduct, financial malpractice and repeated leaks. The sexual assault accusations were made against Jean-Claude Arnault, husband of academy member Katarina Frostenson; Arnault was subsequently convicted of rape, and Frostenson departed the 18-strong Swedish academy, along with a handful of other members.

Are there any clues to be gleaned from Olsson’s answers? I’m intrigued by his comment that “it’s very important for us right now to expand and widen our horizons”, and that while “literary merit” is the “absolute and the only criterion for us within the academy”, he feels that “what we can do is to widen our orientation of literature”.

Asked about the prize’s reputation for Eurocentrism and lack of female winners – just 16 women have won the Nobel, out of 117 winners – Olsson admitted it had been “very Eurocentric in the first part of the 20th century, and very few women won”. But he pointed to “a considerable shift” in recent years, and revealed that from January, international experts “will be giving us reports from areas of language [where] we do not have deep competence within the academy – Asian and African, languages that we do not command but wish to”.

“That will be a very interesting change, and it will expand our knowledge and our orientation in world literature,” he said. It seems to me that this is something the academy should have already been doing – but let’s see what changes it brings.