Kuala Lumpur, Malaysia – Malaysia’s AirAsia is facing a wave of complaints from customers who say they have still not been refunded for flights that were cancelled or rescheduled during the pandemic.

AirAsia and its subsidiary AirAsia X (AAX), both owned by Capital A Berhad, grounded thousands of flights in 2020 and 2021 after the Malaysian government shut state and international borders to curb the spread of COVID-19.

But months after the low-cost carrier resumed flights following the lifting of interstate and international border restrictions for Malaysians in October, hundreds of customers have taken to social media to complain of poor customer service and long waits for refunds.

Rohana Betak, 60, said she requested a refund of 4,000 Malaysian ringgit ($911) after the airline cancelled her flights between Senai and Kota Kinabalu, the capital of Sabah state, following the introduction of a nationwide lockdown in March 2020.

Betak, who planned to visit the area around Mount Kinabalu, Southeast Asia’s highest peak, with her family in October 2021, said the airline’s automated online customer service only offered her the option of travelling on different dates. Betak decided against accepting the offer due to uncertainty over when restrictions would be lifted and concerns about catching COVID-19. Two years later, she says she is still waiting for her money back.

“In my request, I said it was fine to refund me credits for the booking but instead I was reminded in June 2020 that I must board the flight to Sabah on a different date and there would be no refunds,” Betak told Al Jazeera.

“It was not helpful because instead of offering me at least credit in refunds, it told me I had no other choice but to travel on different dates.” 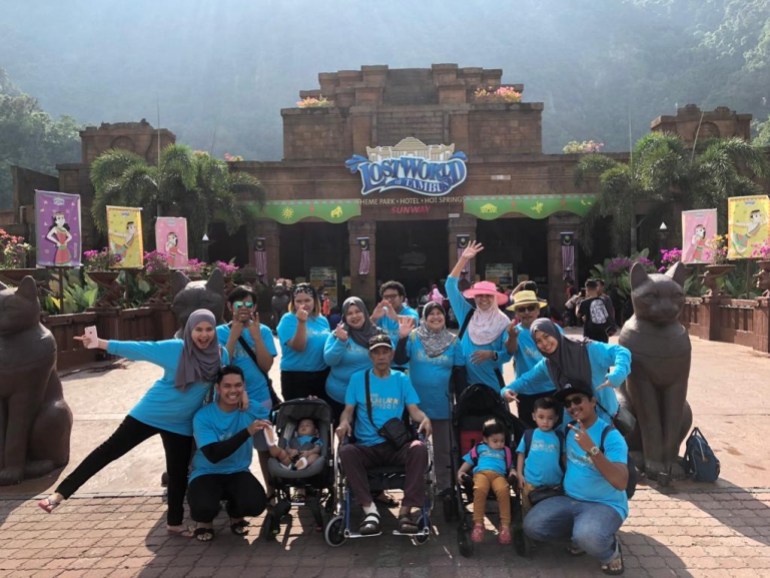 Rohana Betak, pictured in a pink hat in the back row, says she has been waiting two years for a refund from  AirAsia [Courtesy of Rohana Betak]

Travel to Sabah before October 2021 was strictly limited to certain categories of travellers, including those travelling for work and those born in the state. Rohana and her family did not fall under any exempted category.

“When it demanded I get on another flight, I asked if they wanted to send me and my family to our deaths?” Betak said. “It’s so frustrating and I am so tired of trying to get my money back so I’ve accepted that I might not get my money back at all.”

Many of the complaints have been directed towards AVA, AirAsia’s online chatbot, which is the only line of communication between customers and the airline for issues involving bookings or flights.

In particular, some have questioned why it is so difficult to reach customer service to request a refund, even for flights booked since the lifting of pandemic restrictions.

Customer Aulia Chaerisa Salleh said she is waiting for a refund for a flight between Batam and Jakarta that was booked earlier this month after she was informed no seat was available.

“I paid for my ticket and it did not register in the system so I tried to get my refund for my tickets. I tried the AVA live chat but it is not helpful at all. It has been days, I haven’t heard from them,” she said.

Under AirAsia’s current refund policy, the airline offers customers a refund, credit or a new travel date whenever a flight is cancelled or postponed.

AirAsia told Al Jazeera the airline is engaged in ongoing dialogue with consumer regulators across the region to ensure compliance with all local regulations.

“AirAsia Group’s policies are in line with many low-cost operators in the travel industry worldwide and are fully compliant with all regulatory requirements and as a customer-centric airline, we have focused on resolving all customer queries during the pandemic as soon as possible,” a spokesperson said.

The airline group said it has resolved more than 90 percent of refund requests and is committed to resolving a small number of outstanding claims as soon as possible.

“In Malaysia for example, our current refund progress is only left with 0.03 percent of the refund requests we received and we are looking forward to completing the refunds exercise for all outstanding queries within the next few months,” the spokesperson said, adding that the past two years had been the most challenging in the history of commercial aviation.

The spokesperson added that “our passengers remain our number one priority” and the airline will “continue to enhance our services to deliver the very best in terms of safe, affordable and reliable air travel”.

Tan Kok Liang, president of the Malaysian Association of Tour and Travel Agents (MATTA), said the refunds backlog is a short-term issue and its 3,100 members will continue to book with AirAsia as long as requested by customers.

“The problem child is AAX and while air connectivity is crucial for tourism recovery, based on media reports, AirAsia should be held more accountable to all stakeholders,” Tan told Al Jazeera.

Following the release of Capital A’s Annual Report 2021 last month, some social media users vented their frustrations on Fernandez’s personal Instagram accounts, with one comment slamming AirAsia as “the one and only airline that does not have a customer service phone number.”

Despite the generous executive compensation, AAX, the group’s long-haul carrier, was last year forced to undergo debt restructuring to save itself from liquidation after racking up huge debts during the pandemic.

In March, AAX announced it had completed its debt restructuring after creditors earlier agreed to a deal under which the airline would pay just 0.5 percent of outstanding debt and terminate existing contracts to restructureRM33.65 billion(US$8.1 billion) of liabilities.

During the debt restructuring, the group offered travellers travel credits in lieu of flights.