‘All is lost’: Floods in India’s Assam leave trail of destruction

Nellie and Raha, Assam – Sakina Khatoon is among 300 people marooned in a reserve forest for more than a week since the deadly floods ravaged at least 12 villages in Nellie in Morigaon district of India’s northeastern state of Assam.

With their homes and fields submerged in Dahuti Habi village, 70km (43 miles) away from Assam’s main city of Guwahati, the families have no option but to inadvertently risk conflict with wildlife in an elephant corridor in Nellie’s Khulahat Forest.

“Yesterday, three of them came very close to the camp,” Khatoon told Al Jazeera. “Everyone started shouting and drove them away. But we didn’t sleep last night.”

Khatoon said people were living in perpetual fear of the water level rising and the tuskers that continually stray towards them in the forest. 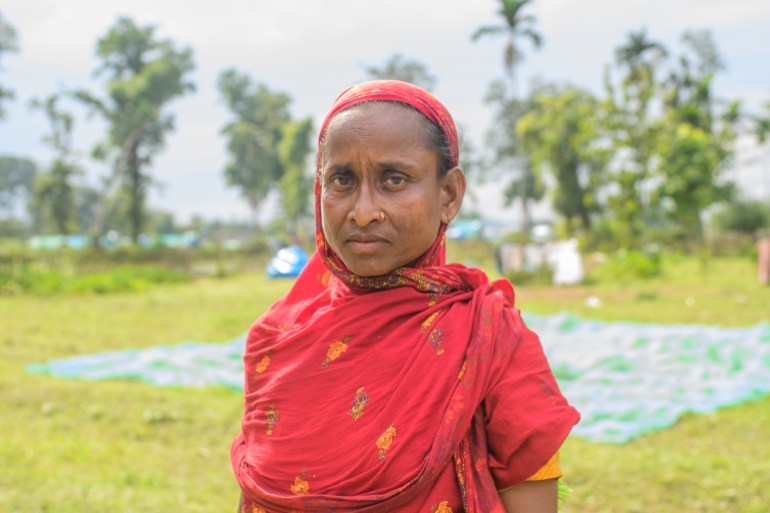 Millions in Assam have been affected by the floods since heavy pre-monsoon rains first hit the region last month, inundating large parts of the valley. After the initial deluge in May, no one expected the floods to worsen with the arrival of monsoon showers, leading to the breach of 297 embankments in 20 districts by June 19.

Displaced residents recalled seeing this ferocity of the Kopili River, a tributary of the mighty Brahmaputra, in 2004 and 2007. This year, everyone agreed, is the worst.

As of Sunday, 2,524 villages in Assam were affected across 27 districts, with more than 200,000 displaced people taking shelter in 564 relief camps across the state, according to Assam’s Disaster Management Authority. At last count, the death toll had reached 127. 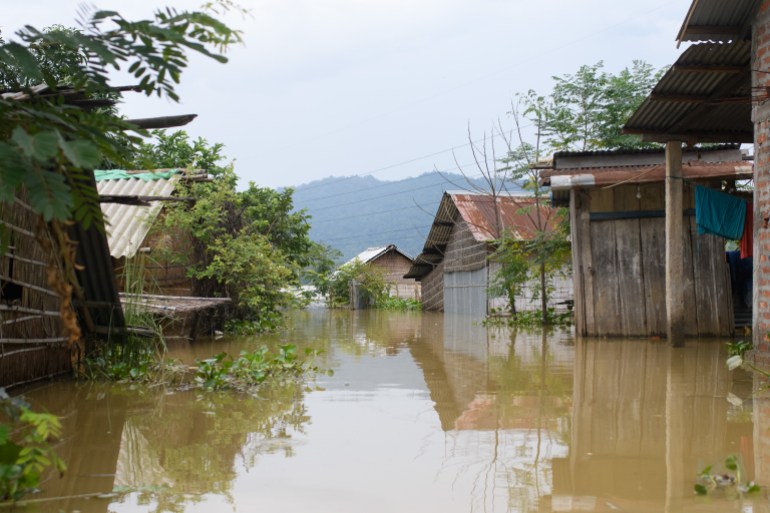 Heavy rainfall aside, the release of water from nearby hydroelectric projects on the Kopili River in Dima Hasao and Karbi Anglong overwhelmed the embankments in districts such as Morigaon and the adjoining Nagaon.

S Brahma, circle officer in Raha, a small town in Nagaon, told Al Jazeera they had been warned before the opening of the four sluice gates in Dima Hasao.

“But even the weather forecast is uncertain these days,” she said. “The weather has been very unpredictable this time.”

As soon as the water gushed into her village on June 17, Khatoon, along with her husband, son and two daughters, started preparing to move to higher ground. The family loaded their granary reserves onto wooden boats along with necessary cooking utensils and paddled themselves to safety inside the forest.

“We have managed to save only some of the two quintals of paddy from our reserves that went under water,” said Khatoon. “Everything else – our house, cattle and all other belongings – was lost.”

With little provisions available, many in the camp are getting by on one square meal a day.

“People are surviving by picking up some labour work but that is also hard to find because of the floods,” Khatoon said.

The floods have also caused a huge crisis of drinking water, with people in partially inundated houses and relief camps struggling to find it. In Khulahat Forest camp, residents have taken to digging 2-3 feet deep to find water for drinking and cooking. 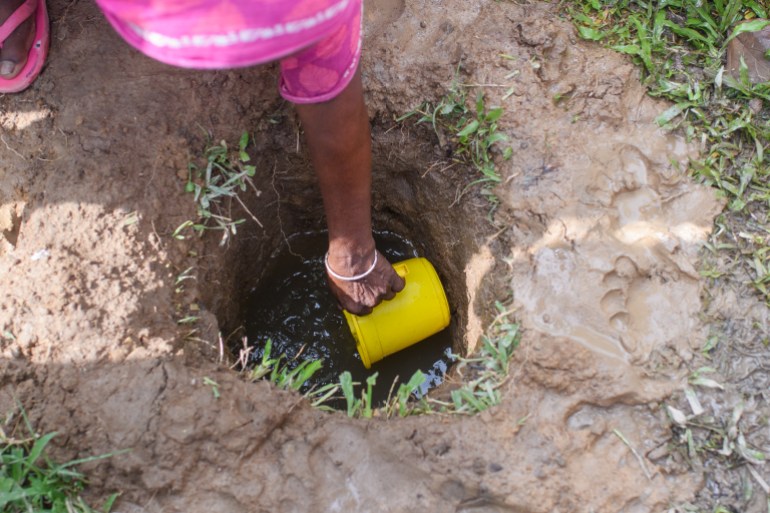 Roimon Nessa gets water for daily use from a hole dug in the ground, in Nellie [Prakash Bhuyan/Al Jazeera]

Khatoon, who works as an accredited social health activist (ASHA) in Dahuti Habi village, said the drinking water crisis has led to a host of water-borne diseases.

“Many people in the camp have contracted diarrhoea, fever and dysentery as well as blisters on their feet,” she said, exhibiting the fungal growth around one of the inmates’ feet. 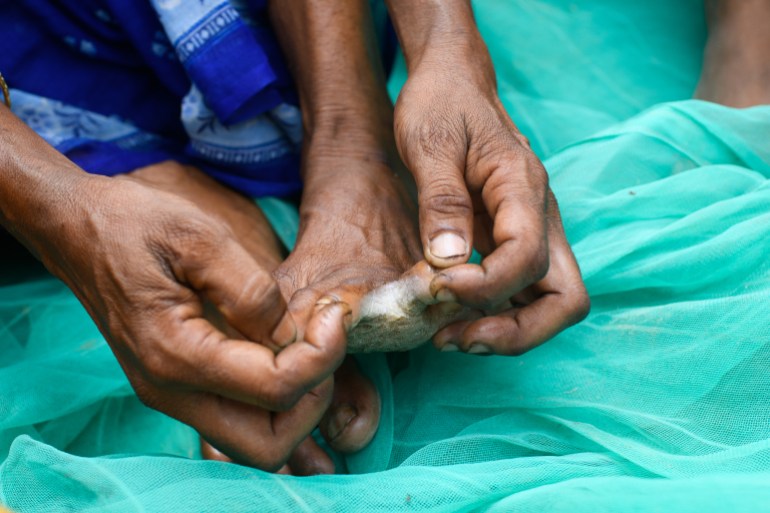 Dr Syed Faizan Ahmed, a resident in Silchar Medical College, told Al Jazeera a “big” epidemic of water-borne diseases such as typhoid is expected to follow soon after the floods.

“The floodwater contains lot of faecal bacteria and viruses, so oral faecal diseases like diarrhoea and typhoid apart from skin allergies and infectious diseases will be common,” he said, adding that his hospital had already started preparing to treat immuno-compromised people in the paediatric and geriatric age groups.

Ashraful Islam, a former school teacher camping at a vegetable market turned into a relief camp in Nellie, said they were easily looking at another month before they could go home.

“The government should have made arrangements for drinking water. The only time we received any aid was from some Congress politicians who distributed a half-litre bottle to each family along with some snacks,” he said, referring to the main opposition party in the state.

‘No farming this year’

Nearly 32km (20 miles) away in the adjoining Nagaon district’s Rupahitoli village, residents were restively fishing in the floodwaters as the Kopili River continued to inundate the interior roads on its path.

By noon, Rama Deka joined a line of men lowering their Chinese fishing nets inside the water gushing downstream. 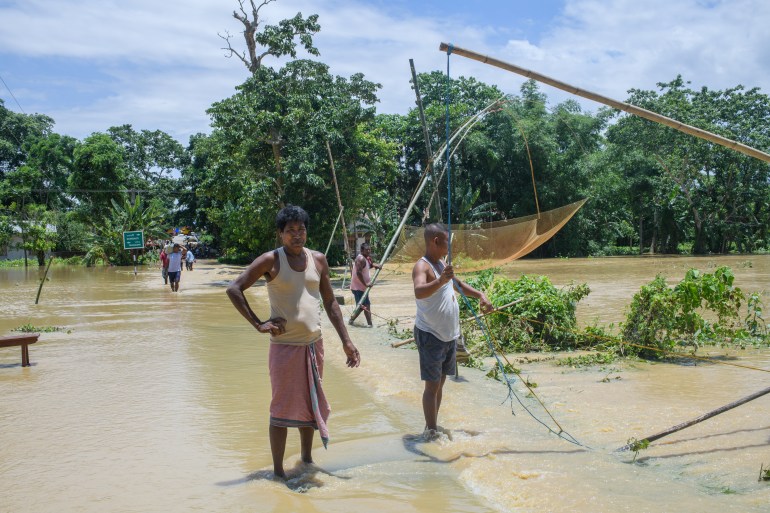 Rama Deka fishing in the floodwater with others in Raha, Nagaon, Assam [Prakash Bhuyan/Al Jazeera]

When the waters first rushed in four days ago, Deka’s mud house and one acre of paddy fields were inundated, causing a loss of more than 50,000 rupees ($650).

“If the water dries down quickly, maybe I can plant mustard,” he hoped. “Otherwise, there will be no farming left to do this year and I will have to go back to doing masonry work.”

Deka was unable to catch any fish that he had hoped to cook with the rice and lentils they had received in relief packets.

Government figures estimate a total of 91,658 hectares (226,492 acres) of crop area has been damaged by the floods, raising urgent concerns of livelihood in a state where agriculture employs 53 percent of the workforce and accounts for 75 percent of the state revenue, directly or indirectly.

Experts are of the view that while floods make the valley fertile, a high level of silt deposition damages the land for paddy cultivation.

“While you can grow other crops in the flood-affected areas, if lesser land is available then it will definitely have a direct impact on food security,” Ananta Saikia who teaches at Assam Agriculture University in Jorhat, told Al Jazeera.

The land crunch, he added, is further compounded by population pressures and the release of water from hydroelectric power plants in the state and neighbouring countries such as Bhutan. 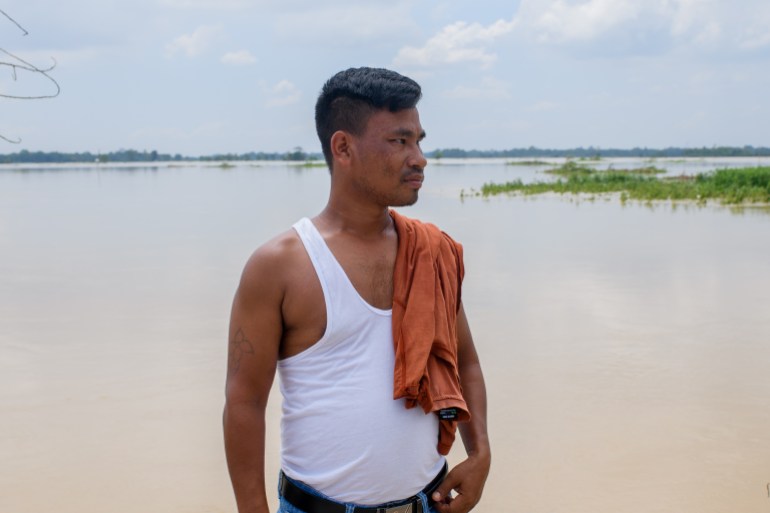 Moina Deka, a resident of Rupahitoli village in Raha, has lost his jute cultivation to the flood [Prakash Bhuyan/AlJazeera]

Islam said village residents in his camp in Nellie are already in dire straits, having lost an average of 2-3 acres (about 1 hectare) of land and even up to 50 acres (20 hectares) under rice cultivation.

“This flood has not only affected those of us living in villages but the entire state. If we don’t farm, what will the people in towns and cities eat?” said Islam, appealing to the government to help the affected farmers with loans to stay afloat.

Unlike Rama, Moina Deka and his friends in Rupahitoli village believe it is futile to spend money and time to sow any crop after the floods recede.

“Even if we plant new crops, it will again get swept away when the river swells during the monsoons,” he said. Monsoons in this region could last up to October.

Staring at a newly constructed bridge now broken in the middle due to the raging floods, the mood in Rupahitoli is sombre as residents think of Magh Bihu, Assam’s biggest festival that marks the end of the harvest season in January-February.

“We celebrate by eating rice freshly cut from our fields,” said Moina. “But when there will be no harvest at all, what would be the meaning of Bihu?”