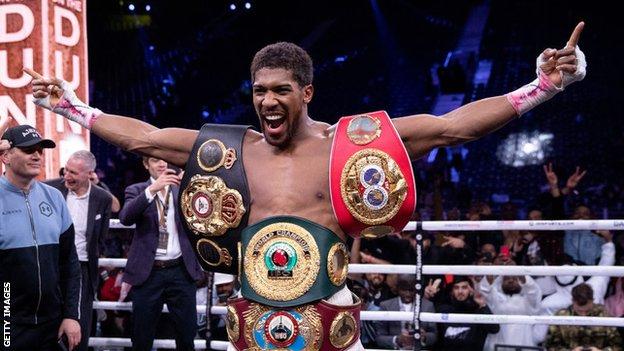 Fury, 33, was forced to shelve plans to fight Joshua after being ordered by an arbitrator to face Deontay Wilder, leaving fans gutted to see the undisputed showdown fall through.

Joshua defends his WBA (Super), IBF and WBO belts against Oleksandr Usyk next and AJ's promoter says he would be shocked if the Fury fight did not happen.

"I had zero support from Fury's team to get that fight made," Hearn said on BBC Sport's The Final Say.

"I don't want to speak badly about Fury's team, but I don't trust them. Really, we've got to look after ourselves and our own business, which is Oleksandr Usyk. The only thing that matters right now is that fight.

"I believe that Tyson Fury would fight Anthony Joshua. We know it's the biggest financial fight in boxing. I know for a fact AJ would fight Tyson Fury. I would be shocked if both won their upcoming fights and we didn't see that fight."

Team AJ has blamed Team Fury for the fight collapsing, while Fury's co-promoter Frank Warren has repeatedly insisted a deal was never signed.

Joshua opted to face his WBO mandatory Usyk after Fury signed to fight Wilder again - and Hearn revealed the 31-year-old would never entertain relinquishing one of his titles.

"The dream has always been to be undisputed," the Matchroom boss said of Joshua.

"But AJ loves that, he loves the challenge. He loves to know how good he is. He wants to show the world how good he is on Saturday night.

"Not just by knocking him out, but by outskilling him as well."

WBO cruiserweight champion Lawrence Okolie joined Hearn and Steve Bunce on The Final Say and is expecting another knockout from Joshua.

Groves: Usyk could be AJ's toughest testAlvarez and Plant brawl during face-off

Okolie is close friends with Joshua, who also acts as his manager, and predicted size would be a big factor against Usyk, who recently stepped up from cruiserweight.

"He looks amazing. I don't think it's about outskilling," he said.

"I feel like the size is going to matter in this fight. Not that AJ is going to go and grab hold of him. But when AJ does land, and he will land, with 60,000 screaming, we'll see how Usyk takes it.

"AJ is a seasoned world-level, world champion, one of the best in the world full stop. I feel like that will be a big factor.

"It's not going to be Usyk against a good heavyweight that's big, it's going to be one that knows why he's punching this place at this time. As much as Usyk's got his own ambitions, I feel like reality will show itself on the day."

How has Wayne Rooney dealt with anger? Listen now as he tells Tony Bellew what makes him see redCan Emma Raducanu's win halt participation decline? The Sports Desk Podcast goes beyond the headlines to find out