Archer returns against England after 16 months out 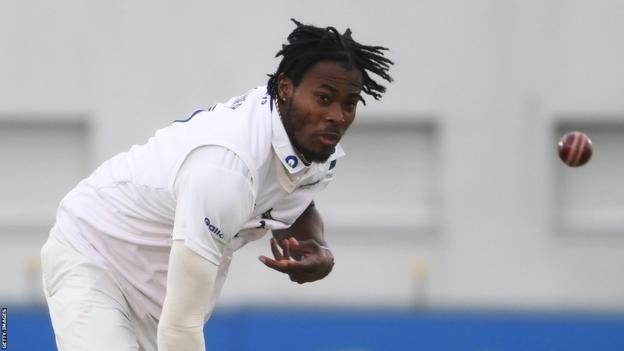 Jofra Archer's most recent game was for Sussex in July 2021

Pace bowler Jofra Archer made his first appearance for 16 months as he lined up for England Lions against England in a tour match in Abu Dhabi.

Archer has not played for England since March 2021 because of elbow surgery and then a stress fracture of the back.

He took 0-38 from nine overs on the opening day of the three-day game.

Pope, standing in as captain in Ben Stokes' absence, helped England score at more than six an over at the Tolerance Oval.

Will Jacks, who could make his Test debut against Pakistan, smashed 84 from 48 balls from number eight.

Liam Livingstone - part of England's T20 World Cup-winning side this month - hit 36 from 23 balls in his first red-ball match since September 2020, while Ben Foakes ended the day 48 not out.

Archer, whose workload is being monitored by the England management, will bowl a limited number of overs in the game.