As COVID cases surge in India, what next for the economy?

New Delhi, India – A “tsunami”. That is how a doctor at a government-run hospital in the Indian capital, New Delhi, described to Al Jazeera the latest wave of COVID-19 infections. The medic declined to be named for fear of reprisals.

India’s tally of new COVID-19 cases hit a new record of more than 270,000 on Monday, pushing its total to more than 15 million, the second-highest globally after the United States. And on Tuesday, it reported 1,761 deaths due to the coronavirus, another record. Hospitals are struggling to cater to patients in need of beds, oxygen and medicines, and social media is flooded with cries of help for those services.

The new surge in cases has not prevented political parties from holding mass rallies as several states go to the polls, even as some states, including New Delhi, announced localised lockdowns and curfews.

All of this is likely to eventually take a toll on the country’s economic recovery, some economists say.

How has the Indian economy held up so far?

Surprisingly well. After shrinking by a record 24.4 percent in the three months through June 2020 – which was “consistent with the stringency of the lockdown” the government imposed at the time, according to Barclays India Economist Rahul Bajoria – economic activity picked up and eked out a growth rate of 0.4 percent for the quarter ending December compared to the same period the year before, latest figures show. 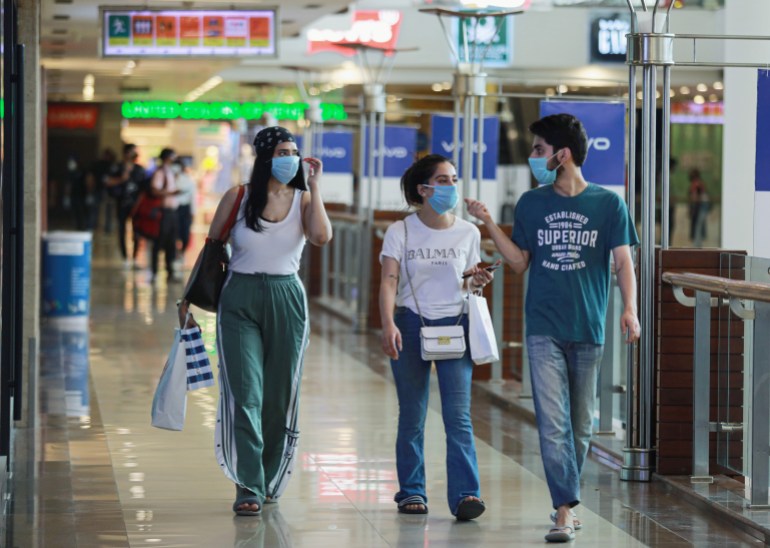 Economic activity has picked up in the past few months, helping boost the economy [File: Anushree Fadnavis/Reuters]Apart from government stimulus measures, at least some of the growth was fueled by “revenge consumption” among higher-income groups as they spent money that would otherwise have been spent on travel, says Bajoria.

So how is the latest wave of infections going to affect the economy?

Since the recent surge is, well, relatively recent, its effect has yet to be reflected in economic data. From an economic perspective, the main difference between the first COVID-19 outbreak last year and this year’s is that this time around the government is not trying to shut businesses down.

But allowing economic activity to continue now could fuel the spread of the virus, which may be bad for the businesses later on.

Is another national lockdown likely?

The second wave has set off fears of another national lockdown. Last year’s lockdown, one of the world’s strictest, was implemented with a mere four hours’ notice, trapping many with little access to basic services. So one cannot really blame the rumour mill for being on overdrive of late.

How are people reacting?

Some of the migrant workers who usually leave the cities for their rural villages in the summer to harvest crops are heading back earlier than they typically would in case they get caught unawares once again. It is still too early to say how many are leaving and how their early departure will affect businesses in the cities. And while hardly anyone expects the country to be locked down like last year, it remains anyone’s guess as to how the virus may progress and what actions the federal or state governments may take in response. “Economic loss will build up overtime,” says Barclays’ Bajoria.

For now, the International Monetary Fund is forecasting India’s growth rate for 2021 to be 12.5 percent but has warned that “the current surge in infections presents a worrisome downside risk.”

Which sectors are likely to be affected the most if things get worse?

Sectors such as malls, travel and tourism, spas and salons will most likely bear the brunt of the second wave as Indians once again hunker down at home to avoid getting infected. For instance, the country’s civil aviation minister tweeted that on 17 April about 182,000 boarded domestic flights. That was down from around 313,000 in late February, the highest since these flights resumed last May.

Some of this is bound to spill over into the so-called informal sector as well. Street vendors operating food and drink stalls or neighbourhood kiosks that sell items such as loose cigarettes and snacks could be among the first to lose out if cases continue to rise.

Why does that matter?

The vast majority – 90.7 percent (PDF) – of India’s workers operate in the informal sector, without written contracts, paid leave, health benefits or social security, according to the International Monetary Fund’s latest available data. So a prolonged period of uncertainty could affect hundreds of millions of India’s poor and that could again hurt growth.

What else is likely to be affected?

Taxes! Aviation, tourism, fuel, and so-called sin goods such as alcohol and cigarettes are some of the most highly-taxed sectors in the country. A dip in government revenues from these would represent money that could otherwise be used to ramp up India’s vaccination rollout or meet any of its myriad other needs.

So how does India get the pandemic under control while keeping the economy humming along? 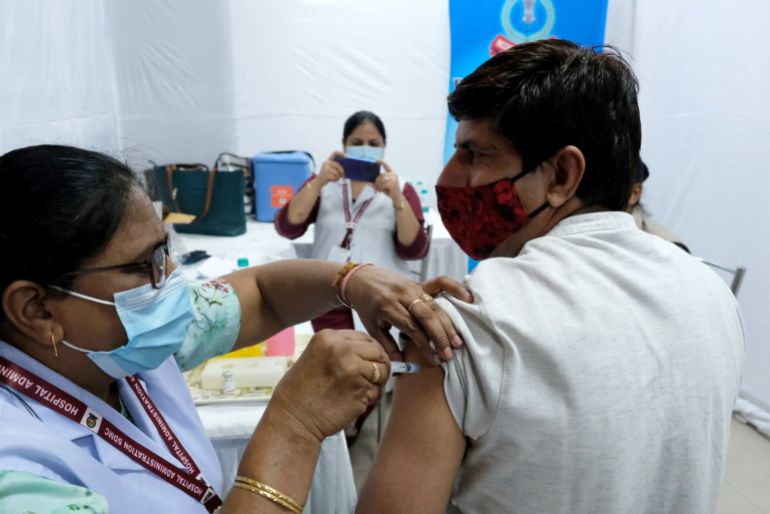 After a slow rollout, the pace of vaccination picked up in India [File: T. Narayan/Bloomberg]Vaccinate, vaccinate, vaccinate, say the experts. India is currently administering the AstraZeneca vaccine and a home-grown one by Bharat Biotech. After an initially slow rollout, vaccinations have picked up pace and India is on track to achieve its goal of vaccinating 300 million people by August and about 500 million by December, a process that will ensure that the economic recovery continues.

As of April 11, the rate of vaccines being administered was averaging 3.6 million shots a day, with nearly 26 million vaccines administered in the week ending 10 April, according to a Barclays report sent to Al Jazeera, bringing it in line with the US in terms of the pace of vaccinations.

That sounds good. So India’s getting things under control then?

It may be difficult for India to continue at that pace as demand outpaces supply and with several states reporting a shortage of vaccines. With the federal government opening vaccine access to everyone above the age of 18 from May 1, demand is set to shoot up even more.

To deal with that shortage in the midst of the ongoing surge, New Delhi has said it will fast-track emergency approvals for COVID-19 vaccines that have been authorised by Western countries and Japan. In other words, it’s eliminating (or at least reducing) bureaucracy to allow imports of Pfizer-BioNTech, Johnson & Johnson, Novavax and Moderna shots and has also approved the use of Russia’s Sputnik V.

There’s hope for India’s people and its economy. But it is going to be a race against time and the emergence of new, possibly more infectious variants of the virus.