While India remains on track for economic recovery, it is vulnerable to global spillovers, rises in cases from variants.

India’s central bank has held rates at record low to support growth, flagging risks from inflation and possible disruptions to activity from the new Omicron variant of the coronavirus.

Even as the Reserve Bank of India retained its accommodative policy stance, it outlined plans to drain surplus liquidity in the banking system on Wednesday, raising the chances of a rise in a key borrowing rate early next year.

“Broadly, the policy is more dovish than expected, possibly given the uncertainty from the new COVID variant,” said Suvodeep Rakshit, a senior economist at Kotak Institutional Equities.

“If the Omicron variant is benign, we expect a reverse repo hike of around 20 [basis points] possibly in the February policy and a tad more aggressive liquidity withdrawal.” Basis point is a fractional unit of a percentage and one basis point is equal to one-hundredth of a percent.

The central bank’s monetary policy committee (MPC) held the lending rate, or the repo rate, at 4 percent. The reverse repo rate, or borrowing rate, was also kept at 3.35 percent.

All 50 economists polled by the Reuters news agency had expected no change in the repo rate and did not expect a change before the second half of 2022.

“Given the slack in the economy and the ongoing catching up of activity, especially of private consumption, which is still below its pre-pandemic levels, continued policy support is warranted for a durable and broad-based recovery,” Governor Shaktikanta Das said in a virtual address.

Das said the MPC voted unanimously to maintain the status quo on the repo rate and by a majority of 5-1 to retain the accommodative policy stance. 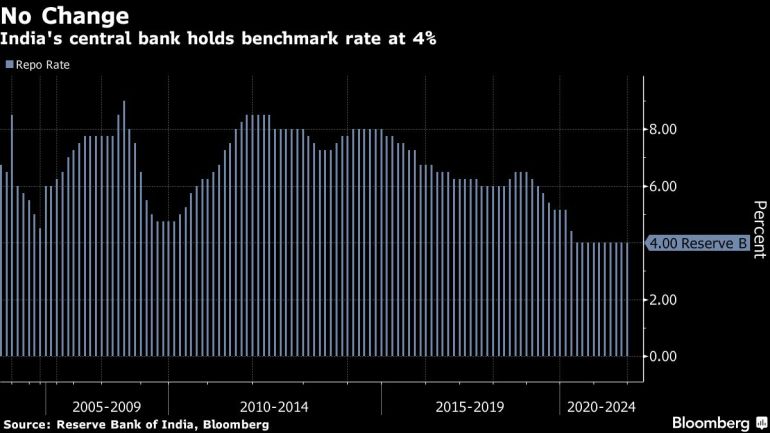 The benchmark 10-year bond yield dropped to a session low of 6.35 percent after the policy decision, compared with the previous close of 6.39 percent, while the Indian rupee was little changed at 75.45 per dollar.

The MPC retained its full-year economic growth projection at 9.5 percent and also kept its retail inflation outlook unchanged at 5.3 percent.

Inflation has been within the RBI’s 2-6 percent target range in recent months but Das said inflation could trend higher in the immediate future and sustained high core inflation was a matter of policy concern.

The RBI has slashed the repo rate by a total of 115 basis points (bps) since March 2020 to soften the blow from the coronavirus pandemic and strict containment measures.

As expected, the central bank increased the amount of cash it absorbs through the 14-day variable rate reverse repo (VRRR) auctions, to continue to rebalance the liquidity surplus in the banking system, but it refrained from giving any signal of a permanent withdrawal of liquidity.

“RBI will continue to rebalance liquidity conditions in a non-disruptive manner while maintaining adequate liquidity to meet the needs of the productive sectors of the economy,” Das said.

Das said the Indian economy was relatively well-positioned on the path to recovery, but it cannot be immune to global spillovers or to possible surges of infections from new mutations including the Omicron variant.

“The MPC regarded the accentuation of headwinds emanating from global developments as the main risk to domestic outlook, which is now somewhat clouded by the Omicron variant,” he said.

India’s economy expanded 8.4 percent in the September quarter from a year earlier, the fastest pace among important economies.