The killing of Iran’s top nuclear scientist is likely to impede the country’s military ambitions. Its real purpose may have been to prevent the president-elect from resuming diplomacy with Tehran. 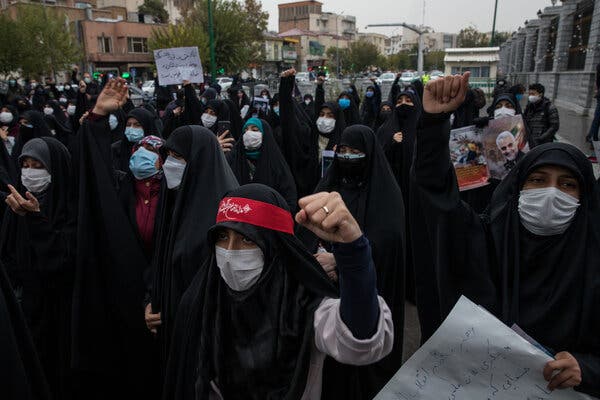 Protesters demonstrating against the killing of a top Iranian nuclear scientist in Tehran, Iran on Saturday.Credit...Arash Khamooshi for The New York Times

WASHINGTON — The assassination of the scientist who led Iran’s pursuit of a nuclear weapon for the past two decades threatens to cripple President-elect Joseph R. Biden Jr.’s effort to revive the Iran nuclear deal before he can even begin his diplomacy with Tehran.

And that may well have been a main goal of the operation.

Intelligence officials say there is little doubt that Israel was behind the killing — it had all the hallmarks of a precisely timed operation by Mossad, the country’s spy agency. And the Israelis have done nothing to dispel that view. Prime Minister Benjamin Netanyahu has long identified Iran as an existential threat, and named the assassinated scientist, Mohsen Fakhrizadeh, as national enemy No. 1, capable of building a weapon that could threaten a country of eight million in a single blast.

But Mr. Netanyahu also has a second agenda.

“There must be no return to the previous nuclear agreement,” he declared shortly after it became clear that Mr. Biden — who has proposed exactly that — would be the next president.

Mr. Netanyahu believes a covert bomb program is continuing, until yesterday under Mr. Fakhrizadeh’s leadership, and would be unconstrained after 2030, when the nuclear accord’s restraints on Tehran’s ability to produce as much nuclear fuel as it wants expires. To critics of the deal, that is its fatal flaw.

“The reason for assassinating Fakhrizadeh wasn’t to impede Iran’s war potential, it was to impede diplomacy,” Mark Fitzpatrick, a former State Department nonproliferation official, wrote on Twitter on Friday.

It may have been both.

Whatever the mix of motives, Mr. Biden must pick up the pieces in just seven weeks. The question is whether the deal the president-elect has outlined — dropping the nuclear-related sanctions Mr. Trump has imposed over the past two years if Iran returns strictly to the nuclear limits in the 2015 accord — was shot to pieces along with Mr. Fakhrizadeh’s S.U.V. in the mountain town of Absard, east of Tehran.

The answer lies largely in how Iran reacts in the next few weeks. Three times since the start of the year, Iran has been on the receiving end of highly visible, highly damaging attacks.

First came the killing of Maj. Gen. Qassim Suleimani, the Iranian commander who ran the elite Quds force of the Islamic Revolutionary Guards Corps, in a drone strike in Iraq, where the Trump administration said he was planning attacks on American forces.

Then, in early July came the mysterious explosion at a centrifuge research and development center at Natanz, a few hundred yards from the underground fuel-production center that the United States and Israel attacked more than a decade ago with a sophisticated cyberweapon.

And now the killing of Mr. Fakhrizadeh, a shadowy figure often described as the Iranian equivalent of J. Robert Oppenheimer, the scientist who oversaw the Manhattan Project more than 75 years ago in the race for the United States to develop the world’s first nuclear weapon.

The chief of staff of Iran’s armed forces, Maj. Gen. Mohammad Bagheri, described Mr. Fakhrizadeh’s killing as “a bitter and heavy blow to the country’s defense system” and said there would be “severe revenge.”

The commander in chief of the Revolutionary Guards, Maj. Gen. Hossein Salami, said “the assassination of our nuclear scientists is a clear, violent war against our ability to achieve modern science.” He carefully avoided mention of the overwhelming evidence that Mr. Fakhrizadeh taught physics once a week at the Guards’ own university, but spent the rest of his time keeping alive the option of building a nuclear warhead that could fit atop one of Iran’s growing fleet of missiles.

The Israelis may well be betting that they win either way.

If Iran holds off on significant retaliation, then the bold move to take out the chief of the nuclear program will have paid off, even if the assassination drives the program further underground.

And if the Iranians retaliate, giving Mr. Trump a pretext to launch a return strike before he leaves office in January, Mr. Biden will be inheriting bigger problems than just the wreckage of a five-year-old diplomatic document.

Both those options seem fine with Mr. Trump’s departing foreign policy team, which is trying to lock in the radical reversal of Iran policy that has taken place over the past four years.

“The Trump administration’s goal seems plain,” said Robert Malley, who leads the International Crisis Group and was a negotiator of the 2015 Iran nuclear deal.

The administration’s plan, he said, was “to take advantage of the time remaining before it heads to the exits to solidify its legacy and make it all the more difficult for its successor to resume diplomacy with Iran and rejoin the nuclear deal.”

Mr. Malley expressed doubts that “it will in fact succeed in killing diplomacy” or the deal.

“The center of gravity in Iran is still with those who want to wait until Biden is president,’’ said Mr. Malley, who has known Mr. Biden’s pick for secretary of state, Antony J. Blinken, since they attended high school together in Paris.

Mr. Biden and Mr. Blinken have made clear that returning to the deal Mr. Trump pulled out of is one of their first objectives in the Middle East.

But as Jake Sullivan, the newly appointed national security adviser, who served as one of the secret emissaries to begin the negotiations that led to the deal, put it on Wednesday at an event at the University of Minnesota, “that’s really up to Iran.”

“If Iran returns to compliance, for its obligations that it has been violating, and is prepared to advance good-faith negotiations on these follow-on agreements,” Mr. Biden is willing to do the same, he said. (While Mr. Biden supported the 2015 deal, he was also in on the decision-making in 2010 as the cyberstrike against Natanz unraveled.)

Before the assassination, there was considerable evidence that the Iranians were laying low, avoiding provocations that might give Mr. Trump a pretense to strike before he leaves office. Iran’s leaders have made clear that regime survival is their No. 1 goal, and they have been careful not to take risks that could upend their hopes of lifting sanctions, and restoring the deal, after Mr. Trump’s term ends.

After the killing of General Suleimani, there was a brief missile attack on an American facility that miraculously killed no American troops (though there were many cases of traumatic concussion injuries that Mr. Trump dismissed as “headaches.”) De-escalation followed.

There was no real response to the explosion at Natanz, also attributed to Israel, other than the subsequent installation of some advanced centrifuges to make the point that Iran’s program would move ahead, slowly and methodically. Attacks aimed at American forces in Iraq, many by Iranian proxies, have diminished in recent weeks, and Iran’s feared cyberattacks on the American election system seemed more like amateur hour — emails to some voters purporting to be threats from a far-right group, the Proud Boys.

But the hard-liners are angry, and some experts fear that the combined loss of Iran’s most revered general and its most revered nuclear scientist is too much. Pressure is already mounting for some response — either a calculated one, presumably on the orders of the supreme leader, Ayatollah Ali Khamenei, or an unscripted lashing out, perhaps by a rogue element of the Iranian military or an Iranian-sponsored militia that does not get the memo to wait for Inauguration Day.

That may be exactly what Mr. Netanyahu — and Mr. Trump and his advisers — is betting on. Any retaliation could result in American military action, exactly what Mr. Trump contemplated, and was argued out of, two weeks ago when news came that Iran was continuing to produce nuclear fuel above the limits of the 2015 accord. (That move, of course, was in response to Mr. Trump’s decision in mid-2018 to break out of the agreement himself.)

American military officials said on Saturday that they were closely monitoring Iranian security forces after Iran’s vow to retaliate for Mr. Fakhrizadeh’s death, but that they had not detected any usual Iranian troop or weaponry movements.

The officials declined to comment on any heightened U.S. alert levels or additional measures to protect American forces in the Middle East, noting that the more than 40,000 troops in the region are already at a relatively high level of alert.

A cycle of military action could make it all but impossible to reconstitute the Iran nuclear deal, much less negotiate a bigger, longer-lasting diplomatic arrangement.

If the response to the killing of Mr. Fakhrizadeh is a cycle of retaliation and counter-retaliation, the nuclear program will go deeper underground — quite literally — where bombs and saboteurs cannot reach it, and cyberstrikes may be ineffective.

“We should not exclude the use of force, but military strikes won’t bring us a long-term shutdown of the program,” said R. Nicholas Burns, a former under secretary of state and the Iran nuclear negotiator from 2005 to 2008 under President George W. Bush.

“Our goal is to roll back and shut down its nuclear program for decades to come,’' said Mr. Burns, who now teaches diplomacy at Harvard’s Kennedy School of Government, and “achieving that through tough-minded diplomacy is still a smarter and more effective option than a military strike that could provoke a wider war in the Middle East.” 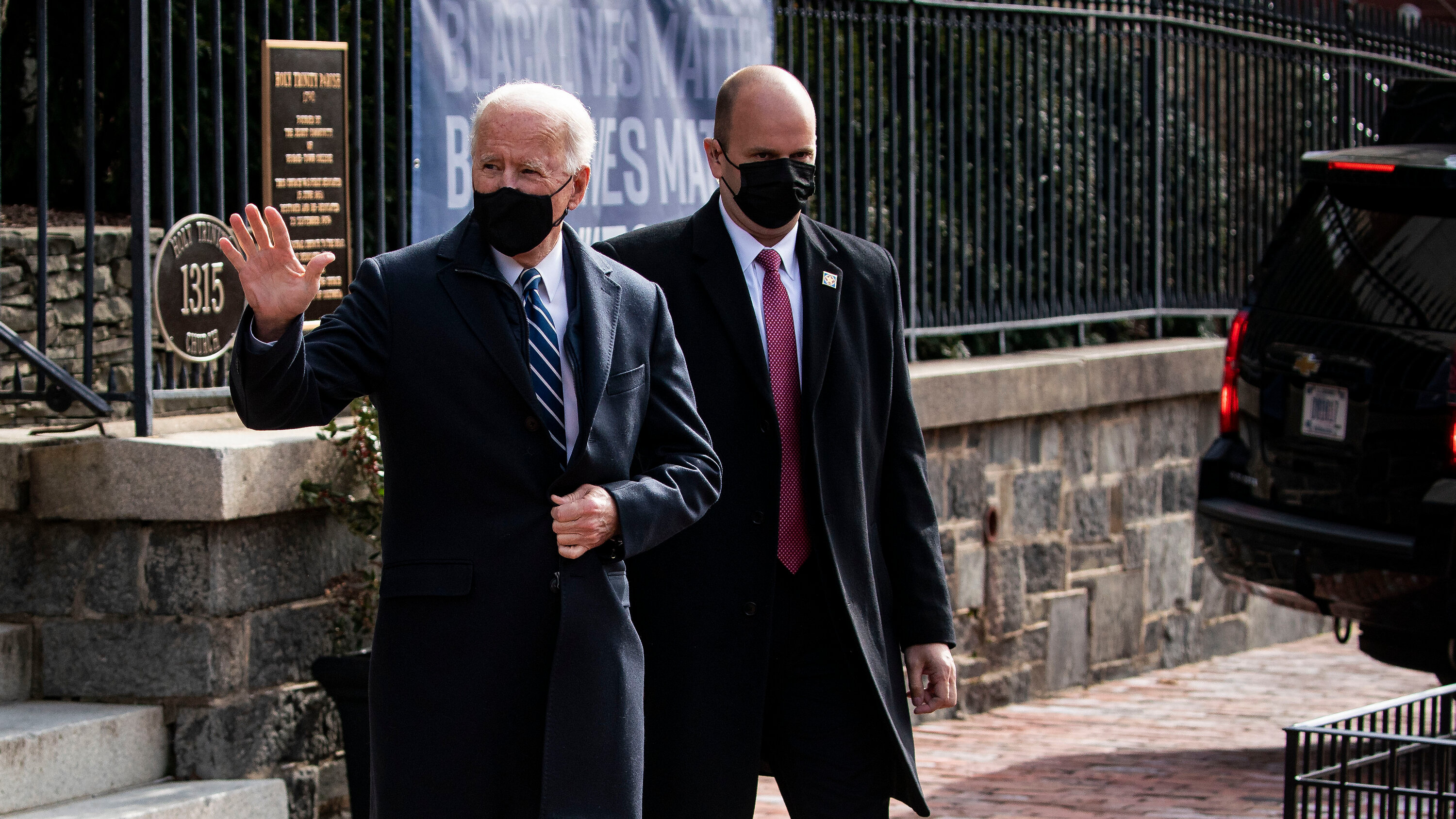 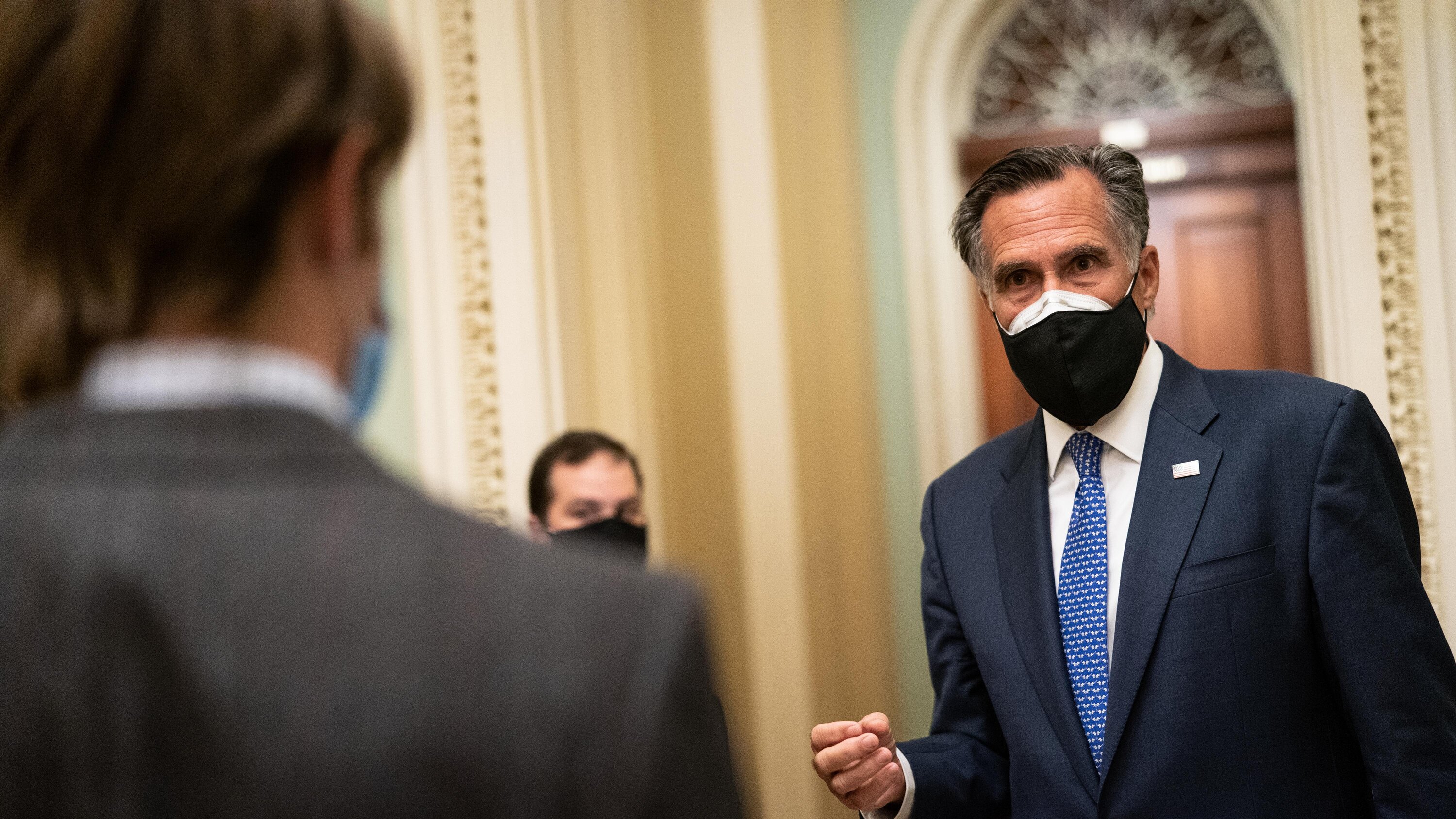 Divisions Harden in Senate as It Prepares to Receive Impeachment Article 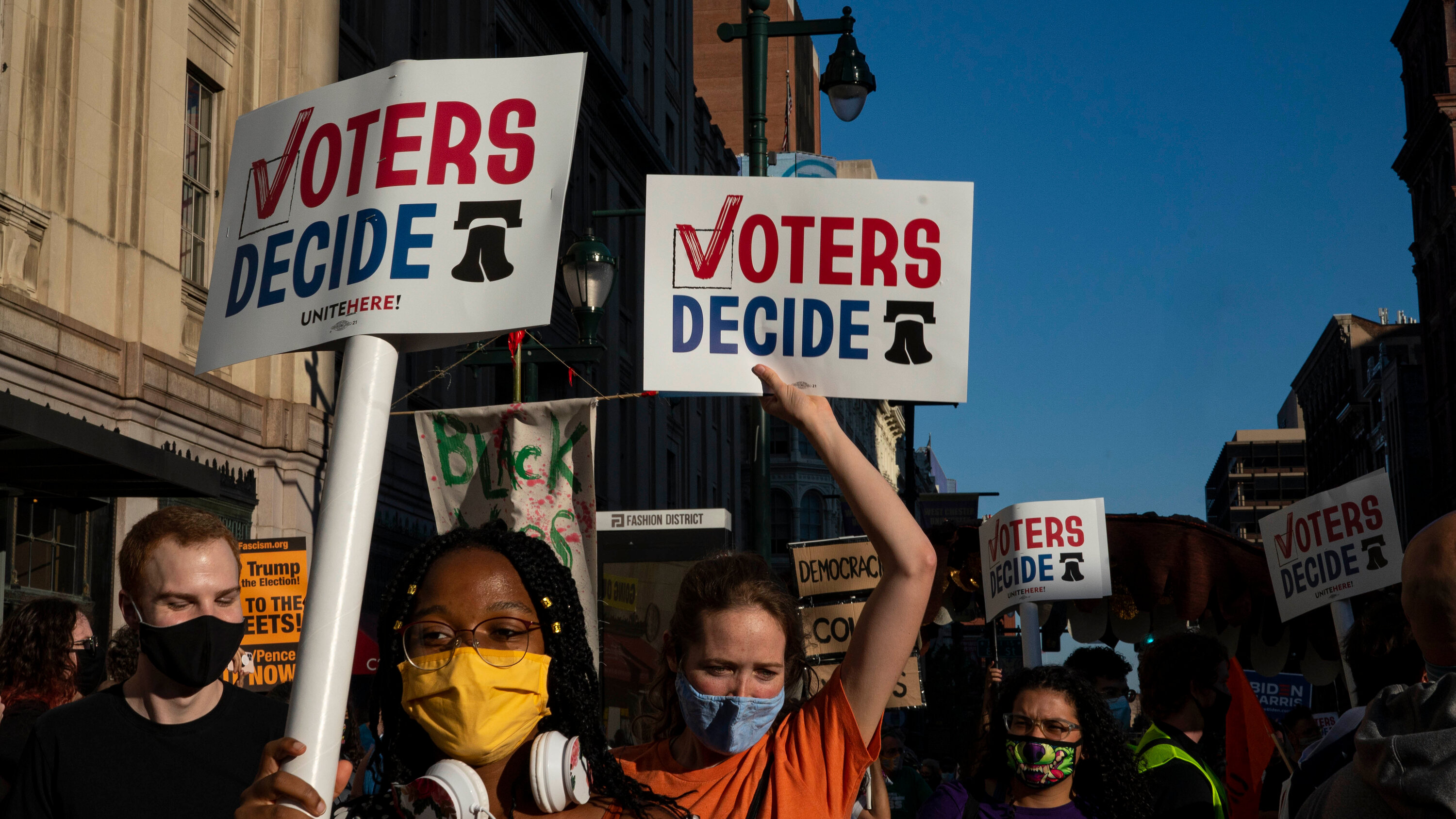 How Democrats Planned for Doomsday 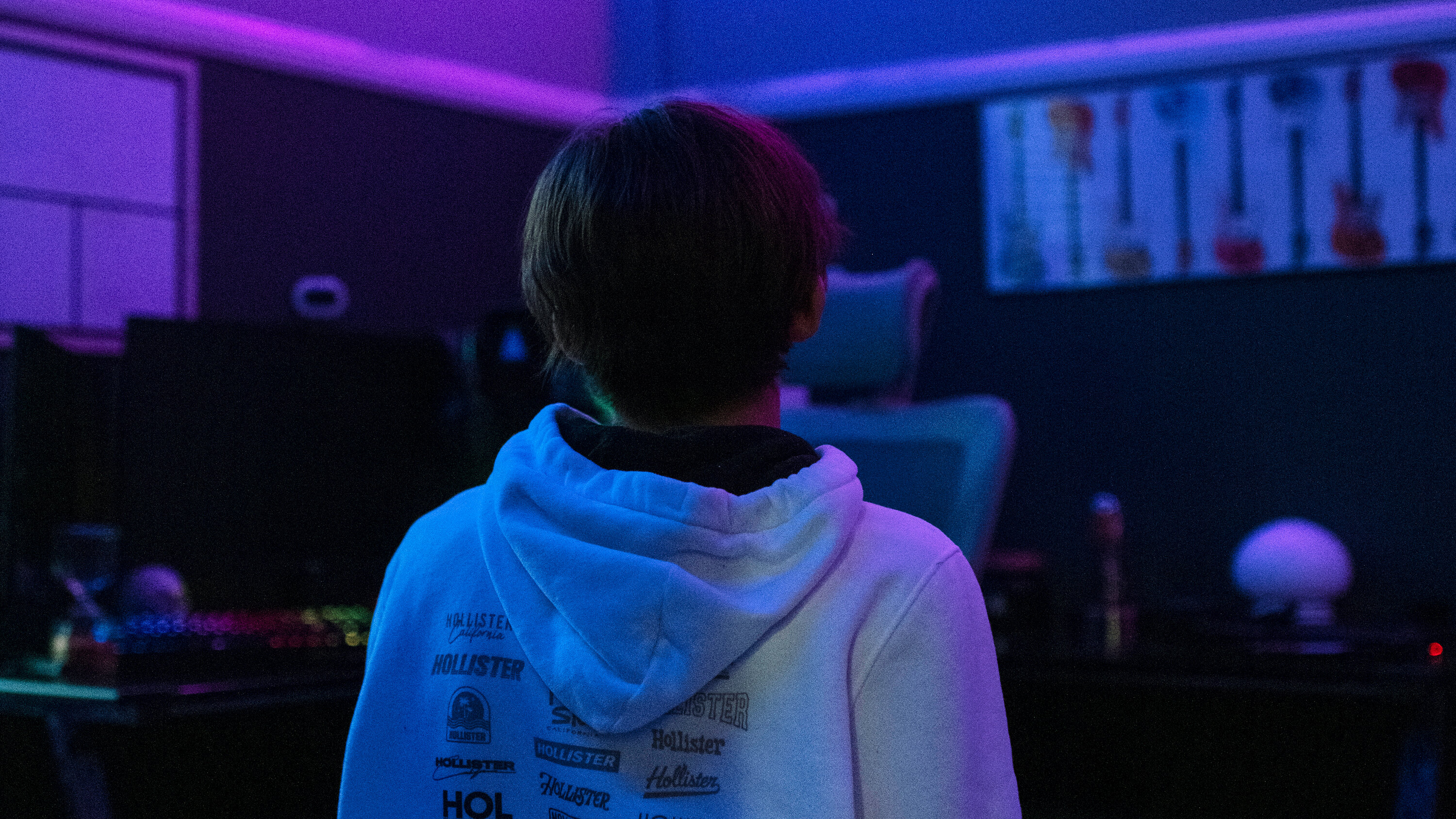 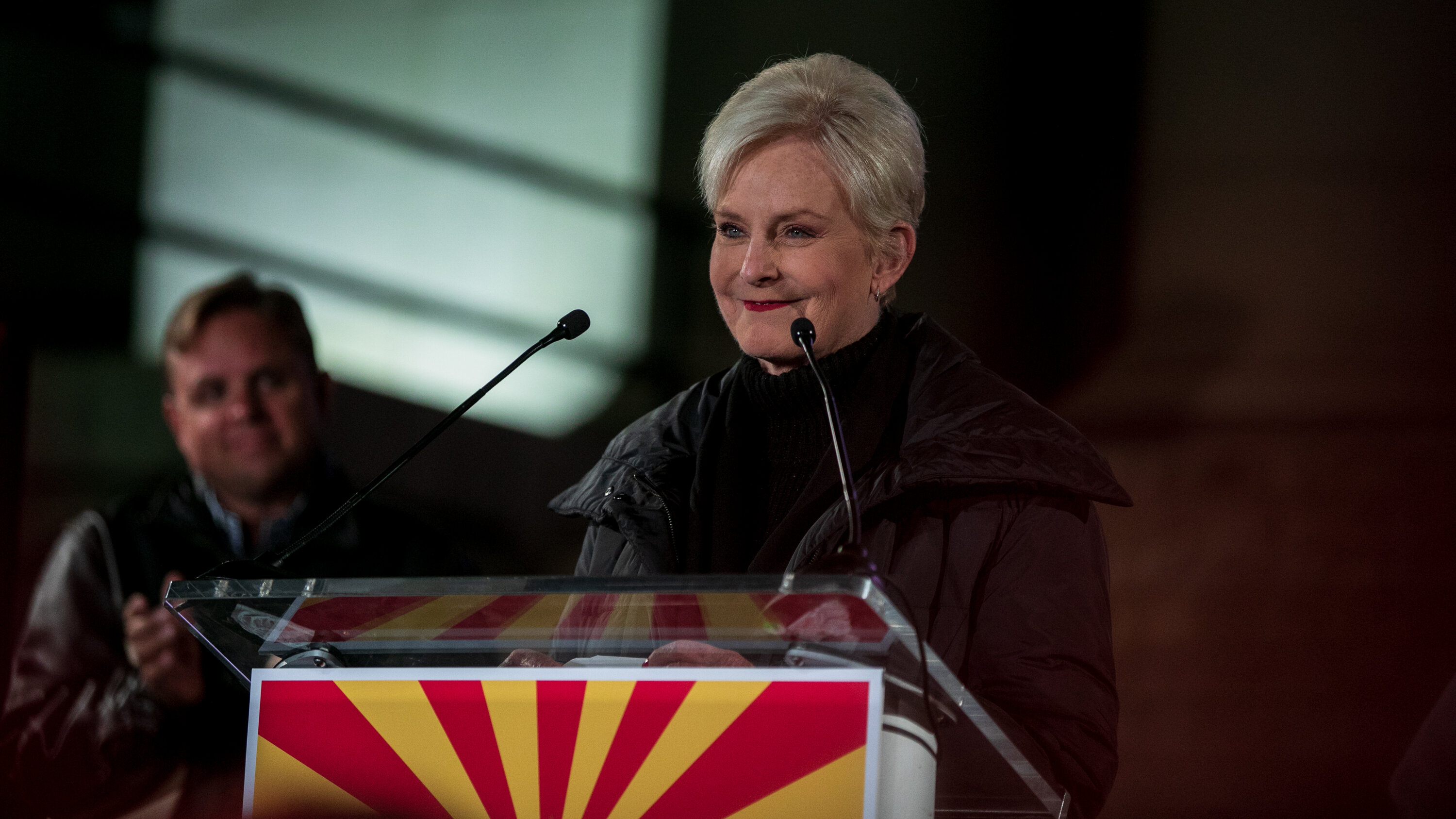 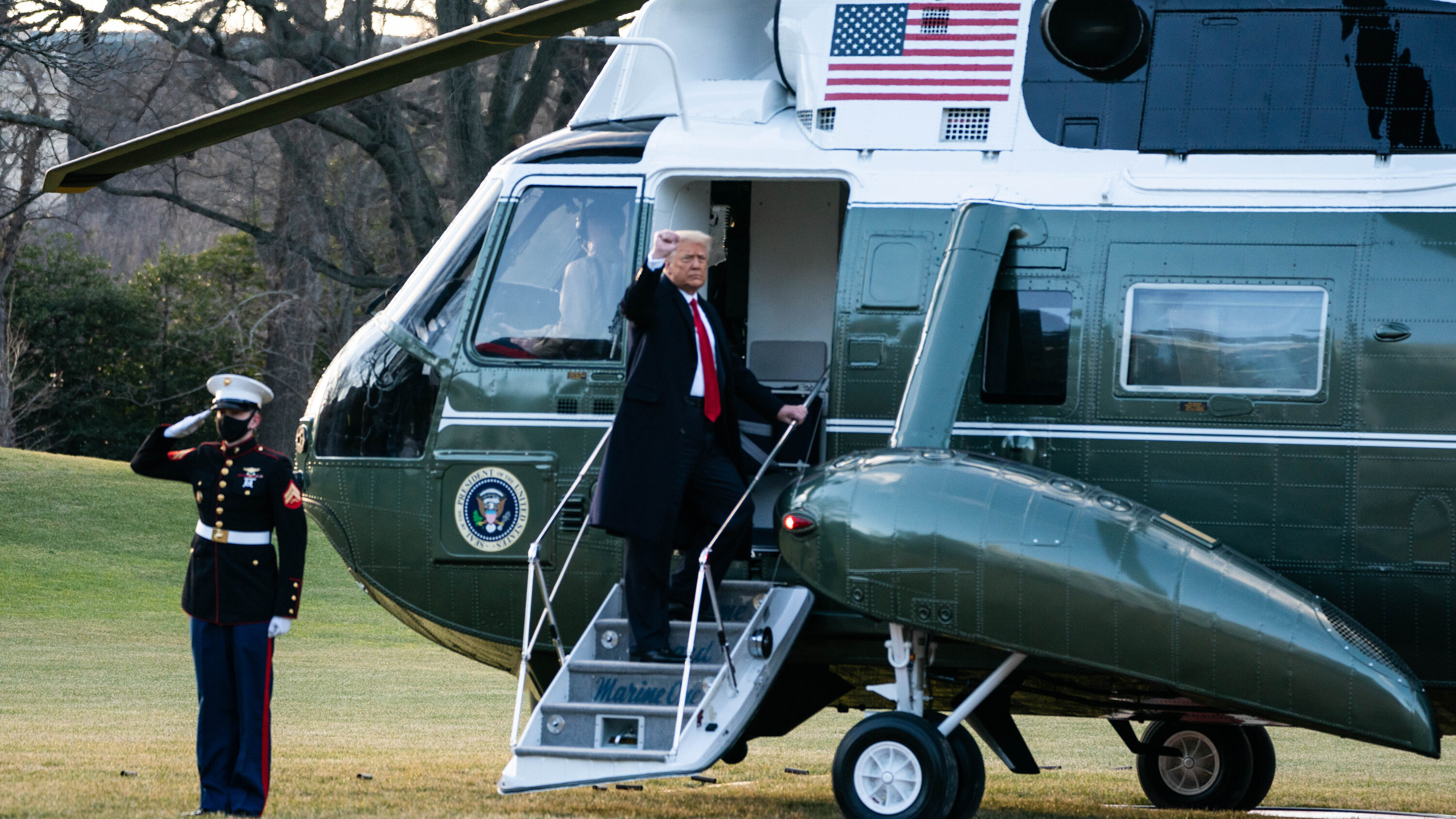 The Trump Presidency Is Now History. So How Will It Rank?