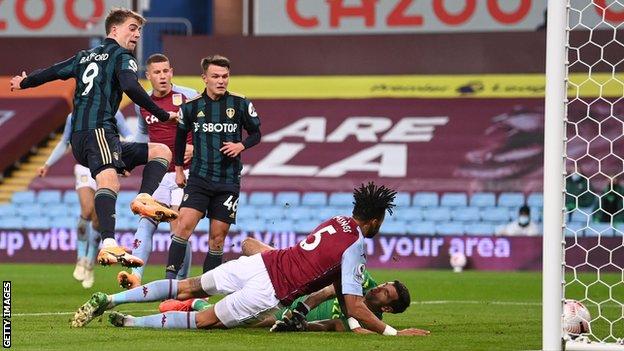 Leeds United ended Aston Villa's 100% winning start and ruined their chance of going top of the Premier League thanks to a brilliant Patrick Bamford hat-trick.

Villa came into Friday's game having won their first four games of a league campaign for the first time since 1930-31, but three expert finishes from the Leeds striker prevented the hosts making it a club record five victories on the spin to open their season.

The result, which lifts Leeds to third, was reward for a relentlessly positive performance from an injury-hit visiting side that should probably have yielded more goals.

In the first-half, Bamford missed with a header and then side-footed wide after being found by Jack Harrison's low cross at the end of swift counter-attacking move.

Dean Smith's Villa team, who had put seven goals past champions Liverpool in their previous home game, saw a Jack Grealish shot cleared off the line by Luke Ayling after the ball had fallen to the midfielder from Trezeguet's miscued shot.

Villa's captain also went close with a saved effort from close range after he had shown great tenacity and skill to carry the ball from within his own half.

But Bamford had the decisive say, finding the corner of the net from just a few yards out after Emiliano Martinez had palmed out Rodrigo's low shot.

If his first was simple, his second and third were stunning - a rising effort into the top corner from 20 yards after he was found by Mateusz Klich on 67 minutes and a dug out, curling finish following Helder Costa's low ball seven minutes later.

Leeds are now two points and a place behind Villa, who remain second, a point behind leaders Everton.

Leeds maybe have not been as spectacular as Villa in the early stages of 2020-21, but they are certainly making their mark on a top flight that had been without them for 16 years.

There were plenty of times during that period when little was missing in their absence, but now - with Marcelo Bielsa in charge - the pleasure is all the Premier League's.

Leeds have already shown they are unwilling to be daunted and compromise their attacking principles, even when facing the elite sides.

And at Villa Park, with influential midfielder Kalvin Phillips and captain Liam Cooper missing through injury and a makeshift defence in place, they took apart the division's form team on their own patch.

Under Bielsa, Leeds create chances but they have not always had the cutting edge to make them count, with Bamford too often frustratingly profligate.

Premier League life with Leeds clearly suits the English striker, though, and Friday's hat-trick took him to six goals in six matches this term. His treble is also the sixth in the top flight already in 2020-21 - after 49 games, it is the earliest that has happened.

Leeds themselves have now scored 12 league goals, the most by a newly promoted club after six games of a season in the competition since Middlesbrough also netted 12 in 1992-93.

It is perhaps in-keeping with what has been a chaotic Premier League season so far that Villa, yet to drop points and whose last appearance on their own ground saw them put seven past Liverpool, would be put to the sword by newly promoted Leeds.

But still it defied all expectation. Villa were second best throughout, unable to compete with the visitors' intensity and energy.

Even Grealish, who has impressed so much, was unable to inspire his side, although he did have moments - not least of all with the solo run that almost brought an opener for the hosts early in the second half.

Bamford's first goal was a big blow, his second sent Villa to canvas and the third knocked them out.

It was a bad night at the office, but Smith's side remain a work in progress - and while he is unlikely to be pleased after defeat, one poor showing in five is a percentage he will surely take.

The key now will be whether Villa can respond to such a ruthless ending to one eight-game unbeaten streak by building another.

Attempt missed. Jack Harrison (Leeds United) left footed shot from the left side of the box is close, but misses to the left. Assisted by Pablo Hernández following a fast break.

Attempt missed. John McGinn (Aston Villa) left footed shot from outside the box is too high. Assisted by Ross Barkley.

Douglas Luiz (Aston Villa) wins a free kick in the attacking half.

Ezri Konsa Ngoyo (Aston Villa) wins a free kick in the defensive half.

Luke Ayling (Leeds United) wins a free kick in the defensive half.

Mateusz Klich (Leeds United) is shown the yellow card for a bad foul.

Attempt missed. Ollie Watkins (Aston Villa) right footed shot from the right side of the box is close, but misses to the left. Assisted by Ross Barkley.

Raphinha (Leeds United) wins a free kick in the defensive half.

Ollie Watkins (Aston Villa) wins a free kick in the attacking half.

Attempt saved. Patrick Bamford (Leeds United) header from the centre of the box is saved in the top centre of the goal. Assisted by Jamie Shackleton with a cross.

Attempt missed. Raphinha (Leeds United) left footed shot from the centre of the box is close, but misses to the right. Assisted by Patrick Bamford.

New drama - Roadkill: Can a government minister outrun the secrets of his past?Bringing Football Back: Behind the scenes of a club reborn 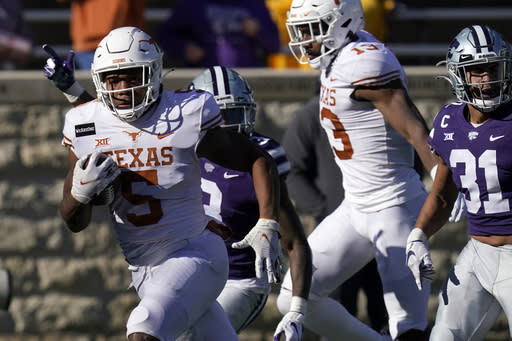 Nebraska holds off Purdue for 37-27 victory

'Happy about where I'm at': Westbrook discusses move to DC