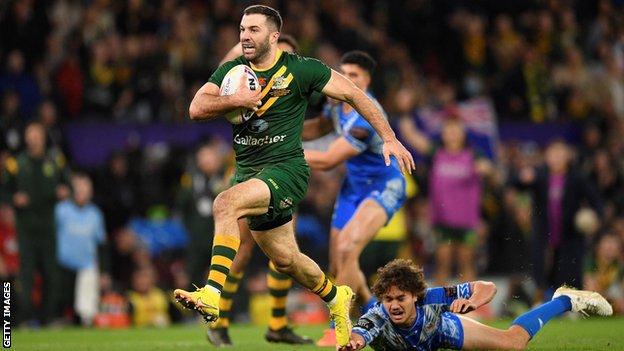 Australia claimed a third consecutive World Cup with a hard-fought 30-10 victory over Samoa at Old Trafford.

While the Pacific Islanders enjoyed the backing of the 67,502 crowd, Mal Meninga's relentless side more than lived up to their billing as overwhelming favourites.

A superb defensive performance laid the foundations for the Kangaroos, who have now won the competition 12 times in total.

And while they were temporarily reduced to 12 men when Angus Crichton was sin-binned for an infringement on Chanel Harris-Tavita, they were still able to withstand several Samoa breaks before going further ahead when Cameron Murray went over in the left corner.

Brian To'o's try briefly raised hopes of a fightback from Matt Parish's team, but they were quickly snuffed out as Nathan Cleary and Cameron Munster cleverly combined to send Tedesco racing in on the angle into the left corner.

Stephen Crichton, the golden point hero against England, ensured a respectable scoreline for Samoa in their first World Cup final with a fine interception try for the second week running.

But it was not enough to prevent Australia from maintaining their stranglehold on the tournament as Mitchell went over in the closing moments to round off the scoring.