Melbourne, Australia — Australia says it will continue to provide military training, conduct joint exercises and export weapons to Indonesia despite increased violence and allegations of human rights abuses in West Papua, in the far east of the archipelago, where conflict has been rumbling for decades.

The Australian Department of Defence confirmed in a statement to Al Jazeera that Anthony Albanese’s government, which was elected in May, would continue to supply arms to Indonesian forces and provide them with military training.

“Indonesia is one of Australia’s most important partners. Australia will continue to conduct joint exercises, provide military and policy training, and – consistent with appropriate legislation – export military equipment to Indonesia,” the statement said.

Despite some rocky patches, Australia has had a longstanding military relationship with Indonesia, including joint training and weapons supply, with Thales Australia selling three Bushmaster troop carriers to Kopassus, Indonesia’s elite forces, in 2014.

Military units, such as Kopassus, conduct joint training exercises with the Australian SAS, the country’s special forces, while Detachment 88 — also known as Densus 88, a counterterrorism force set up in the wake of the 2002 Bali Bombings — gets funding and training from both Australia and the United States.

Such initiatives have been credited with reducing the threat from hardline groups, but Indonesian forces remain under scrutiny over allegations of serious human rights abuses in West Papua, where Indigenous people have been fighting for independence for 50 years.

Indonesia moved into the resource-rich region in the early 1960s, formalising its control through a controversial, United Nations-approved referendum in 1969. 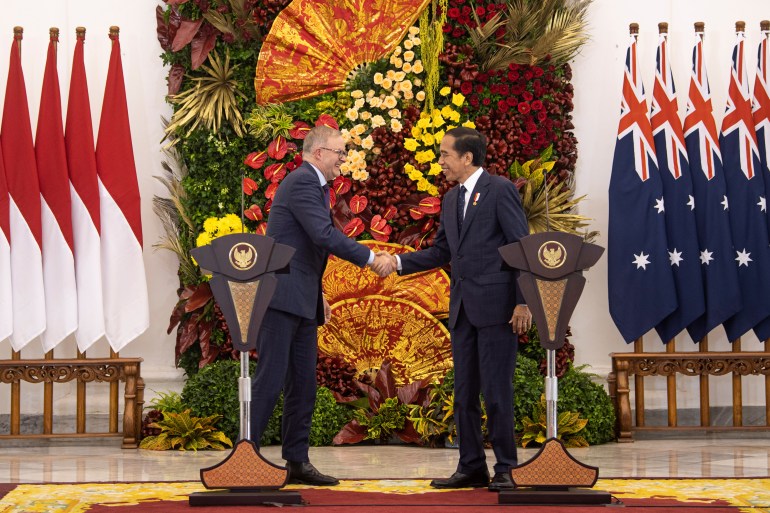 Australian Prime Minister Anthony Albanese (left) made Indonesia his first overseas visit following his election in May – an indication of its importance to Canberra [File: Sigid Kurniawan/Antara Foto via Reuters]

Amid armed resistance from West Papuan independence fighters such as the Free Papua Movement, or Organisasi Papua Merdeka (OPM), which reportedly targeted Indonesian civilians, more military and special forces units were sent to the area.

Although the area was relatively peaceful during the presidency of Abdurrahman Wahid, Indonesian military engagement has remained during the administrations of other presidents, including President Joko Widodo, who is now in his second term.

A recent plan to create three new administrative regions in the area triggered peaceful protests in June where some 44 people were arrested. Amnesty International said the police responded with “an excessive use of force”.

“The Indonesian government claims that it wants to ‘develop’ Papua and create prosperity for Papuans,” said Amnesty’s Indonesia Executive Director Usman Hamid. “But how can Papuans be prosperous if their attempts to express opinions and aspirations are met with violence.”

Even during the pandemic, Papua continued to rumble.

In 2020, an independent report published by UN experts found that at least 50,000 people had been displaced in the province due to violence. It cited allegations of the use of excessive force, torture and killings against indigenous West Papuans by the police or military.

The report also expressed concerns about the lack of access to the area for humanitarian organisations, human rights defenders, journalists and others. 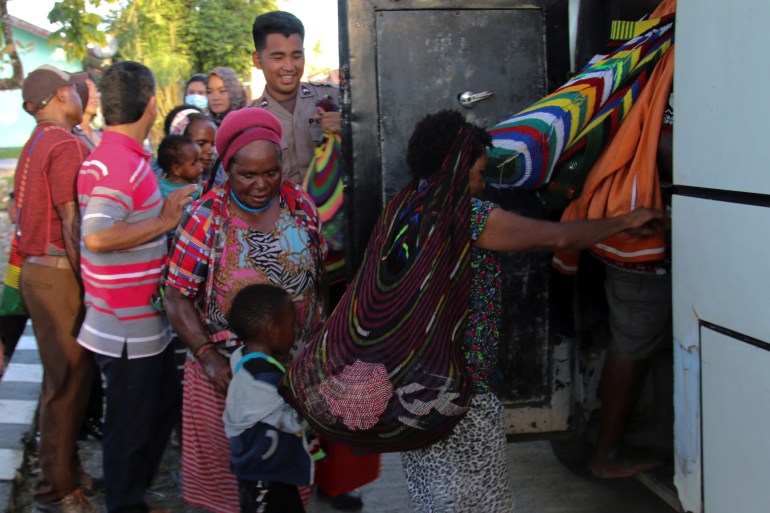 Sporadic outbreaks of violence between Papuan separatist rebels and the Indonesian military have forced villagers from their homes. A UN report in 2020 estimated at least 50,000 had been displaced [File: Sevianto Pakiding/Antara Foto via Reuters]

In the first six months of 2021, more than 6,000 people were forced to leave their homes due to ongoing violence between armed fighters from the pro-independent West Papuan groups and the Indonesian military, according to Amnesty.

Over the same period, 188 Papuan university students were arrested for staging peaceful protests, according to Amnesty. As of July 2022, at least 13 Papuan activists remain behind bars for “exercising their right to express political views”, including prominent independence activist Victor Yeimo who has been charged with treason.

Indonesian-based Human Rights Watch researcher Andreas Harsono told Al Jazeera that while “to some degree, the use of force in Papua is justified”, the rights of peaceful protesters and civilians were also being abused.

“Even wearing the Morning Star flag [the symbol of West Papuan independence] might see them prosecuted and jailed,” he said, noting that the refusal to allow outsiders access to the region meant such abuses went largely unreported.

Harsono argued Australia should be obligated to address such human rights issues in its joint training with Indonesian forces, accusing officials of “closing their eyes” to the abuses.

“I hope Australia can change their military cooperation with Indonesia to be more oriented to human rights,” he said.

Human Rights Watch and Amnesty say Indonesian operations against West Papuans are increasingly referred to as “anti-terrorism” activities to justify brutal crackdowns, with Amnesty reporting that “military and police personnel often justify the killing of Papuan residents by claiming that they were members of the Free Papua Movement (OPM) or ‘armed criminal groups’ without any clear evidence”.

“Indonesia is committing terrorism against my people through their illegal occupation,” Wenda told Al Jazeera from his base in the United Kingdom: “We do not fight Indonesian people in Jakarta, in Java, but Indonesia comes to my land and terrorises my people. They are conducting an illegal war through their military forces in West Papua.”

Indonesia’s Ministry of Defence spokesperson Dahnil Azhar Simanjuntak was contacted by Al Jazeera for this article but did not respond to questions.

Albanese made Indonesia his first international port of call after taking office.

He was seen cycling with Widodo through the grounds of the Presidential Palace and pledged closer economic ties.

Also on the trip was Foreign Affairs Minister Penny Wong — who addressed students in Jakarta in Bahasa — and one of the first-ever Muslim Australian federal ministers, Ed Husic, who has the industry and science portfolio.

Albanese was also accompanied by 12 executives representing industries from agriculture to commodities, including Chris Jenkins, CEO of the Australian division of Thales.

Despite the displays of goodwill, Australia’s relationship with its populous northern neighbour has often proved challenging, a situation underlined by Australia’s support for an independent East Timor in 1999. 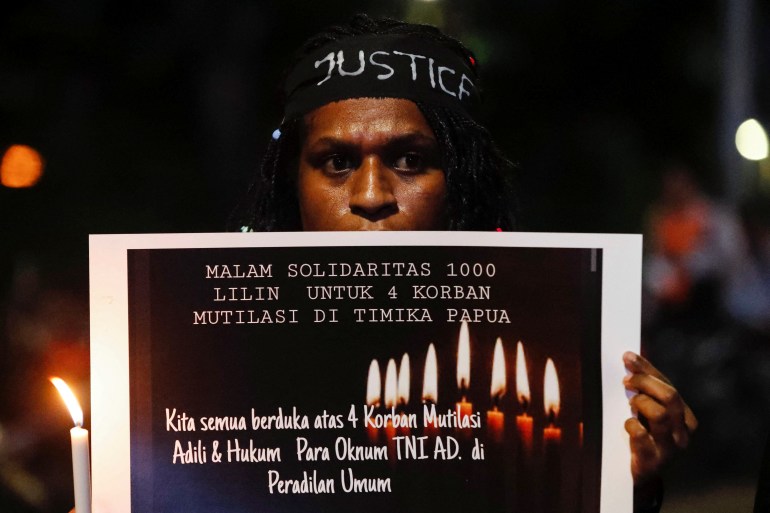 A demonstrator holds a sign and a candle during a protest in Jakarta last month to demand justice following the deaths and mutilation of four civilians in Timika in Papua [File: Ajeng Dinar Ulfiana/Reuters]

Adolf Mora was one of them.

“At that time, I was politically a student activist on the ground in West Papua,” he told Al Jazeera.

“We believe as Indigenous [West Papuans] we should have the right to self-determination and to have independence in West Papua.”

Mora told Al Jazeera that he and fellow student activists were forced to flee because of attacks by Indonesian security forces.

“It was very scary. The military powers and the intelligence, the police and the army itself came to the university. They were shooting at student activists who were actively doing the protest against the government.”

The group arrived in Australia in a traditional long-boat canoe.

“The last option was to leave West Papua and come across to Australia. We [thought] by reaching out to the international community our voice could be heard,” he said.

“We need[ed] protection — not just protection but to clarify that there are injustices still happening in West Papua, that people are being killed in every corner in West Papua in the villages.”

The 43 Papuans were granted refugee status in Australia and, amid the diplomatic fallout, a new treaty between the two countries was drafted. 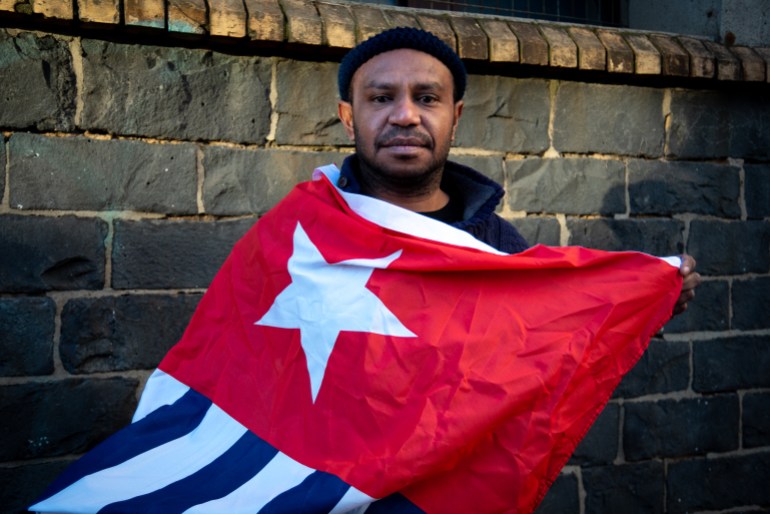 Adolf Mora wraps the Morning Star flag of West Papuan independence around his shoulders. Mora was one of 43 West Papuans who arrived in Australia in 2006 and were allowed to stay [Ali MC/Al Jazeera]

The Lombok Treaty outlined a new agreement between the two countries, strengthening bilateral commitments to cooperate on “defence, law enforcement, counterterrorism, maritime security, and on emergency management and response”.

The Treaty also entailed a commitment to “strong support for each country’s sovereignty and territorial integrity, including Indonesia’s sovereignty over Papua”.

In a statement to Al Jazeera, the Australian Department of Foreign Affairs and Trade said the Albanese government would continue to uphold the Lombok Treaty and support Indonesia’s claims of sovereignty over West Papua.

“Australia recognises Indonesia’s territorial integrity and sovereignty over its Papua provinces, as underlined in the 2006 Lombok Treaty,” the statement said.

Camellia Webb-Gannon, a lecturer and coordinator of the West Papua Project at the University of Wollongong and author of Morning Star Rising: The Politics of Decolonization in West Papua, told Al Jazeera the Lombok Treaty was “essentially a gag”.

“Each country agreed not to support or participate in activities that would challenge the territorial integrity or sovereignty of either country,” she said.

“Essentially that was Indonesia trying to say to Australia ‘you won’t say anything further about West Papuans or about human rights abuses’.”

Webb-Ganon argues Australia should take a more robust approach as it did in East Timor, but the geopolitical situation in the region has changed significantly in the past 20 years.

Not least China’s growing influence in the South China Sea and its testy relationship with Canberra. 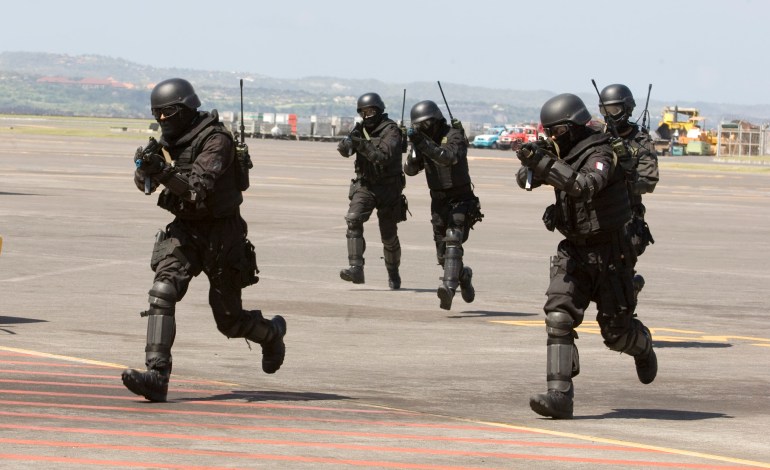 Professor Tim Lindsey, director of the Centre for Indonesian Law, Islam and Society at the Melbourne University Law School, told Al Jazeera Australia needed the close ties with its northern neighbour outlined in the Lombok Treaty for security reasons.

“Indonesia would be extremely important strategically in the event of real conflict in the South China Sea,” he said. “What it is, is Australia’s shield.”

He believes a close relationship might prove beneficial to addressing concerns about human rights.

“If your objective is to minimise human rights abuses in places like Papua then you are going to have a lot more capacity to influence government if they see you as a friend than if you are just what they consider to be a megaphone telling them what to do from a distance,” he said.