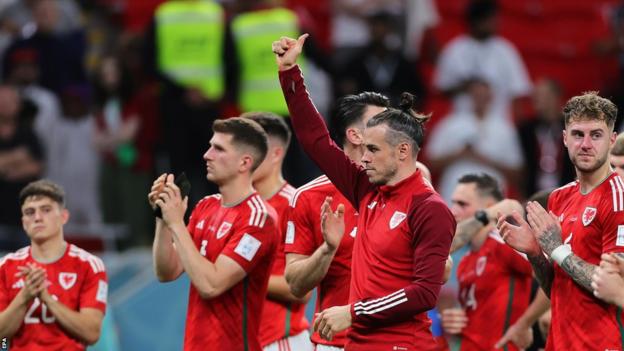 Captain Gareth Bale said he will continue playing for Wales for "as long as I'm wanted" after defeat to England sealed their World Cup elimination.

Bale, 33, says he will be back for international duty when Robert Page's side begin Euro 2024 qualifying next March.

"It's a difficult moment now obviously but we go again. We have a qualifying campaign starting in March.

"We have a few months to get away from international football which is disappointing, we would love to have stayed [at the World Cup] longer, but we go again in March."

There has previously been speculation that former Real Madrid forward Bale would retire after this World Cup, Wales' first since 1958.

Page's team leave Qatar having taken only one point from three group games and with a feeling that they have not done themselves justice at the tournament.

Bale, the nation's most-capped male player, is one of a number of senior figures in the Wales squad, but he rejected the suggestion that this World Cup could be a landmark moment for Page's team.

"Just because we have had a difficult tournament, it doesn't mean it's an end of an era," Bale said.

"This group is sticking together. We have a great team spirit and we will go again like we always do."

Bale was substituted at half-time against England. He said afterwards that he had felt tightness in his hamstring before kick-off which worsened during the game and that it would have been "selfish" to stay on because he was unable to sprint.

Having recovered from a poor first-half performance to draw their World Cup opener against the USA - thanks to Bale's late penalty - Wales were deservedly beaten by Iran before England secured what was ultimately a comfortable victory.

"But football is difficult and I think we also need to realise we have come a long way in qualifying for this World Cup.

"We are all disappointed, but the one thing we can all hold our heads high [about] is that we gave everything on the pitch.

"Even though maybe the performances and results weren't there, we all worked our socks off, we all stuck together, our fans were incredible like always and we are all proud of where we have come.

"We have to take these experiences and use them wisely and learn from the mistakes we have made and yeah hopefully we can start again in March to qualify for the Euros."

Page said Wales should not be disappointed despite failing to reach the knockout stages for the first time in their four major tournament appearances.

"I thought first half we were outstanding - the effort they put in without the ball was exceptional," he said.

"We addressed it half-time that we could have been a little bit better with the ball again, but I won't have a bad word said about that group of players. They have given everything today.

"My message is don't be disappointed. We have got to build for the future again now. Having got to the World Cup is an unbelievable achievement for that group of players."