Business|Bank of England Raises Rates Most Since 1989

In its first meeting since Liz Truss resigned as prime minister, the central bank ramped up its fight against inflation. 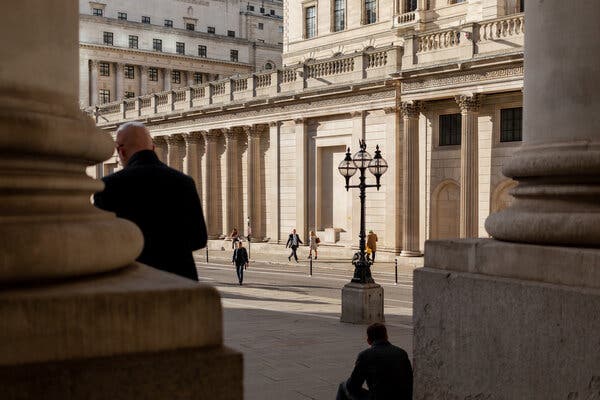 The Bank of England, like many of the world’s central banks, has been raising interest rates in the face of the highest inflation in decades. Credit...Sam Bush for The New York Times

In their first meeting since the short and turbulent premiership of Liz Truss came to an abrupt end two weeks ago, the Bank of England’s policymakers raised interest rates on Thursday by the largest amount since 1989.

The central bank lifted its key policy rate by three-quarters of a point, ramping up its effort to tighten financial conditions and taking the rate to 3 percent, the highest since November 2008. The bank intensified its battle against inflation even as it predicted that the British economy would enter a recession for a “prolonged period.”

Through all the tumult in Britain the past few months, high inflation, as well as the threat of it lingering for longer than expected, has remained a consistent scourge for the central bank. The annual inflation rate topped 10 percent in September, the highest in four decades and five times the central bank’s target.

Bank officials have said they are determined to bring inflation down to its 2 percent target and will use higher interest rates to do so. But they also sent a clear message to financial markets that the bank was unlikely to raise interest rates as high as traders had expected, which was about 5.2 percent when the bank set its forecasts in late October.

The Bank of England expects inflation to climb to about 11 percent this year, which is less than it had previously forecast because of a government plan to freeze household energy bills. While the freeze is holding down the headline inflation rate, it could add to price pressures coming from other goods and services, as households have to spend less on their energy bills, the bank said.

Early next year inflation is expected to be around 10 percent, the bank said, and later drop sharply as the global forces driving up inflation, such as energy costs and supply chain bottlenecks, diminish.

The bank’s latest projections “described a very challenging outlook for the U.K. economy,” policymakers said, according to the minutes of their meeting this week. “It was expected to be in recession for a prolonged period.”