Barney Ronay has filed his report, so I’ll leave you with that. Thanks for your company - goodnight!

I can’t stop thinking about the pace and intensity of that game. It’s so easy to get carried away in the moment but I’m honestly struggling to recall anything comparable, certainly not between two of Europe’s best teams. It was as if both teams had been told a bomb would go off if the match ever dropped below 50 miles an hour.

Bayern dominated all the statistics except the big one. PSG spent most of the game in their own third, but they were devastating on the counter-attack. When I say ‘they’, I really mean Kylian Mbappe: he scored twice, to go with a majestic hat-trick at Barcelona in the previous round, and gave Bayern’s defence the heebie-jeebies throughout.

In many ways Bayern played astonishingly well, particularly in the 32 minutes it took them to come from 2-0 down to equalise, and they’ll still fancy their chances in Paris next week. They won’t fancy another night of chasing Mbappe, mind.

Next Tuesday, same time, don’t be late. That was a quite stunning game of football, played on fast-forward throughout. I don’t know about you but I need a lie down, and I’m neutral.

90 min Rafinha replaces Neymar. There will be two added minutes.

89 min Choupo-Moting is booked for dissent after aggressively appealing for a penalty. A low cross from Muller definitely hit the hand of Herrera, but he slipped and the referee let him off because of that. Moments later, somebody flicks a header over the bar. I DON’T KNOW, OKAY.

88 min Alaba has a shot blocked by Herrera. The rebound goes to Coman, who forces Danilo to concede a corner. That leads to yet another blocked shot from a Bayern player.

87 min Coman’s cross is dummied neatly by Choupo-Moting and reaches Muller near the penalty spot. His shot on the turn hits his standing foot and spins just wide of goal. Navas had it covered and may even have got a touch, though a goalkick was given.

86 min: Just wide from Alaba! Sane’s short cross found Choupo-Moting with his back to goal, eight yards out and surrounded by PSG defenders. He laid it back to Alaba, whose low shot from the edge of the area went this far wide.

85 min A poor clearance goes to Draxler, 25 yards from goal. He pushes the ball forward and smacks a shot miles over the bar.

85 min According to the Uefa site, Bayern have had 25 attempts (including blocked shots) to PSG’s five. And Kylian Mbappe couldn’t care less about such stats.

81 min A relatively quiet couple of minutes, in which the pace of the game dropped to merely breakneck.

78 min “Hi Rob,” says David Hindle. “Is it perhaps apt to point out that the ridiculously young, already World Cup-winning Mbappe is what a €150M forward actually looks like?”

77 min Navas makes another big save from Choupo-Moting, though he was miles offside and the flag went up afterwards.

75 min I don’t know whether this is one of the all-time great Champions League games, because some of the defending has been pretty ropey, but I can’t remember seeing a game - certainly not between two teams of this stature - with such relentless pace and intensity.

73 min Choupo-Moting breaks innto space down the right but picks up the wrong option. Then Bayern appeal unsuccessfully for a penalty when Danilo goes through Davies. We haven’t seen a replay yet beCAUSE THERE’S NO BLOODY TIME.

71 min Angel Di Maria is going to be replaced by Moise Kean. He is feeling his hamstring, though it looks more like a strain than a tear so he might be okay for the second leg.

70 min Choupo-Moting shoots straight at Navas, Kimmich is booked for dissent. I cannot keep up with this.

What a devastating counter-attack from PSG. They covered 50 yards in just two passes, first from Draxler and then from Di Maria towards Mbappe on the left. He was one-on-one with Boateng, who looked terrified as he backpedalled into the area. Mbappe shapes to shoot across goal before dragging a shot that goes through Boateng’s legs and beats the wrongfooted Neuer at the near post. That is a brilliant goal! 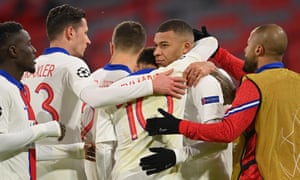 Another twist in this sensational match! 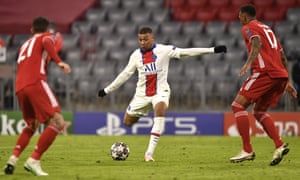 Kylian Mbappe on his way to restoring the lead for PSG. Photograph: Lukas Barth-Tuttas/EPA

66 min There’s a second leg next Tuesday as well.

63 min An overhead kick from Muller goes well wide. The intensity of Bayern’s response to going 2-0 down has been awesome, and PSG simply cannot get out.

It was made by Kimmich, who curled in yet another wicked free-kick from the right. Muller found some space at the edge of the six-yard box - goodness knows how - and flicked a superb header across Navas. 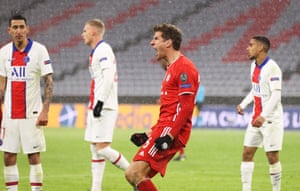 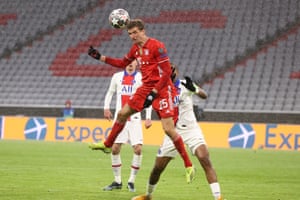 60 min This is frickin sensational stuff.

58 min Kimmich plays a superb return pass to release Sane on the right side of the area. He decides not to shoot and instead slides a low cross that is desperately cleared. The ball eventually comes to Kimmich, 25 yards out, and he floats a chip that is easily saved by Navas. He was so confident, in fact, that he controlled the ball on his chest and then picked it up. PSG break and Neuer denies Mbappe in a one-on-one! The flag went up afterwards, but Neuer didn’t know that at the time.

56 min Sane smashes over from the right side of the area. Bayern are having a shot on goal every minute at the moment.

56 min The next goal in this tie is of monstrous importance. This has been a helluva game.

55 min PSG are under so much pressure. Coman cuts inside from the left and hits a long-range shot that is comfortably saved by Navas. Just before that, Danilo produced a superb defensive header under extreme pressure from Choupo-Moting.

53 min The resulting corner is only half cleared, and when the ball is dumped back into the area Pavard meets it with a low volley. Navas makes another decent save to his left.

53 min: Good save from Navas! Bayern work the ball superbly in a tight area to set up Alaba in the D. He sweeps a shot that is pushed behind by Navas, falling to his left. It was nowhere near the corner from Alaba.

52 min: Big save from Neuer! Mbappe nicked the ball off Sane just outside the area and went straight for goal. He was tackled but the loose ball was stolen by Neymar, who danced clear and lifted a close-range shot that was blocked by Neuer. The ball ran to Di Maria, whose low shot was kicked off the line by Davies! 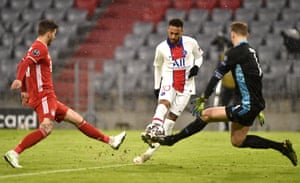 50 min A Bayern corner is cleared to the edge of the area, where Coman mistimes an attempted volley. It’s been all Bayern at the start of the second half.

48 min Coman’s angled cross from the left is this close to the head of Kimmich, who seemed to hang in the air for an age. I’m not entirely sure how PSG cleared it, but they did.

PSG have made a half-time substitution: the young Dutch left-back Mitchel Bakker is on for Abdou Diallo. That’s already the fourth substitution of the game.

“Hi there Rob,” says Francis Lee. “What law of physical chemistry explains how, while the snow is visibly slowing down the ball, the pace of play seem to have reached some new level of hyperacceleration?”

It’s the immutable law of the early goal.

That was 45 minutes of sheer, delightful football. Kylian Mbappe smashed PSG into an early lead, Marquinhos coolly made it 2-0 before going off injured, and then the former PSG player Eric Choupo-Moting got Bayern back into it with an emphatic header.

Bayern dominated possession and created most of the chances, but when PSG managed to break the press they were so menacing. Goodness knows what the final score will be, but I promise you one thing: this won’t finish 0-0.

45 min Two minutes of added time, and Bayern are on the attack. Kimmich’s outswinging corner is headed towards goal by the backpedalling Muller, and Navas dances across his line to make a comfortable save.

44 min The corner leads to a brief game of head tennis until Kimpembe blooters the ball to safety.

44 min Another marvellous free-kick from Kimmich on the right is put behind by Danilo, an excellent piece of defending.

43 min In normal circumstances, with crowds at both games, Bayern would be in all sorts of bother here. But we know that home advantage is minimal at the moment, so they are still right in this tie. They have played brillantly for most of the first half.

38 min Neuer comes out of his area and plays a very dodgy pass that just evades the wrongfooted Di Maria. Had the ball gone to Di Maria he’d have had a relatively easy finish from 40 yards, with Neuer miles out of his goal.

The right-back Pavard flipped a nice cross into the middle, where the unmarked Choupo-Moting thumped a downward header into the corner. That was another very accomplished finish; Navas had no chance. 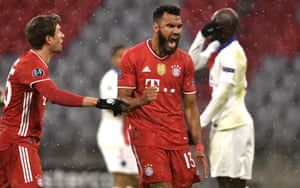 Bayern are back in it! 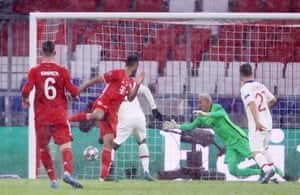 35 min Hernandez is booked for blocking Dagba off the ball.

34 min Replays suggest Hernandez didn’t get the ball when he tackled Neymar a couple of minutes ago. That could have been a penalty, albeit a soft one.

33 min A Bayern substitution: Alphonso Davies is replacing Leon Goretzka. That must be an injury, surely. Davies has gone to left-back, with Hernandez moving to the centre of defence and Alaba into midfield.

32 min Neymar swaggers into the area and is about to shoot when Hernandez makes a vital tackle. This is glorious entertainment!

31 min Danilo has moved to centre-back, with Herrera replacing him in midfield.

30 min That was such an accomplished finish from Marquinhos - but it’s his last contribution tonight. He is leaving the field through injury, with Ander Herrera coming on to replace him. That’s such a big blow for PSG.

A PSG corner was half cleared to Neymar, 40 yards from goal. He curled the ball over the outrushing Bayern defence towards Marquinhos, who controlled the ball immaculately and guided it confidently past Neuer. He timed his run beautifully, and replays confirmed he was well onside. 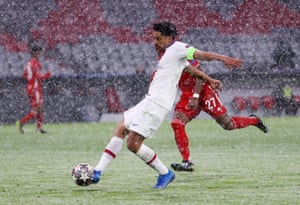