The new efforts include a partnership with Uber and Lyft who have offered to pay for rides to and from vaccinations.

US President Joe Biden on Tuesday announced new efforts aimed at encouraging more Americans to get vaccinated for COVID-19, as he seeks to achieve his goal of reopening the country by July 4.

During a virtual meeting with a bipartisan group of governors, Biden announced the measures which include a partnership with ride-sharing services Uber and Lyft, as well as opening vaccination sites at community colleges, among other efforts.

Biden has set a target of getting 70 percent of US adults inoculated by July 4 so the country can be safely reopened for celebrations and small Independence Day holiday gatherings.

NEW: @lyft and @Uber have agreed they will begin to offer free rides to 80,000 vaccination sites beginning shortly through July 4.

“To ensure that transportation is less of a barrier, from May 24-July 4, Uber and Lyft are both going to offer everyone free rides to and from vaccination sites,” Biden said during the meeting.

“I think that is really stepping up,” he said.

Uber has already been offering free or discounted rides. It announced 10 million such rides in December in addition to the 10 million free rides it announced in March of last year.

Lyft also said it will fund the rides.

“Ride codes will cover $15 each way, which based on previous rides given to vaccination sites, we expect to cover most, if not all, of riders’ fares,” the company said.

According to the Centers for Disease Control and Prevention (CDC), new COVID-19 infections, hospitalisations and deaths have all been decreasing in recent weeks. And according to the latest statistics, 45 percent of Americans have received at least one COVID-19 dose, and 32.8 percent are now fully vaccinated. 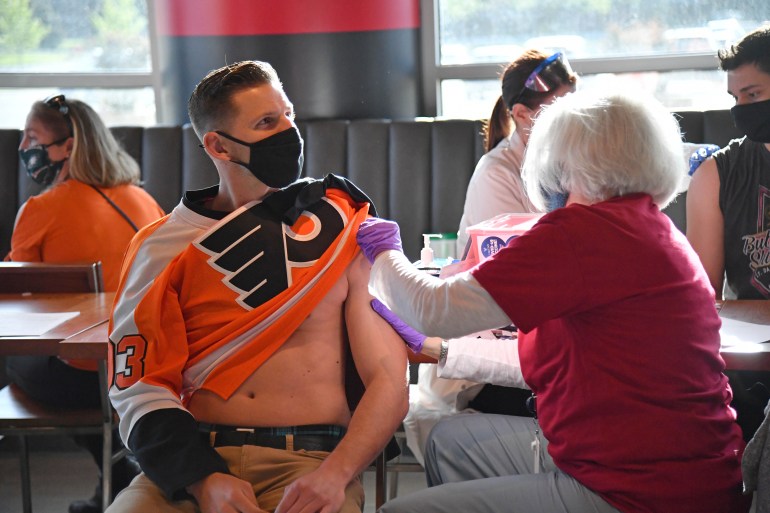 An American football fan getting his COVID-19 vaccine shot before attending a game [Eric Hartline/USA TODAY Sports via Reuters]But demand for vaccines has declined significantly in recent weeks, forcing the administration to figure out new ways to motivate people to get vaccinated.

The current seven-day vaccination rate average according to the CDC is 1.9 million doses a day, down from 3.2 million in mid-April.

“Following a rapid acceleration in vaccination rates, we are now seeing U.S. vaccination progress slow,” the CDC wrote on its website.

“This is not surprising considering the prior focus on vaccinating people at increased risk. Also, people eager to be immunized when they became eligible may have already secured their vaccine in line with increased supply,” according to the site.

Some states are taking their own initiatives to encourage more people to get vaccinated. In New York City, officials announced that vaccinations will be offered in subway stations across the city without appointments. And those who get jabs will be offered free seven-day subway passes.

Free 7-day Metrocard for anyone who gets a shot at subway. Two free one-way tickets if you get your shot at LIRR/MetroNorth. #JabAndRide pic.twitter.com/gtcQwUOR5D

On Tuesday Biden announced funding through the Federal Emergency Management Agency (FEMA) for states for on-the-ground efforts to promote vaccinations, such as through phone banking and door-to-door canvassing.