Big Zuu on breaking the mould for cookery shows 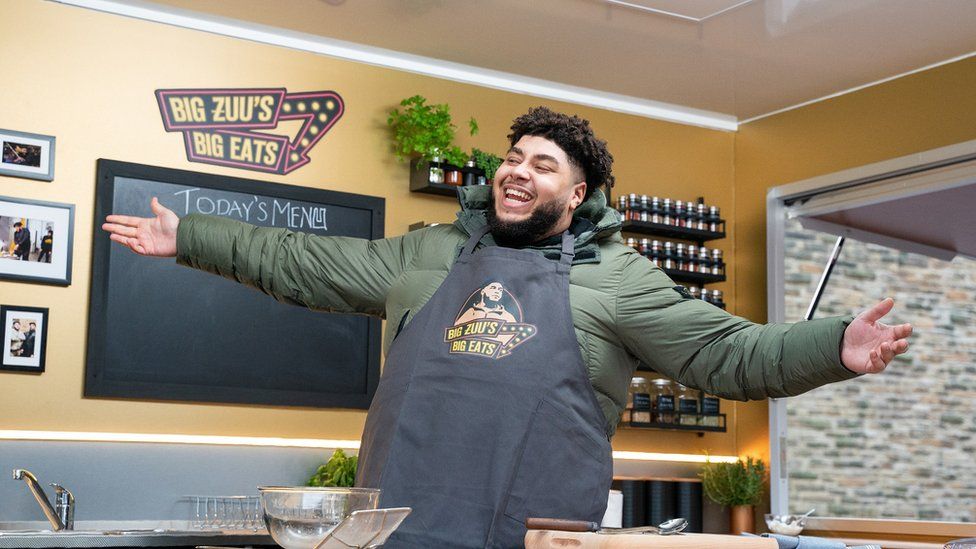 After launching in 2020, Big Zuu's Big Eats is now in its third series

"We did this for working-class people. People that come from nothing, bro."

Or should we say, one of his acceptance speeches. The west Londoner's Dave show, Big Zuu's Big Eats, actually picked up two TV Baftas.

For the uninitiated, Zuu (whose full name is Zuhair Hassan) stars alongside his childhood best friends Tubsey and Hyder as they cook up a storm of diverse dishes for a celebrity guest each week from their caravan kitchen.

Now in its third series, the show has been building momentum since it first aired in 2020. While much of the show's appeal relies on the tempting dishes and comic banter between the trio - and their guinea pig guests - there's clearly a drive to push the envelope, too.

All three of the show's hosts come from refugee backgrounds, something Zuu also referenced in his Bafta speech.

"Our main thing when picking a guest is... about representation and having a fair spread of different people, different voices that we kind of give life to because the food we cook is based on the guests," Big Zuu explains.

"So when we cook food for people from different backgrounds, we tap into different cultures and cuisines."

Enver Solomon, CEO of the Refugee Council, tells the BBC: "Refugees, like the family of Big Zuu, are ordinary people in extraordinary circumstances who simply want the chance to live in peace, away from the war, conflict and violence that shattered their entire lives.

"Refugees have so much to contribute to their new communities, across many spheres of society and it is vitally important they have a voice."

Previous guests on Big Zuu's Big Eats include Jimmy Carr, Mo Gilligan, Judi Love and Harry Redknapp, while the likes of Mel B and Johnny Vegas are sitting down to dinner in series three.

Zuu's also keen that the food featured - which runs the gamut from smoked eel sarnies to Mama Zuu's jollof rice - is accessible and affordable, especially during the current cost of living crisis.

"How many people actually say, 'You know what, I'm gonna go cook what I just saw on Channel 4 or on Saturday Kitchen?" the self-taught cook asks.

"No disrespect to my peers [but] sometimes the recipes and ingredients… are not accessible at home. For our show, it's very important [that you can] make it at home [and can] afford to make it. Even when we do specialist dishes, we like to break the mould and just say: 'If you ain't got this [ingredient], use something else.'"

Zuu, who grew up on a council estate, adds: "I feel like sometimes hearing from our voices is a bit more understandable than hearing it from a… very rich, middle-class person."

Critics agree. Emily Baker of iNews wrote in her review of the show last year: "Unexpected, captivating and a little left-field, the rapper and chef's show is exactly what the future of TV cooking should look like."

But not everybody is a fan of its sometimes frenetic energy. "It's really quite fast-paced, there's a lot going on, it's a little too much for me," said film and TV critic Rhianna Dhillon on the Radio Times Podcast. "I had no idea what was going on in this show, it was such a mess for me, but it's just because it's not my kind of thing - I like to know a structure and I like to stick to it."

Tubsey and Hyder, who Zuu nicknames the Arabian Chuckle Brothers, say it's crucial they are allowed to be authentic - what you see is what you get.

"Me and Tubsey especially, we were just clueless [when the show first started] but they [the producers] just said: 'You guys be yourselves'," Hyder tells me.

Zuu says that's why the Bafta recognition was so important. "People like us don't win it. As much as it was a time for celebration, it was a time to appreciate what we've done. It was important for us to reflect on why we were there and what we represent.

"I felt it was only right for us to use that moment to touch on the struggles that we had to get here and hopefully inspire other people in the process."

'All walks of life'

He says people still come up to him to talk about it.

"I definitely get a lot of people stopping me, talking to me about it, telling me how it affects them, telling me they play the speech every morning to motivate them. I get stopped by all walks of life, by people who are white, black, Asian, from all types of backgrounds, people who are posh, people from the hood. It doesn't matter."

The lads still seem to have their feet on the ground - although Hyder has become a bit of a diva by all accounts.

Zuu jokes: "If Hyder gets to the set and there's no cheese toastie, he doesn't film."

Hyder protests: "I don't say I won't film but you'll just get a lot more out of us if there's a cheese toastie on set!"

Unsurprisingly, their parents are thrilled at their success.

Hyder, whose family comes from Kurdistan and who previously worked in his dad's garage, explains: "They just want us to make something of ourselves. We can then return the help to them for giving us the opportunity... it's just about trying to pay them back."

Zuu says his mum, who came from Sierra Leone when she was four months pregnant, is "eternally happy... she just wants me to buy a house" while Tubsey jokes that he's "getting the pressure to get married now" from his mum.

Before that, they all have more ambitions to fulfil.

Zuu - who is AJ Tracey's cousin - is continuing to make music and wants to pursue more acting work (he's in new sitcom Sneakerhead on Dave), while Hyder is contemplating running for election as an MP one day.

Tubsey, whose family are from Iraq and Iran, wants to get into business, maybe something combined with his love of food.

All three agree that their favourite guest on the show so far is comedian Rosie Jones, who took part in the first series.

And Zuu's ultimate guest choice? For the Liverpool fan, it can only be one man, Jurgen Klopp.