Black Friday off to 'steady start' despite cost of living concerns 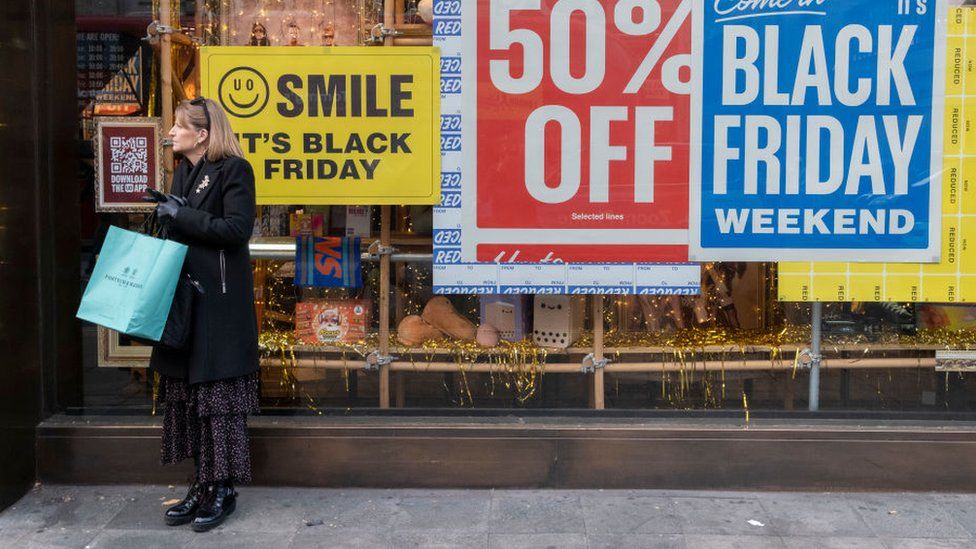 Black Friday sales are "off to a steady start", latest data suggests, despite predictions the higher cost of living would dampen the sales event.

Barclaycard Payments, which processes £1 in every £3 spent using cards in the UK, said transactions so far were similar to the amount made last year.

This is the first festive season without Covid rules for three years, so shop footfall is expected to be up.

Experts had predicted sales and profits would be lower compared to 2021.

They said this would be down to the purse strings of customers being tighter due to consumer prices rising at the fastest rate for 41 years.

However, Marc Pettican, head of Barclaycard Payments, said: "Our data shows that Black Friday is off to a steady start this year, despite the challenging economic backdrop.

"When looking at spending on the morning of Black Friday, so far today, transaction volumes are broadly in line with what we saw this time last year."

Meanwhile, Mark Nalder, director of payment strategy at Nationwide Building Society, said early indications were that this Black Friday "will be the busiest shopping day of the year".

"Despite cost of living pressures, transactions are already up 7% on last year. The lure of a Black Friday bargain ahead of Christmas is clear to see as the number of purchases are currently up 17% on an average Friday."

The promising start for retailers appears to have exceeded predictions from industry analysts, who had forecast a dampened day of trading.

Retail expert Richard Lim told the BBC he was expecting Black Friday to be a more "muted affair", with sales down on last year.

"Inevitably, I think what we're going to see is consumers being much more careful with their spending," he said.

Despite higher footfall, spend will be lower due to "stressed budgets"

Although it is one of the busiest days in the retail calendar, this year Black Friday has to compete with football World Cup matches - including England v USA and Wales v Iran.

Mr Pettican, of Barclaycard Payments, said there had been an increase in transactions in the week leading up to Black Friday compared to last year.

He suggested this could be down to the "feel good factor in the run-up to the World Cup" giving retail and hospitality a boost.

"We're also seeing Black Friday discounts starting earlier each year, so while today remains the main event, many retailers started their deals earlier in the month. It will be interesting to watch what happens as we progress throughout the day, especially as we near England's second group stage match this evening," he added.

He told the BBC's Today programme the types of products people were buying had changed compared to previous years, with a significant rise in demand for energy-efficient goods.

"I think you can draw from that that customers are worried about their finances and more concerned perhaps about their future finances than they were this time last year," he added.

Louise, 40, from Suffolk, said she would not be rushing out for this year's Black Friday sales.

"I use price trackers and can see that some things I want are cheaper in advance, about four to six weeks ahead of the sales, so I do my Christmas shopping around then," she said.

Louise, who has two children, said all of her household bills were going up. Now shopping feels like a luxury, when she feels like she should be saving.

But Faye Thomson told the BBC she had been awake since 5:30am to join a queue of about 100 people outside one department store.

"I saw this one Stella McCartney bag online and I know there's only two in store so I thought I'd get here early," she said.

Black Friday has morphed from its former one-day shopping frenzy of a decade ago, to offers stretched over the week. Consumer group Which? found that many of the discounts found on Black Friday in 2021 could be found at other times of the year too.

Are you a shopper looking for deals on Black Friday? Or a business owner offering discounts? Share your experiences by emailing haveyoursay@bbc.co.uk.