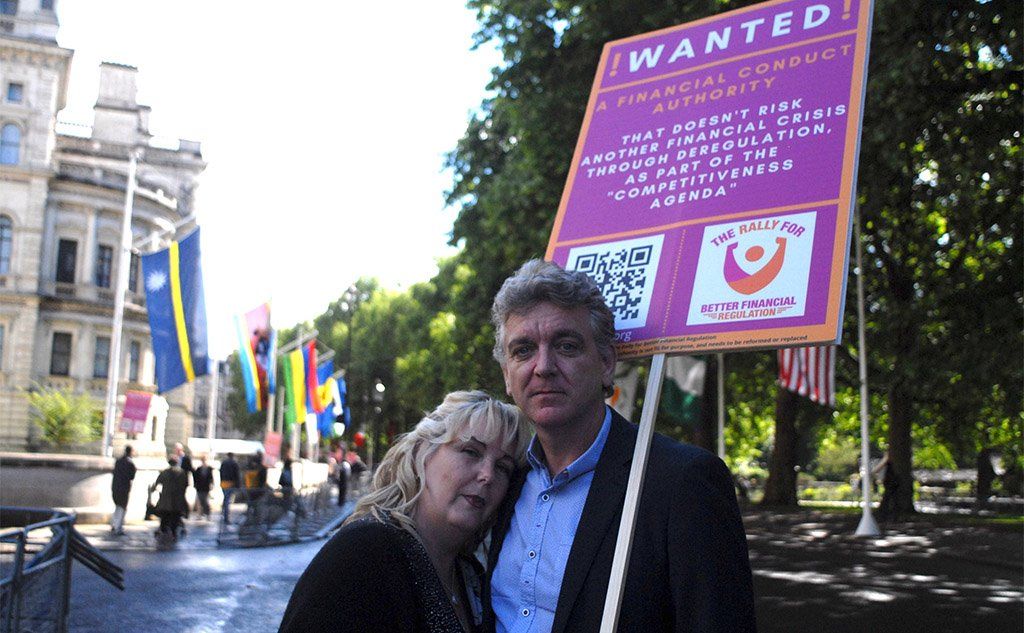 The financial watchdog has been accused of failing to act on warnings about a doomed property investment scheme that saw people lose their life savings.

Some 2,000 people lost £46m when Blackmore Bond collapsed. It was claimed a marketing company had used suspect tactics to sell to ordinary people, not experienced investors.

The Financial Conduct Authority (FCA) did not intervene for two years.

The FCA said it was not its duty to step in but MPs want an inquiry.

The FCA's then chief Andrew Bailey - now head of the Bank of England - declined to comment.

The bond was set up to invest money into UK property developments and the proceeds would supposedly pay back the investors. Blackmore was offering up to 10% per year in interest payments.

The scheme, known as a mini-bond, should by law only be sold to experienced investors, however it was marketed to ordinary people.

The bond collapsed in 2020 amid allegations of suspect sales tactics and inappropriate payments. Direct warnings about the tactics of a company marketing the Blackmore Bond were made to the FCA in 2017 and 2018.

An investigation for BBC Panorama reveals evidence suggesting the FCA could have acted earlier - and may have tried to cover up the fact it did not.

Cross-party MPs, including members of the Treasury Select Committee, have called for an inquiry into the FCA's handling of the Blackmore Bond.

Blackmore victim Paul Stevens, who was forced to retire from work due to an auto-immune disease called myasthenia gravis, invested his ill-health retirement benefit into the fund.

He has been left devastated by the loss and says it has made his illness worse.

"Like many others, we invested a significant amount of money and, as a family, we lost £40,000," he said. "These schemes must stop and the FCA needs to police them."

His wife, Jane, said: "We feel as if we've been turned over twice - first by Blackmore, then by the FCA."

Each year, an estimated billion pounds is lost in failed investment schemes. Panorama tells the story of one of them as its member challenge the regulators they believe failed them

Paul Carlier, a finance and banking expert, first reported his concerns about the marketing of the Blackmore Bond to the FCA in 2017.

His office at the time was next door to the company that was tasked with selling the bond. He overheard their activities and reported them for using high-pressure "boiler room" sales tactics, which are banned.

"[The sales people] were literally cold-calling people and approaching people with an intent to sell them a toxic or worthless investment product, including the Blackmore Bond," he told BBC Panorama.

Mr Carlier said the office walls were so thin he could hear their pushy techniques, as well as them clapping and high-fiving when they managed to make someone commit to investing.

In 2018, he learned that the sales company was still in operation and warned the FCA again, this time escalating the warning to the regulator's then chief executive, Mr Bailey.

"And yet another £10m-plus was invested after he was aware of it, through from the remainder of 2018 and into 2019," said Mr Carlier. "It's astonishing. I don't know what more you could have done. I entrusted them to deal with it, and they didn't."

Mr Bailey now has a pivotal position managing the national economy, as head of the Bank of England.

In total, £30m was invested into the Blackmore fund after the first warning in 2017.

When Mr Carlier again complained to the FCA about its lack of action, the regulator sent a draft response to him - he believes by mistake - which contained a sentence apparently admitting the FCA was at fault. The line said: "However, I consider there was a missed opportunity to reconsider and act on the intelligence you provided."

But this line had been crossed through, implying that Mr Carlier wasn't supposed to see it. He was only able to because someone had left the track-changes feature on, which showed a history of all edits to the documents.

"Somebody has sought to conceal that," he told the BBC. "That is the definition of a cover-up."

The FCA has denied that it attempted to cover up its actions and said the letter to Mr Carlier was changed because "further evidence came to light".

MP Kevin Hollinrake, who sits on the Treasury Sub-Committee on Financial Services Regulations, is among those calling for fundamental reform of the regulator: "I'd like to say this is a one-off case, but the reality is we see the succession of cases like this where the FCA has failed and it has failed here again."

He also criticised Mr Bailey and the FCA for its handling of other failed investment funds, such as London Capital and Finance, which collapsed in 2019, leading to 11,600 investors losing £237m.

That failure led to an inquiry by former Court of Appeal Judge, Dame Elizabeth Gloster, and compensation for the victims. The MPs believe the same should happen in the case of Blackmore.

Mr Stevens and other Blackmore Bond investors outlined how the fund's collapse had impacted them in front of MPs and members of the House of Lords at a special meeting in June.

Liberal Democrat peer Baroness Susan Kramer said an inquiry was needed "to deliver some justice for the people who, essentially, were scammed in an entirely public and, what should have been, regulated setting".

The BBC Panorama film also follows other Blackmore investors who, believing they had been abandoned by the authorities, set out to uncover evidence relating to Blackmore Bond themselves.

The FCA and other authorities have not taken any action against the Blackmore directors, Phillip Nunn and Patrick McCreesh.

The FCA has denied it was responsible for the Blackmore investors' losses. It said it was examining the way the bond's promotional material was approved, but said investors were warned of the risks and had to confirm they understood them and could afford to lose the money.

Andrew Bailey declined to comment to Panorama on his performance at the FCA.

Andrew Bailey, now governor of the Bank of England, headed the FCA between 2016 and 2020

Phillip Nunn, who has been bankrupted in connection with one Blackmore Bond development, did not reply to any of Panorama's questions, despite repeated requests.

Patrick McCreesh denied any wrongdoing and said the Blackmore Bond was a potentially profitable, properly run business. He said the risks of investing were fully explained, vulnerable people were not targeted and Blackmore had stopped working with the sales company which had been reported to the FCA.

Mr McCreesh also admitted some business decisions were not right and apologised. He said he has suffered hardship and insists, as a director, he always acted properly and in the best interests of the business.