'Boccia has given me great opportunities' - Smith 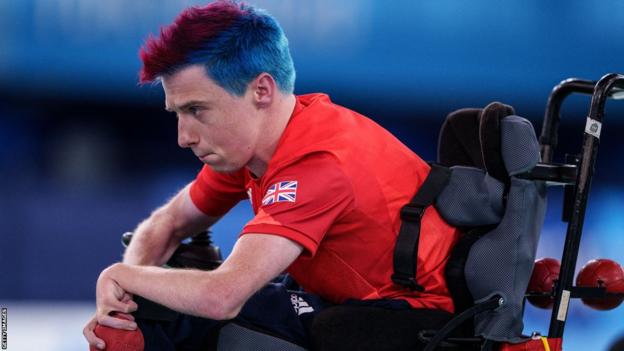 Boccia is a Paralympic sport which combines skill, precision and tactical nous. Britain's David Smith is one of its leading exponents.

The winner of five Paralympic medals, including three golds , he is the current European, world and Paralympic BC1 individual champion.

For 3 December - the International Day of People with Disabilities - and before the World Championships which begin in Rio de Janeiro, Brazil on 5 December, Smith tells BBC Sport about the importance of boccia and why social contact is key for everyone.

Boccia has given me great opportunities - but I don't want to be just known as the guy who throws balls for a living. There is more to me than that.

I started playing the sport when I was six, but I was useless and didn't enjoy it. At that point, sport wasn't really an option for me as I was considered too physically disabled for a lot of things.

I have cerebral palsy spastic quadriplegia. While cerebral palsy itself is common, the form I have is more severe than most and affects my whole body. I'm unable to walk and since I was three years old I have used an electric wheelchair to get around.

Once I'm in my chair I'm pretty independent, but I also have a live-in carer who does my day-to-day care so that means I can get on with life as well as I can.

But it was going to secondary school at Treloar's in Hampshire, which was a cross between Hogwarts and St Trinians for disabled children, which opened lots of avenues for me.

The aim of boccia is to get your balls closer to the white target ball, the jack, than your opponent can.

It was just one of the sports I played at school and being surrounded by people who were better than me encouraged me to get my head down and work harder, and as I got better it got more interesting because the competition got tougher.

When I was in year nine I went to the British Championships and won it, beating most of the British team who were preparing for the Athens Paralympics later that year. But it was only when I won the World Championships in 2007 that I realised I was a good player and I needed to take it more seriously.

The Beijing Paralympics came around the following year and I won team gold. It has gone on from there. 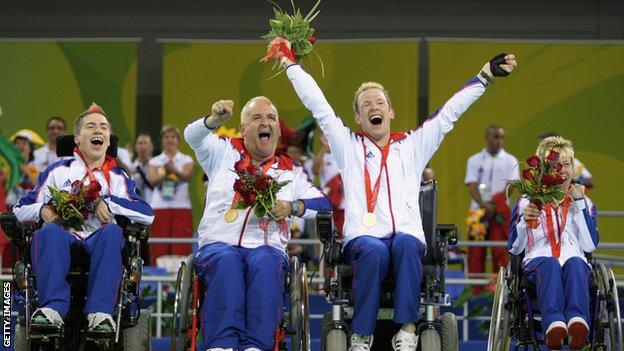 Boccia gives me and my team-mates an opportunity to compete in sport at a high level, which is very important because with the level of our impairments, it would be almost impossible for us to find another sport that would allow us to compete at a Paralympics

There is powerchair football, but that isn't in the Paralympic programme yet, and although I could maybe classify to compete as a swimmer, I swim like a brick so that isn't going to happen!

In Britain today, we know that everyone - whether disabled or non-disabled - is facing a variety of challenges.

There is no denying that costs are going up for everyone and it makes things more difficult for people to spend money on hobbies. Then there are additional challenges for disabled people around things like travel, accommodation, medical equipment and social care.

With everything going on in the world and so much doom and gloom and negativity, I don't think people are being encouraged to get out of their house to try new stuff or do any kind of social activity.

We should be encouraging everyone, regardless of disability, to get out and meet new people, explore what they are good at and become active members of society.

Maybe it is time to not just think about what government and society can do for you but also what can you do for society?

I've started a community boccia club in Swansea, where I live, and that is focused around people coming in, throwing some balls, having a chat and a laugh with others - just basic social interaction.

If you don't feel like you are able to do something and aren't encouraged, that can be quite damaging.

I'm very stubborn, so if someone tells me I can't do something I will probably do it. I love proving a point and being underestimated because it means I can slip under the radar and catch people by surprise. 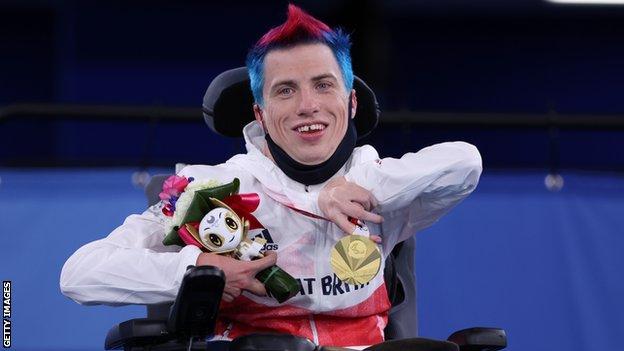 Smith retained his BC1 individual title at the Tokyo Paralympics

But while I know that not everyone has that same determination, I don't think we are always willing to have a difficult conversation with ourselves, to look in the mirror and say 'Do I know what I want to achieve and am I doing everything I can to achieve it?'

Looking to the future

While social issues are a factor for the next generation of boccia players coming through, there really has never been a better time to start in the sport. We just need more people to come through the door and start playing.

Now there is greater recognition for the sport, better funding thanks to UK Sport and live television coverage for some of our events - things that wouldn't have happened 20 years ago.

When I went to my first European Championships in Porto in 2005, I was a self-funded athlete and had to raise the £2,500 needed for me and my sports assistant, who helps me on court, to go and compete.

Sport has given me a lot - not just the medals and honours, but the platform to move away from home, to go to university in Swansea and get a degree in aerospace engineering, chances to travel the world as an electric wheelchair user and latterly to build my own career as a nutrition coach. 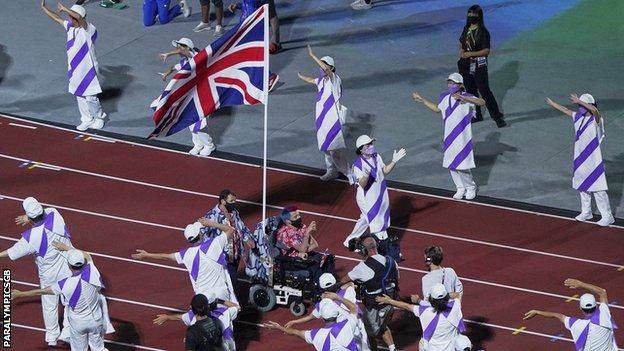 Smith was the GB flagbearer at the Tokyo Paralympics closing ceremony

The future of boccia will be whatever people make of it. It is everyone's responsibility and if I retire with the sport in a better place, then I know I have done something right.

But it's not just medals - it is inspiring the next generation.

At the moment, there isn't another domestic rival for me in my BC1 category and I don't know where the next challenger is coming from. So, leaving the sport in a better place would mean that there are other Britons queuing up to challenge me.

Overall, I think I've done alright in my life, but there is more to come. I'm ready to defend my world title in Rio and then focus on Paris 2024. I want to compete in Los Angeles in 2028 and also Brisbane in 2032.

I'm not satisfied and I won't be until it's done. It's not done yet, so for me I need to keep pushing forward and keep finding new things to be good at.