“Eric can’t honestly want you to be with me,” says Carter to Quinn, who reminds him that the reason her husband is doing this is because he believes he can no longer fulfill her needs. (Apparently, Eric — and the show’s writers — think there’s only one way to have a fulfilling sexual relationship. I have some books they might want to borrow… ) They inch closer until Wyatt enters. Quinn’s son asks if he interrupted something, and they insist otherwise. But he points out that when he walked into the office, they jumped away from one another.

Quinn tells her son that she loves her husband, and that she and Eric are doing everything in their power to forge a stronger relationship. Wyatt points out that the way Eric took her back was “miraculous” after everything she did. “That is a very special kind of love,” he says. Carter points out that that’s simply how Eric is… his first thought is always of others. Having all agreed that Eric is a remarkable man, Wyatt tells his mom to do whatever Eric asks. (Wyatt, you have no idea what you’re suggesting your mom do… although maybe if you looked at the way she and Carter are eyeing one another, you’d clue in… ) 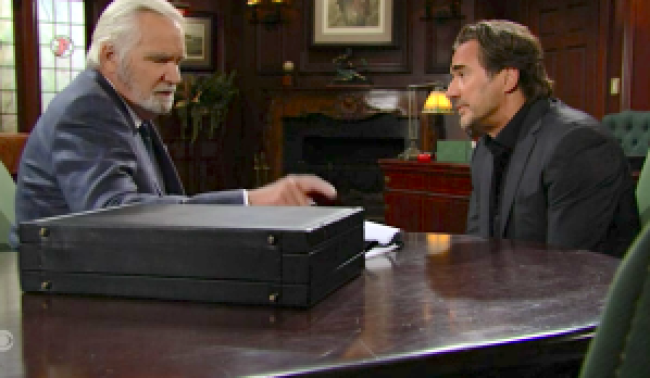 In Eric’s office, Ridge begs his father to open up to him. Eric, wisely, says, “This is a place of business” and refuses to discuss his personal life. “I think it’s been discussed quite enough in this office,” Eric insists. Of course, that doesn’t stop his son from continuing to push the issue. “This reunion with Quinn, it wasn’t all candlelight and fireworks,” suggests Ridge. “Was it?” Eric continues to deflect and Ridge continues pushing for answers, making it clear he doesn’t give a flying… fig about Quinn, he’s only concerned with his dad’s happiness.

Brooke enters, having the audacity to want to talk about work in general and the new samples which arrived in particular. Quickly sensing there’s a far more interesting conversation going on between the men, she tries getting Eric to open up. He declares their constant badgering annoying, but Brooke responds, “Why would you want us to let it go?” Eventually, Eric says that he and Quinn have been “more open to one another” than they’ve ever been in their lives. “Honesty is good,” agrees Ridge. “You know what else is good? Trust.” Ridge says that when he and Brooke found their way back together after their many challenges, “it was magical. It was amazing. We didn’t leave the house for days. We didn’t leave the bedroom. And there were things happening… ” he stops himself, apparently realizing he’s entered TMI territory. Brooke asks if perhaps what’s going on is that the love and compassion in Eric’s marriage is gone. “It’s pretty easy to judge, from the outside looking in, isn’t it?” suggests Eric. Brooke insists they aren’t judging, but Eric, clearly having a better understanding of the word than she does, shouts that they totally are.

Brooke suggests that admitting he made a mistake might be seen as a failure, but it’s not. “It’s not worth sacrificing your own well being just to honor a commitment,” she says. “What goes on in my marriage is my business, it’s not yours,” states a clearly over it Eric, telling his son and daughter-in-law that he wants this to be the end of the conversation. (Dude, have you seen this show?)

After Eric leaves, Brooke and Ridge continue to bash Quinn (both having apparently forgotten that time when Ridge wound up kissing his mother-in-law after seeing her softer side). “I just don’t get it,” admits Brooke, listing Eric’s positive attributes and Quinn’s total lack of them. “Your father is an amazing man,” she sighs. “His ability to love is extraordinary. It’s fearless and boundless. Quinn doesn’t deserve him.” 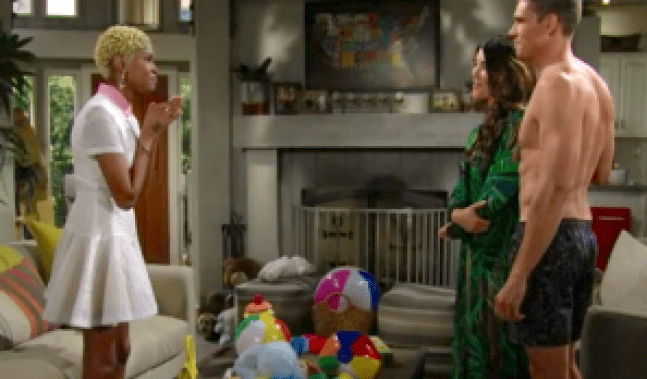 More: Which B&B star is truly the lucky one?

At the beach house, a shirtless Finn catches his wife off guard and they begin making out. After reminiscing about just how much fun the day has been — including Liam and Finn’s “dad-joke competition” — Steffy admits that she’s never been happier, and it’s because of her hunky husband. They smooch… just as Paris enters. “We have company!” shouts Steffy, pushing Finn away with a laugh. Paris apologizes for interrupting, saying she’ll go up to her room. (Again, why isn’t she staying in the guest house, especially now that Finn and Steffy have reunited?)

The topic soon turns to Sheila, prompting Steffy to ask that if Paris sees or hears anything, she immediately tell them. “It’s really important that she stay out of our lives, for good this time,” says Finn’s wife. 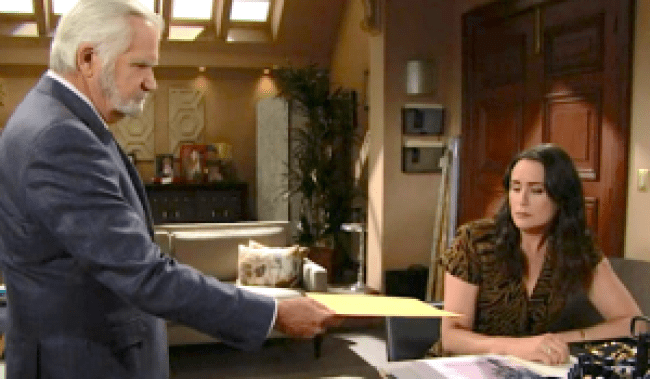 In the design office, Eric finds a distracted Quinn fiddling with a piece of jewelry. They wind up talking about their wedding day, and how the rest of the family refused to even show up. “They had no idea how far I would go to give you want you want,” he reflects. “I promised that I would give you happiness and joy and fulfillment in your life. I can still do that,” he says, handing her an envelope with “sensitive material” for Carter. Quinn says the lawyer went home from the day, but Eric is fully aware of that. “Take it to him,” he says meaningfully. “I’ll see you at home.” More: Which characerst have been married most often?

Later, as Eric drinks alone and looks at Quinn’s portrait, Carter is at his apartment, flashing back to Eric saying that while his sex life is over, Quinn’s doesn’t have to be. Carter then remembers kissing Quinn, making love to her and the moment they declared their love to one another. There’s a knock at the door, and if you need to be told who is standing on the other side when he opens it, you haven’t been paying attention…

Next on The Bold and the Beautiful: Wait until you see what’s on Paris’ mind! from Eric.

Given that Sheila’s been making trouble for years, it only stands to reason that sooner or later, someone’s gonna make her pay… or at least try. Why? Well, we’ve rounded up a few suspects…

Please note that if you purchase something by clicking on a link within this story, we may receive a small commission of the sale.

Miss today’s episode? Catch up via Paramount Plus. 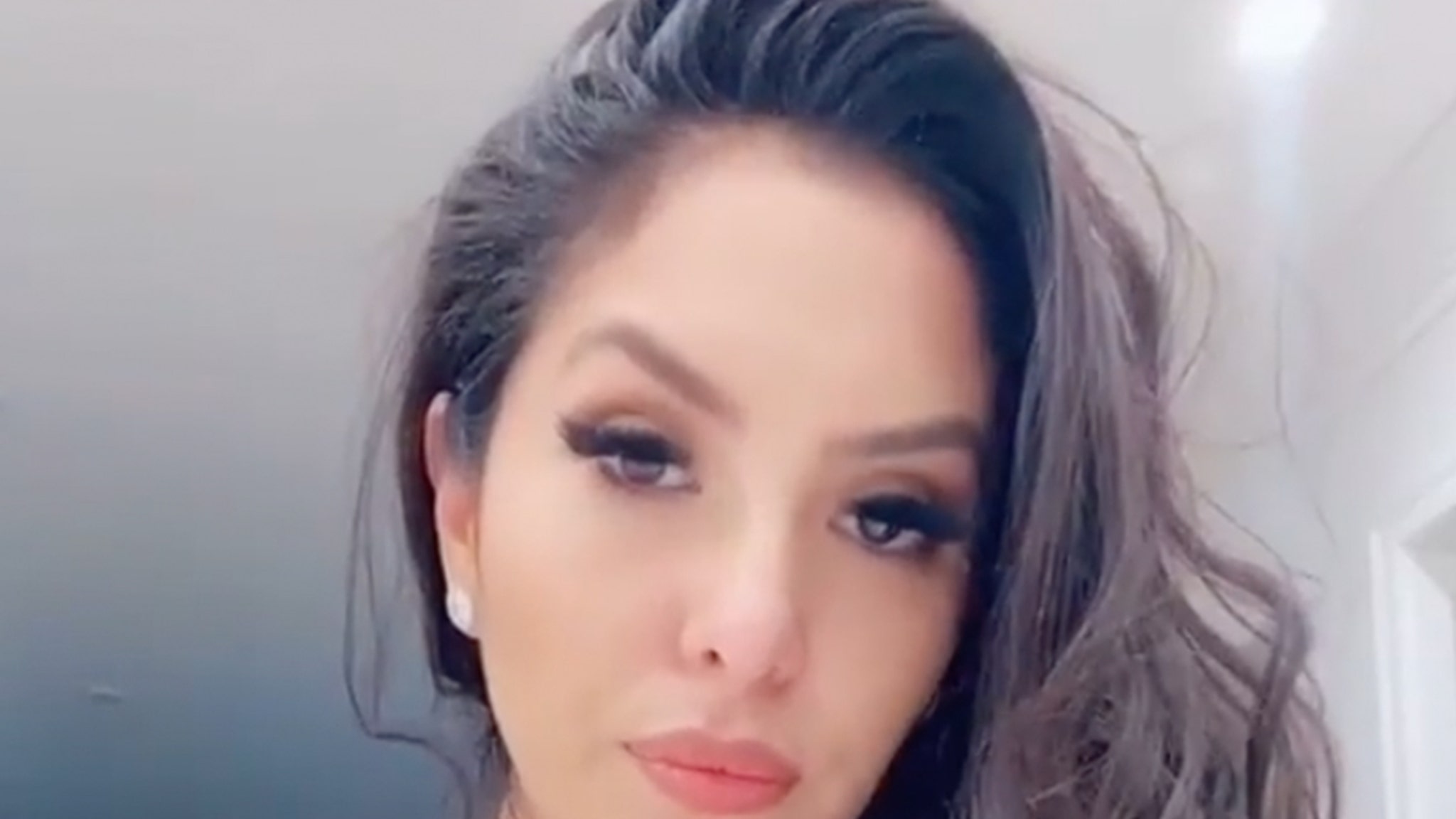