Jackie Chan doesn't appear in Bullet Train, the wild new action film starring Brad Pitt and helmed by maestro of mayhem, David Leitch. But both the director and his star consider the Hong Kong action hero to be the creative lodestar behind the turbocharged blockbuster, which takes place on an assassin-filled bullet train speeding from Tokyo to Kyoto. "We had a lot of talks about Jackie Chan and how much we admire what he's doing," Pitt tells Yahoo Entertainment. "I still think he's our Buster Keaton — he's underrated." (Watch our video interview above.)

Pitt and Leitch specifically sought to recreate the way that classic Chan pictures like Drunken Master and Police Story bring the funny to all the kick-ass fighting. That's an approach that the stuntman-turned-director has tried to replicate not only in Bullet Train, but also his past films including Atomic Blonde, Deadpool 2 and Hobbs & Shaw. "The way he infuses comedy into fights is really special," says Pitt, who first met Leitch in the late '90s when the future filmmaker served as his Fight Club stunt double. "To do something in that direction under Leitch and Leitch's gang was great fun. I've never gotten to do that before." 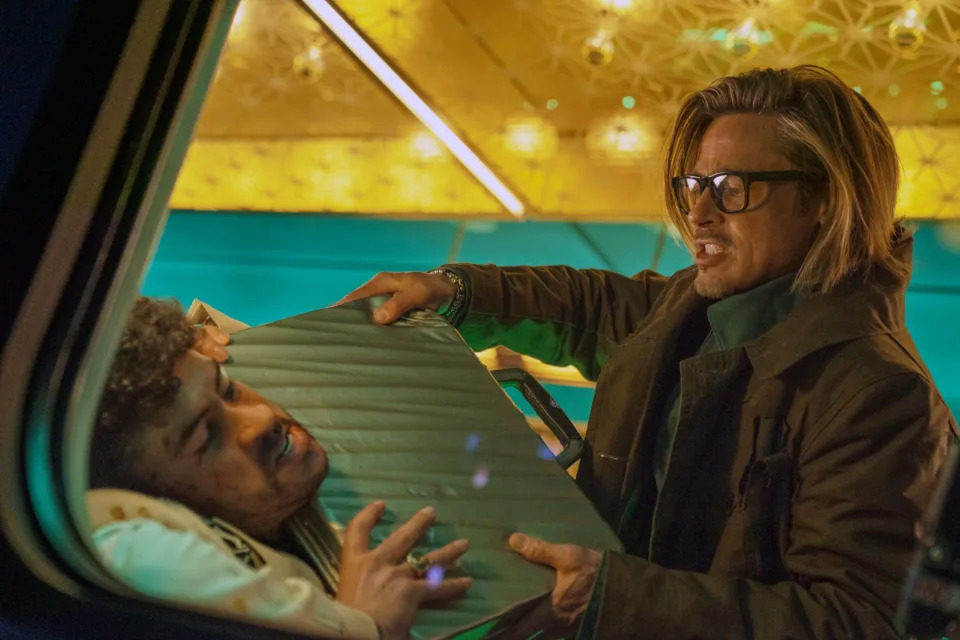 The rest of the Bullet Train cast had a blast mixing laughs and fisticuffs as well. Asked to recall the craziest stunt he participated in, co-star Aaron Taylor-Johnson points to a bonkers moment where he and Pitt are launched out of one of the train's open doors. "We were on a couple different rigs with different harnesses, and we literally get yanked out and pulled back, and we had to pull our way back in," the actor says. "It's exciting when you get encouraged by the director to be able to do your own stunts."

Bryan Tyree Henry, meanwhile, says he particularly relished a moment where he double-kicked another killer in the chest. "I was like 'This legitimately looks amazing,'" the Atlanta star remembers. "There's also a crazy face-punch thing that me and Brad got to do — that was really fun." And Japanese martial arts superstar Hiroyuki Sanada also had a blast working with Pitt. "When I first met Brad, he was so friendly and easy to communicate with. His atmosphere is always fun and peaceful — that helped me a lot."

Speaking of lending a helping hand, Sandra Bullock did her longtime pal Pitt a solid by filming a small cameo in Bullet Train after he appeared in her comedy hit The Lost City earlier this year. "From here on out, I'm only doing Sandy Bullock movies," the actor jokes. "It's contractual." Sounds like the perfect time to greenlight that next Ocean's movie...

— Video produced by Olivia Schneider and edited by Jimmie Rhee