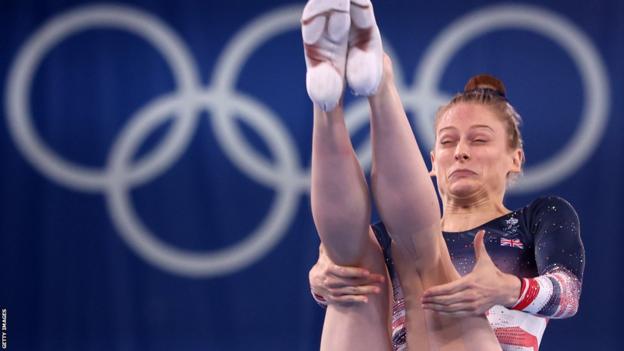 Great Britain finished the Trampoline World Championships in Bulgaria on a high with all-around team gold.

But they emerged victorious on a tie-break.

It was a second medal of the day for Page, who also won silver in the women's individual trampoline event.

The 31-year-old defending champion was the first competitor to go in the eight-woman final and scored 55.950 points.

Although Japan's Hikaru Mori, the next competitor, took the lead with 56.230, the two-time Olympic medallist was able to stay in silver.

In the team event, which included the top five nations, one gymnast competed a routine in each discipline, receiving points from one to five depending on where they finished.

The GB team was second after two of the three rounds, but Perzamanos and Northover scored four points in the men's synchro before Page and Songhurst added five points.

With the scoring tied on points, it came down to the individual scores of all routines combined, with GB coming out on top.

"It's nothing I've ever experienced before," said Way. "For a lot of us on the team it's our first time in an all-around team final but to come together is an opportunity we rarely get. What a time to get a gold!"