Prosecutor says police this week arrested three men of Moldovan origin and a man and woman of Syrian Kurdish descent this week.

“Five people have been charged. The charges are in two groups: for supporting terrorist acts in another country, namely the attack in Istanbul, and for human trafficking,” Geshev said, adding they were mainly involved in human trafficking through Turkey and smuggling.

A Bulgarian court ruled in a closed hearing later on Saturday that the four men could be kept in pre-trial detention on the human trafficking charges, saying it lacked enough evidence to keep them behind bars on the charges of supporting terrorist activities. 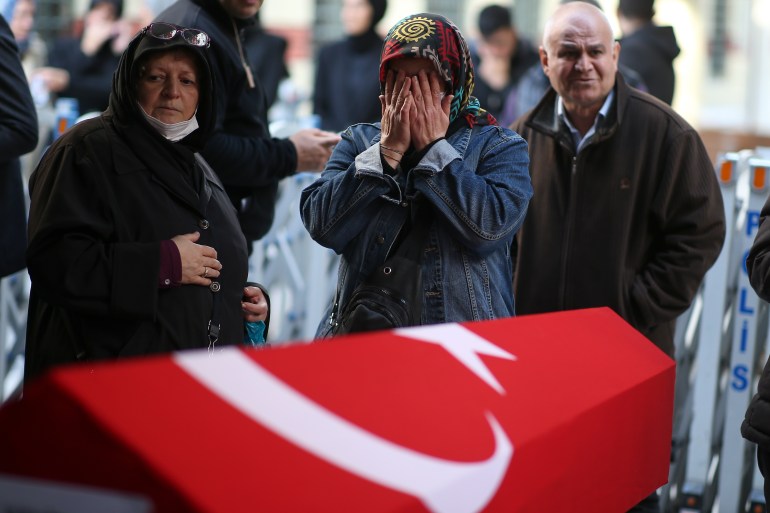 Relatives and friends of Arzu Ozsoy and her 15-year-old daughter Yagmur Ucar, who died in the attack on Istanbul’s Istiklal Avenue, attend their funeral [File: Emrah Gurel/AP Photo]

The prosecutors did not ask the court to keep the woman in custody because of a health condition.

In Chisinau, the Moldovan foreign ministry confirmed three citizens had been arrested.

“Our country strongly condemns any terrorist acts, including those in Istanbul,” said ministry spokesperson Daniel Voda.

Turkish prosecutors have already asked for some of the suspected accomplices in the blast to be extradited, Geshev added.

On Friday, a Turkish court ordered 17 suspects jailed pending trial, accusing them of attempts against the unity of the state, deliberate killings and attempts to kill. Among them was the suspected bomber, who police identified as Syrian national Ahlam Albashir.

No group has claimed responsibility for the blast, which also injured more than 80 people on Istiklal Avenue, a busy and historic pedestrian strip.

Turkish authorities blamed the attack on the outlawed Kurdistan Workers’ Party, or PKK, as well as Syrian Kurdish groups affiliated with it. The Kurdish groups have denied involvement.

The attack was the deadliest in five years and evoked bitter memories from a wave of nationwide bombings between 2015 and 2017 that were blamed mostly on Kurdish and ISIL (ISIS) armed fighters.