Cameroon beat Brazil but knocked out of World Cup 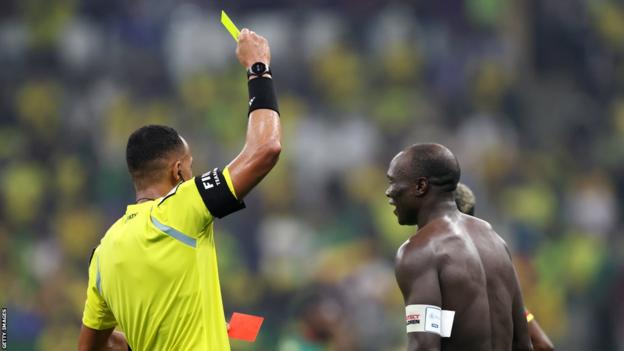 Vincent Aboubakar became only the third African player to score against Brazil at the World Cup finals, after Didier Drogba in 2010 and Joel Matip in 2014, but was then shown a second yellow card followed by a red.

Cameroon defeated a Brazil side resting a host of regulars but still saw their World Cup campaign ended after an entertaining encounter at Lusail Stadium.

Vincent Aboubakar header the winner in stoppage time but his joy immediately turned to disappointment as he was given a second yellow card for taking his shirt off.

Cameroon had acquitted themselves well throughout as Bryan Mbuemo brought an outstanding save from Manchester City's Ederson, deputising for Liverpool keeper Alisson, but Switzerland's victory over Serbia ended the African team's chances of reaching the last 16.

With his side having already qualified after their first two games, Brazil coach Tite made 10 changes and Arsenal's Gabriel Martinelli took the chance to impress with a fine performance in which he was thwarted on several occasions by Cameroon keeper Devis Epassy.

The pre-tournament favourites finished top of Group G despite the loss and now meet South Korea in the knockout phase after their dramatic late win against Portugal saw them edge out Uruguay, who beat Ghana, on goals scored.

Brazil were in the comfort zone after winning their group games against Serbia and Switzerland, affording coach Tite the opportunity to shuffle his powerful squad while demonstrating the range of resources at his disposal.

They may have lost this game, but with qualification assured Tite may not be too disappointed at the defeat as it did not inflict any damage on their group standing, and he now has fresh legs for when the knockout stage starts.

Arsenal's 21-year-old Martinelli was Brazil's outstanding performer, with Cameroon keeper Epassy producing fine stops from an early header, and a shot destined for the top corner in the second half.

Martinelli's tireless running combined with quality proved a thorn in Cameroon's side and made an eloquent case for his inclusion should Tite wish to make changes as the World Cup progresses.

Brazil have shown enough in their two victories to justify the pre-tournament optimism surrounding their chances - now they will hope Neymar, who acclaimed the fans with his team-mates on the pitch after the final whistle, can recover from the ankle injury sustained against Serbia in time to make his expected contribution.

Attempt missed. Gabriel Martinelli (Brazil) header from very close range is close, but misses to the right. Assisted by Marquinhos with a headed pass.

Attempt saved. Bruno Guimarães (Brazil) header from the centre of the box is saved in the top left corner. Assisted by Marquinhos with a cross.

Attempt missed. Pedro (Brazil) header from the centre of the box is close, but misses to the right. Assisted by Gabriel Martinelli with a cross.

Goal! Cameroon 1, Brazil 0. Vincent Aboubakar (Cameroon) header from the centre of the box to the bottom right corner. Assisted by Jerome Ngom Mbekeli with a cross.

Attempt missed. Pedro (Brazil) left footed shot from the centre of the box is high and wide to the left. Assisted by Raphinha.

Bruno Guimarães (Brazil) is shown the yellow card for a bad foul.

Moumi Ngamaleu (Cameroon) wins a free kick in the defensive half.

Attempt blocked. Bruno Guimarães (Brazil) right footed shot from the right side of the six yard box is blocked. Assisted by Raphinha with a cross.

Vincent Aboubakar (Cameroon) is shown the yellow card for a bad foul.

Attempt missed. Christopher Wooh (Cameroon) right footed shot from the centre of the box is high and wide to the right. Assisted by Karl Toko-Ekambi with a cross following a corner.