Can Trump Squeeze More From His White Base in Pennsylvania and Beyond?

With President Trump trailing Joseph R. Biden Jr. in Pennsylvania in nearly every poll, his last refuge and perhaps best hope is to maximize the turnout of working-class white voters. 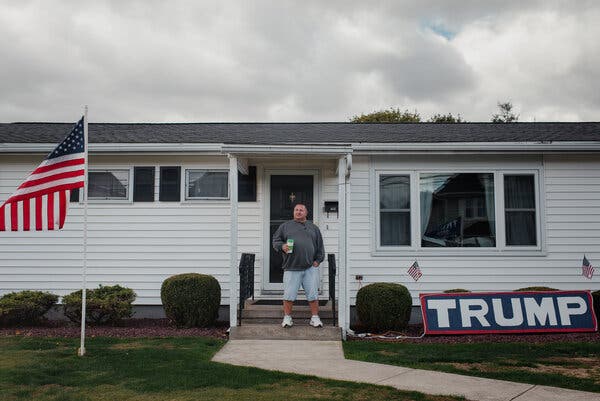 Dave Mitchko, who used to work at the local compact-disc factory, voted twice for Barack Obama before supporting President Trump in 2016.Credit...Hannah Yoon for The New York Times

OLYPHANT, Pa. — President Trump’s narrowing path to victory in Pennsylvania, and the country, runs through small towns like Olyphant, where Dave Mitchko’s street might be quieter if not for the large sign he put on his front lawn urging supporters of the president to honk when they pass.

Trump signs are Mr. Mitchko’s thing, and his front yard has become something of an informal sign depot for Republicans in greater northeastern Pennsylvania. He estimates that he’s given away more than 26,000 signs this year. And his efforts were rewarded by the campaign with tarmac invitations for recent visits to the region by both Mr. Trump and Vice President Mike Pence, as well as a spot driving in the presidential motorcade. Mr. Mitchko wore a suit and a Trumpian red tie for the occasion.

“Your area — this has always been a Democrat area, and yet the votes for Trump here are through the roof,” Mr. Trump bragged that August day.

Mr. Trump was right. Mr. Mitchko was among the defectors. A 53-year-old lifelong Democrat who used to work at the local compact-disc factory, which has since shuttered, and who had a lawn-care business until health troubles put him on disability, he voted twice for Barack Obama. For 2020, he registered as a Republican for the first time.

With Mr. Trump trailing Joseph R. Biden Jr. in Pennsylvania in nearly every poll — a New York Times/Siena College survey last week showed Mr. Trump behind by seven percentage points — voter registration trends have stood out as a rare bright spot for Republicans in one of the nation’s most important battleground states. Since Election Day 2016, Republicans have shrunk the Democratic advantage in Pennsylvania by nearly 200,000 voters, from just over 916,000 to just over 717,000 — all in a state that Mr. Trump won in 2016 by fewer than 45,000 votes.

Many of those gains have been made in smaller, more rural and mostly white counties. The great unknown is how much of that movement consists of ancestral Democrats like Mr. Mitchko who voted for Mr. Trump in 2016, formalizing their departure from the party, and how much is fresh erosion.

Olyphant was once “solid blue,” Mr. Mitchko said. “But it’s definitely cracked now.” Across the street, his neighbor, who said he had recently switched to become a Republican, was packing his truck for a cornhole tournament and bringing along his four-by-eight-foot Trump sign.

As Mr. Trump’s disregard for science and health guidelines during the pandemic has increasingly repelled college-educated white voters, the president’s last refuge and perhaps best hope is to maximize the turnout of working-class white voters, including former Democrats like Mr. Mitchko, whose regular Facebook postings showcase his full embrace of the culture wars of the Trump era.

On the wall of the garage where he stores the Trump signs, Mr. Mitchko has affixed the hate mail he has received (“Dear American turncoat,” reads one piece). And on a recent Saturday, his newly purchased assault rifle was prominently displayed, too, along with the Glock pistol he said he carried with him for protection.

“I’m not worried about nobody. They better be worried,” Mr. Mitchko said. Who exactly are “they”? “From what they say on TV, the Black Lives Matter people, rioters, the looters.” 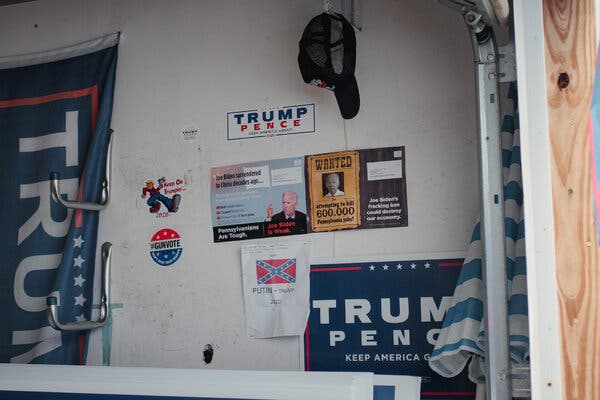 Mr. Mitchko has affixed to the wall of his garage the hate mail he has received for supporting Mr. Trump.Credit...Hannah Yoon for The New York Times

What makes Pennsylvania, and its trove of 20 Electoral College votes, particularly alluring to the Trump campaign is just how many registered white voters there are who are not college educated and who did not cast ballots in 2016 but could do so this year.

That number is about 2.4 million, according to Dave Wasserman, an elections analyst at the nonpartisan Cook Political Report who studies demographic data. Comparatively, he estimated that only about 500,000 college-educated white voters in Pennsylvania failed to cast ballots in 2016.

“The potential for Trump to crank up the intensity of turnout among non-college whites is quite high,” Mr. Wasserman said. According to his model, that demographic broke two to one for Mr. Trump in 2016: two million backed Mr. Trump and one million voted for Hillary Clinton.

Now, Mr. Wasserman said, “There is a level of cultural attachment to Trump in places that voted for him last time that exceeds 2016.”

Mr. Trump still faces significant headwinds in Pennsylvania. Recent polling shows Mr. Trump’s strength dipping among those voters compared with four years ago, despite the famous intensity of his supporters. In three Pennsylvania polls in the last week, Mr. Trump’s support among white voters without college degrees landed at 52 percent, 57 percent and 58 percent — all below the 64 percent he won in 2016, according to Pennsylvania exit polling. Then there is the fact that the overall share of the white population that doesn’t go to college is declining, as more people get college degrees and more diversity comes to the state’s cities.

“He’s going after a population that’s shrinking,” said William Frey, a demographer at the Brookings Institution, who has produced similar models. “He just has to eke out even more of them than he did last time.”

In 2004, when President George W. Bush ran for re-election, working-class whites voted at higher rates in Pennsylvania than they did in 2016, Mr. Frey noted. He estimated that if turnout increased to 2004 levels, that would add about 130,000 more such voters this year.

John Yudichak, a moderate state senator from northeastern Pennsylvania, is among those who have left the Democratic Party in the Trump era. He became an independent in late 2019 and now caucuses with the Republicans in the State Capitol, even as he supports Mr. Biden. But Mr. Yudichak warned of his former party’s drift from its working-class roots to become “a party of the elite.”

“Politics is math,” Mr. Yudichak said. “If the Democratic Party is only going to be of the college-educated elite,” he said, noting that nearly 90 percent of those in his district have attained only a high school education, “the math doesn’t work. You’re going to lose a lot of elections.”

Luzerne County, at the center of Mr. Yudichak’s district, is one of three Pennsylvania counties that Mr. Trump flipped in a dramatic fashion in 2016, carrying it by 19 percentage points — only four years after Mr. Obama had carried it by almost five points.

“Trump — I don’t know how he did it,” Mr. Yudichak said. “He was able to connect and sincerely make people believe here in Luzerne County that he valued them.”

Luzerne County is one of three Pennsylvania counties that Mr. Trump flipped in a dramatic fashion in 2016, carrying it by 19 percentage points.Credit...Sean Mckeag/The Citizens' Voice, via Associated Press

The Trump campaign keeps a close tally on these figures. A campaign presentation in September noted that Mr. Trump’s margin over Mrs. Clinton in Pennsylvania’s 45 smallest counties was 230,000 more votes than the G.O.P. advantage in 2012.

“He can take a red county and make it even more intensely red — it’s remarkable,” said Senator Bob Casey, Democrat of Pennsylvania, who vividly recalled watching the early 2016 returns and wrongly believing that the Democratic margins in Philadelphia and Pittsburgh would be enough to carry the state.

Mr. Casey has since memorized the exact number of votes that Mrs. Clinton lost by: 44,292. “I wanted that number to haunt me,” he said.

The flip side of Mr. Trump’s strength in more rural areas, Mr. Casey said, is that Democrats are winning the suburbs, particularly those outside Philadelphia, by bigger margins than ever. Mr. Casey said he had won those suburbs in his 2018 re-election by more than double Mr. Obama’s margin in 2012. “Not because I’m the greatest candidate God ever created,” he said. “It’s because people were damn angry.”

How much of Mr. Trump’s strength among white working-class voters was simply a rejection of Mrs. Clinton rather than an embrace of Mr. Trump is one of the questions that 2020 will help answer. But there are many signs that deep animosity toward Mrs. Clinton played a critical role.

Mr. Yudichak said one run-in at the State Capitol with a Trump supporter was seared in his memory:

“He said, ‘Look, Hillary Clinton and the Democratic Party make me feel bad about myself. Donald Trump makes me feel good about who I am. I only have a high school education, but I got a good union job. I go to work every day. Why am I a bad guy? Hillary’s calling me deplorable.’”

Like some other ancestral Democrats in the state, Mr. Mitchko registered as a Republican this year, formalizing his departure from the party.Credit...Hannah Yoon for The New York Times

In Mr. Biden, the Democrats have nominated a candidate whom David Axelrod, the former chief strategist for Mr. Obama, likes to call “culturally inconvenient” for Mr. Trump: a Scranton-born politician who has long emphasized his blue-collar roots, no matter that it has been nearly a half-century since his election to the Senate.

Of late, Mr. Biden has geographically located his pitch in northeastern Pennsylvania, framing the 2020 election as a choice between “Scranton and Park Avenue.” He first unfurled the line at a televised town hall not far from his hometown last month, and it quickly became a favorite.

“I will win Scranton,” Mr. Biden told reporters on the tarmac that night. “This is home. I know these people.”

In nearby Olyphant, Lauren Telep, 64, a rare lifelong Republican in these parts, stopped by Mr. Mitchko’s house for a refill on signs and marveled at her hometown’s transformation. Not so long ago, the politics here had been so blue that she said, “God, the Almighty, if he ran on the Republican ticket in this town — at one point was probably like 90 percent Catholic — he would still lose.”

Political strategists of both parties say it is less about winning particular cities and instead about limiting the losses in hostile territory and running up the margins in favored strongholds.

Mr. Casey, who lives in Scranton, said he was confident that Mr. Biden’s local roots would help him “shave two points here, three points there” from Mr. Trump’s margins. But he also said that the Democratic Party faced a backlash in his home region for its necessary and worthwhile devotion to diversity — its messaging this year on racial justice and policing as Mr. Trump has executed a campaign of white grievance.

Many rules have changed during the pandemic, making it harder to figure out how to cast your ballot. This interactive guide can help you ensure your vote is counted. 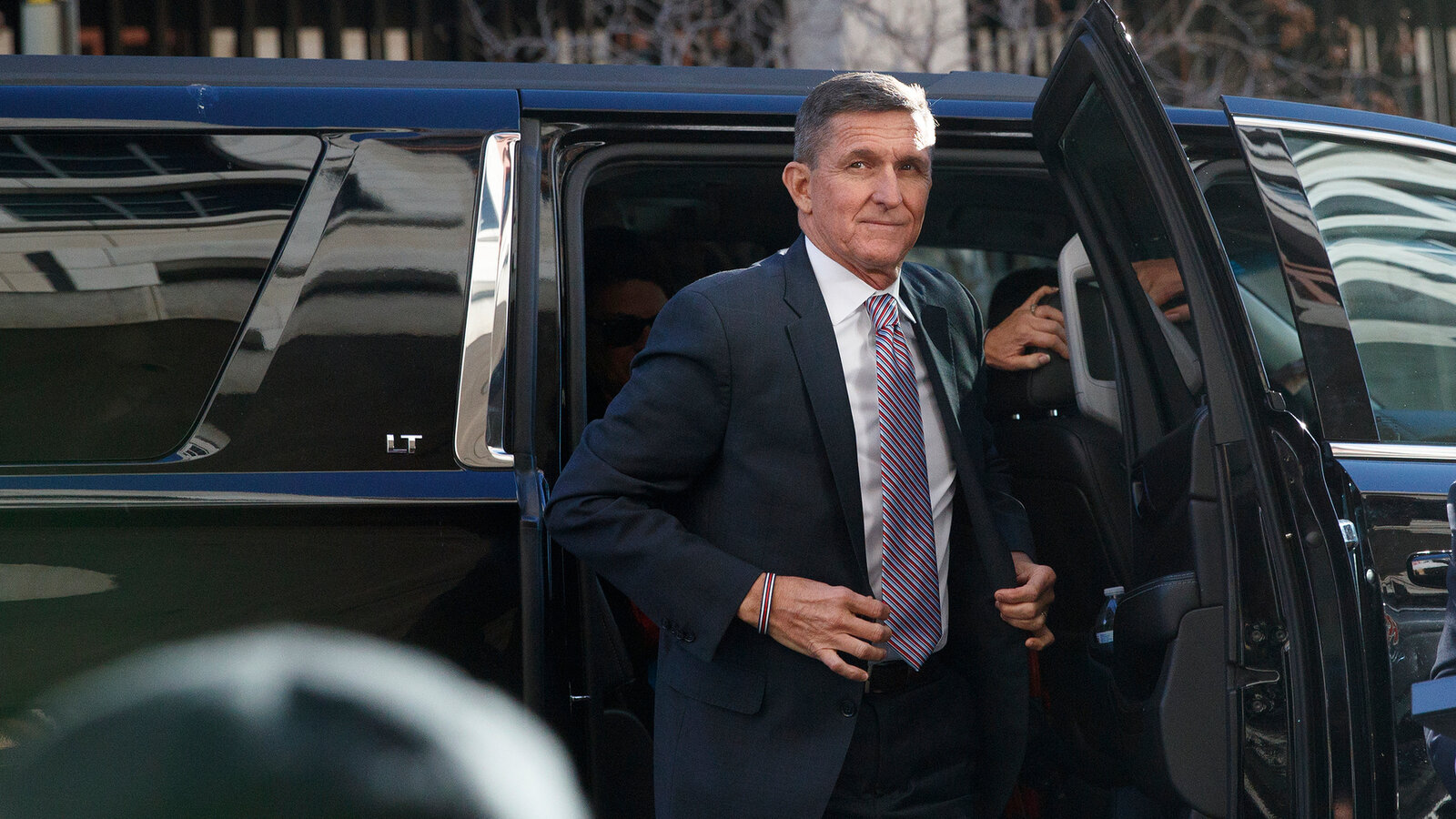 Trump Is Said to Plan Pardon of Flynn 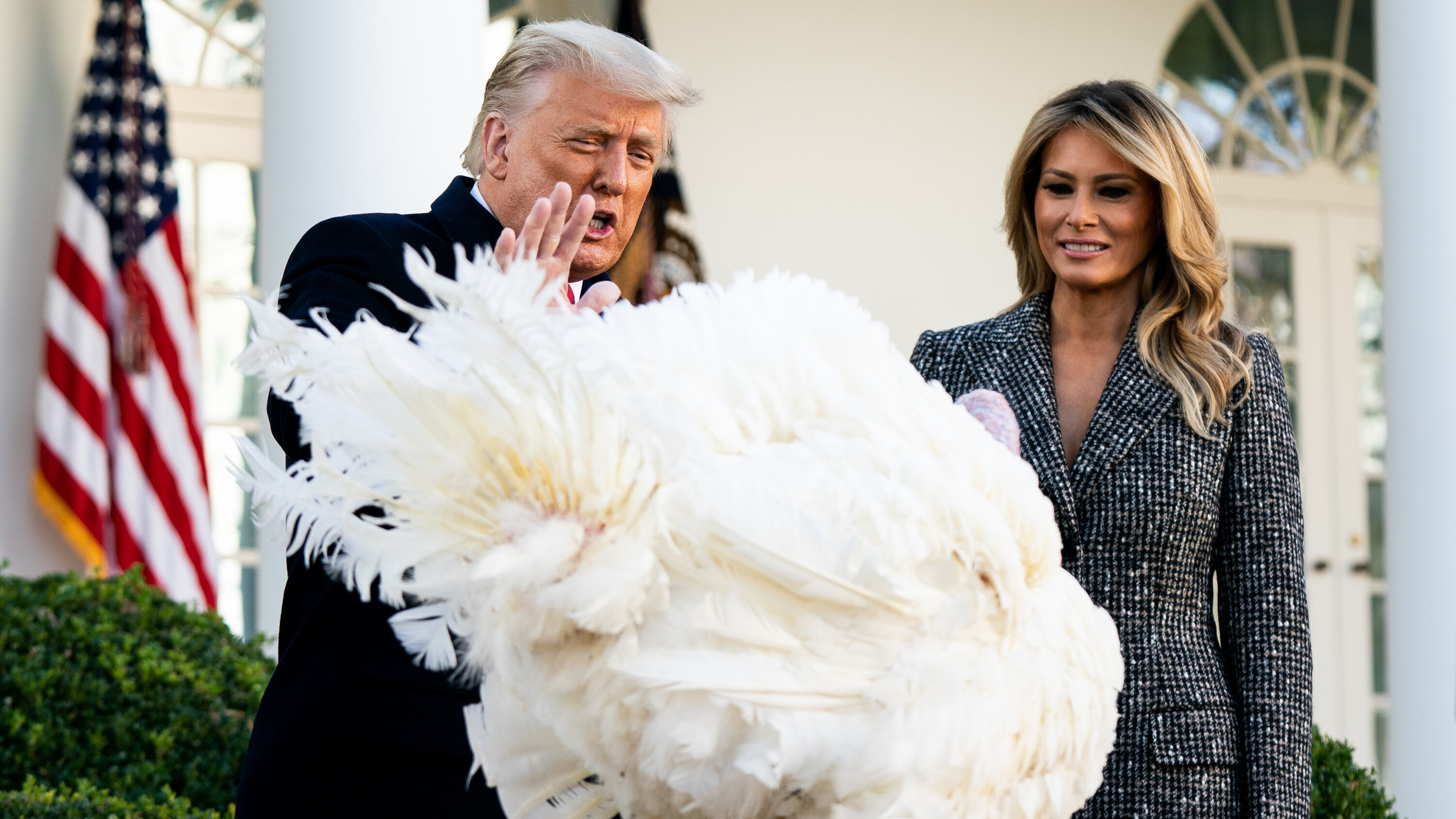 No, President Trump Did Not Pardon Himself 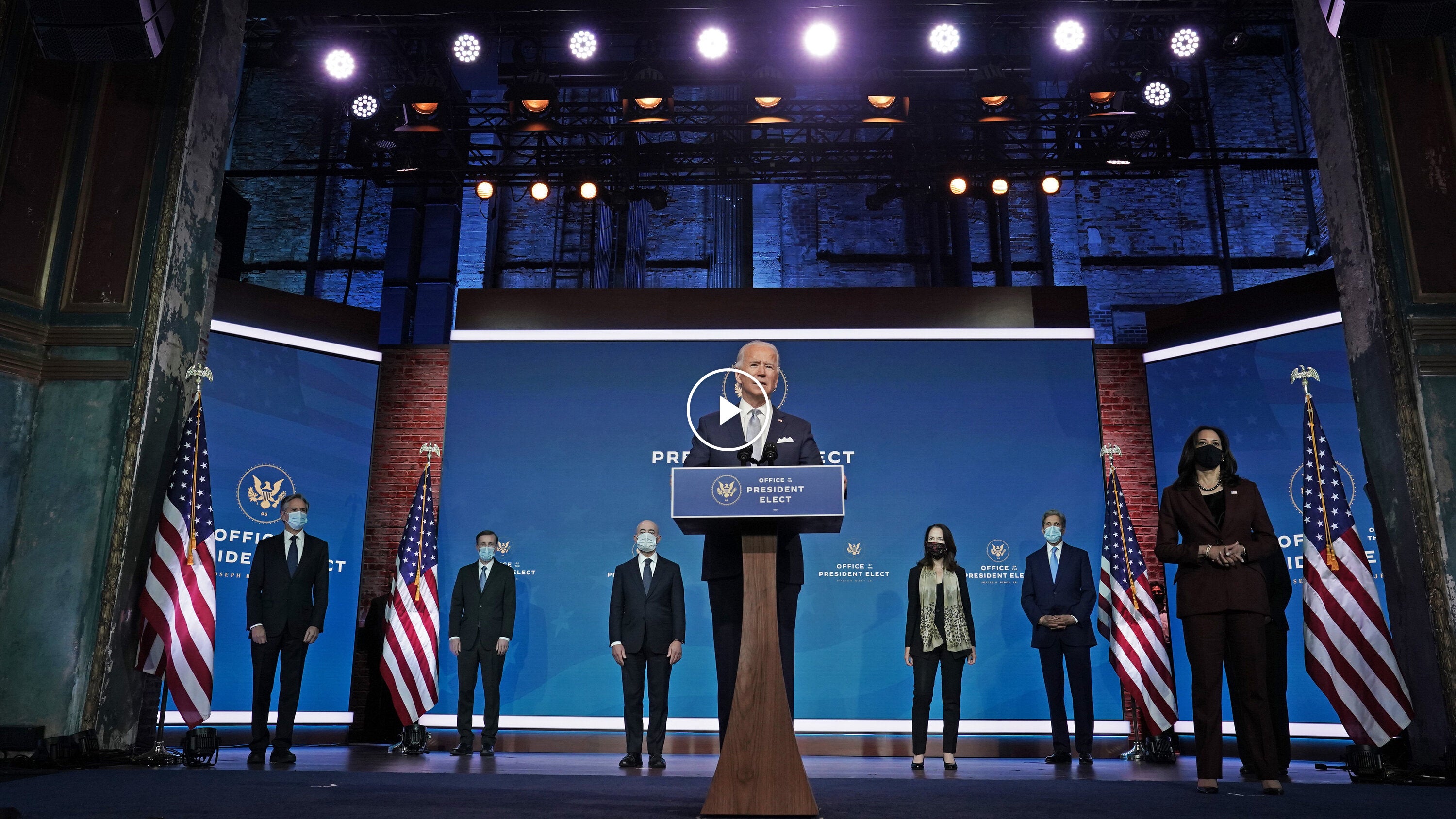 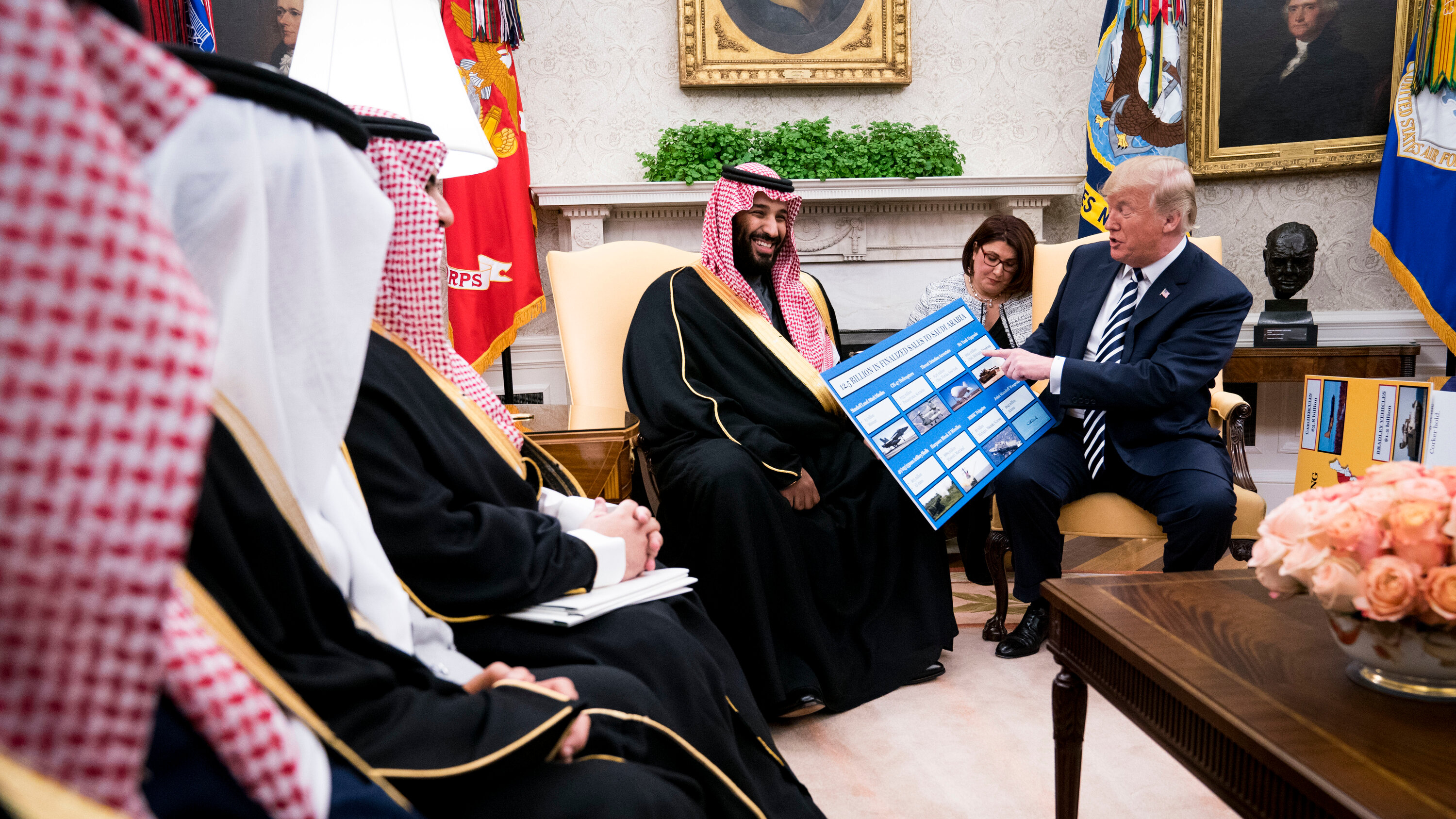 After Trump’s Embrace, Saudis Brace for a Chillier Tone from Biden 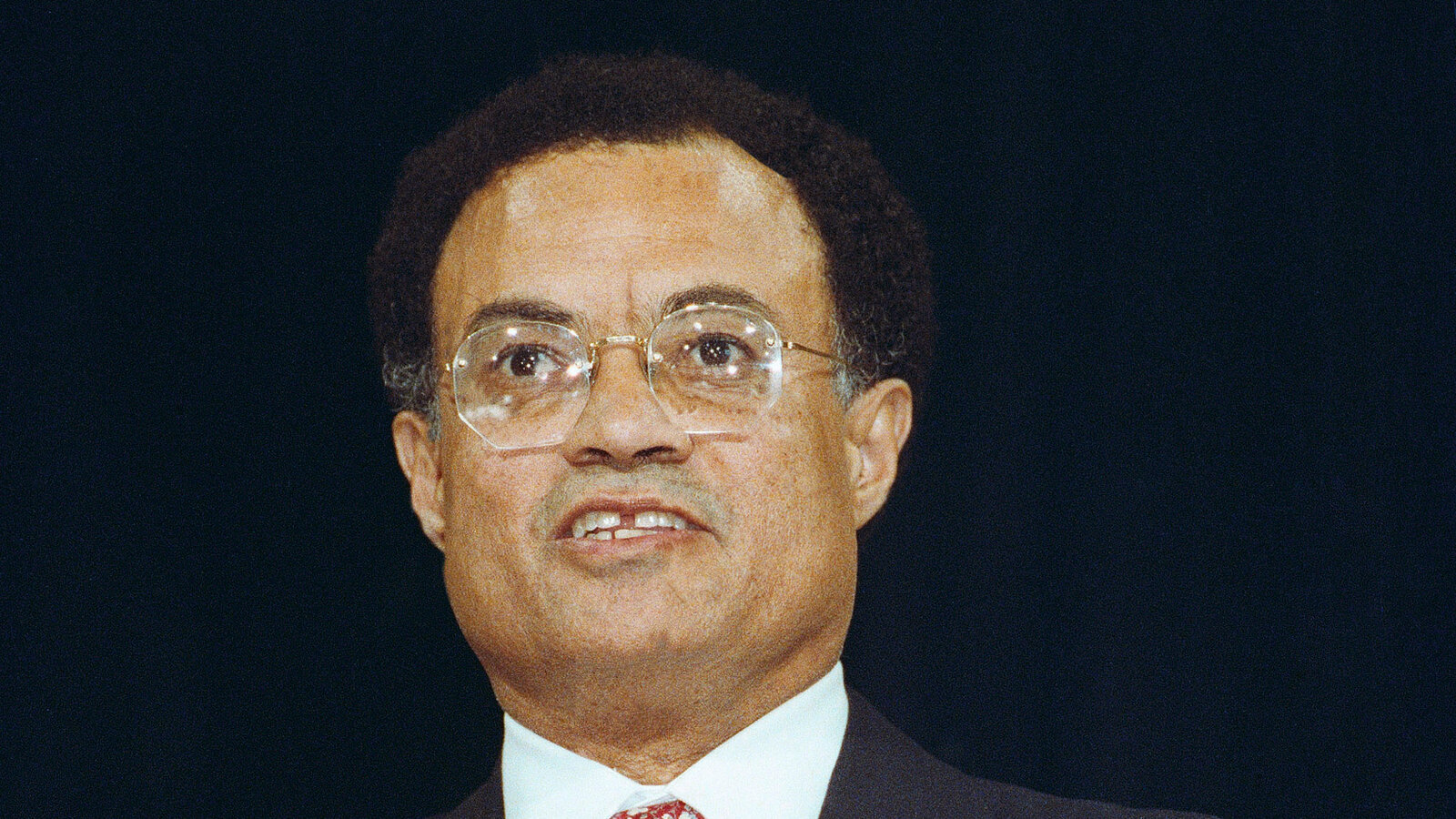 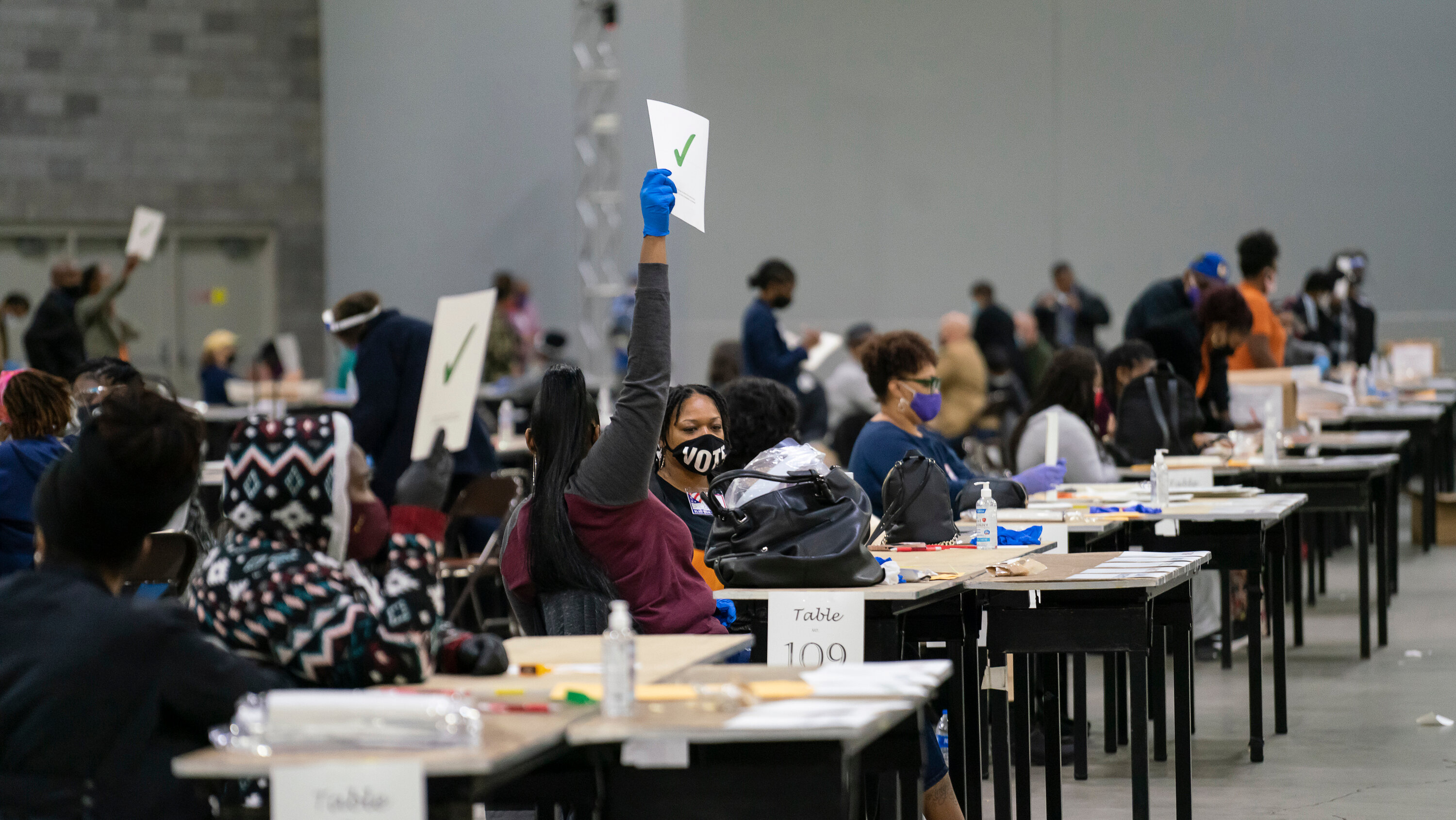