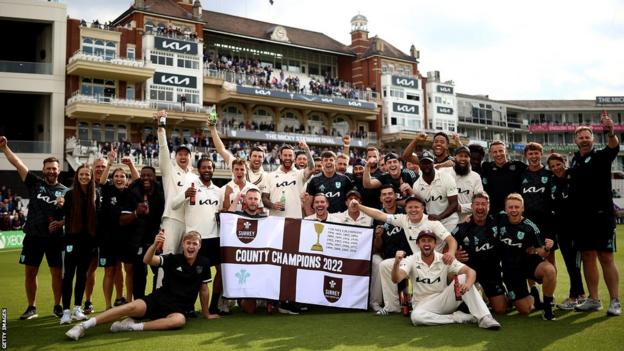 Surrey sealed the 2022 Championship title with a 10-wicket win over Yorkshire, who were relegated a week later

County champions Surrey will start the 2023 season with a repeat of last season's final game, a trip to Emirates Old Trafford to face Lancashire.

Promoted Middlesex will start at home to Essex, while Division Two champions Nottinghamshire go to Hampshire.

Relegated Yorkshire start life back in Division Two at home to Leicestershire.

For the Tykes, relegated on the final afternoon of the 2022 campaign by Liam Norwell's amazing nine-wicket haul for Warwickshire, it will be a first Division Two fixture in 11 years.

They will be up against the Foxes who have not won a County Championship game since September 2021.

Worcestershire, whose ground is next to the River Severn and prone to early season floods, start with two away games, to Derbyshire and Durham, before a first home game against Gloucestershire at New Road on 20 April.

The opening round of fixtures start on Thursday, 6 April and then begin on a Thursday for the following six rounds throughout April and the first three weeks of May.

That includes the first London derby of the summer, Surrey v Middlesex at The Kia Oval on 11 May, with the return at Lord's starting on 18 July.

After the break for the T20 Blast, which will begin with a double-header at Edgbaston on 20 May, there will then be two rounds of Championship fixtures in June, both starting on a Sunday.

2022 County Championship team of the season

There are then three more rounds of red-ball cricket in July, either side of the T20 Blast Finals Day back at an already sold-out Edgbaston on 15 July.

There will again be no Championship cricket in August. The peak time of the school summer holidays will again be saved for the Men's and Women's Hundred - and the One-Day Cup.

The final four rounds of Championship action take place in September, including two visits to the capital for Warwickshire, first against Surrey at The Oval, then Middlesex at Lord's, their first return there since becoming the last county team to win the Bob Willis Trophy, in 2021.

Defending T20 Blast champions Hampshire start at Somerset on 24 May.Friday nights have again been designated as 'Blast nights', with 48 games taking place across six consecutive Friday nights.One-Day Cup champions Kent begin the defence of their title against Yorkshire at Scarborough on 1 August.The One-Day Cup final will again be held at Trent Bridge, on Saturday, 16 September.

The Charlotte Edwards Cup will feature 20 double-headers, shared with men's T20 Blast matches from 25 May until 7 June, at 17 venues. That means an extra fixture per team.Sunrisers host Central Sparks in the first Charlotte Edwards Cup game of the summer on 18 May.New Road will host the final on 10 June.The fixture list for the Rachael Heyhoe Flint Trophy has been doubled for 2023. There will be 14 50-over fixtures per season for each women's regional team, starting on 22 April.Northampton's County Ground will host the final on 24 September.