Four years after the battle for the northern Syrian city of Raqqa, children and families are still living in damaged homes with severely limited access to clean water, electricity, and education, a report by Save the Children has found.

Raqqa, once the self-styled “capital” of the ISIL (ISIS) group in Syria, was subjected in 2017 to a heavy air and ground offensive by the US-led coalition to defeat the group and gain control of the city.

At the peak of the bombing campaign, the city faced 150 air raids a day, causing immense damage to the infrastructure and buildings, many of which remain in ruins, according to the report published on Tuesday.

“Children and their families in Raqqa live every day in a ruined city, with limited options, amid drought, pandemic and a Syria-wide economic crisis,” Sonia Khush, the Syria Response Director for Save the Children, said.

Reports estimate that at least 36 percent of the city’s buildings remain destroyed. A drought in northeast Syria has also caused a public health crisis, with a reported increase in waterborne diseases and challenges in preventing the spread of COVID-19.

While thousands of people have moved back to the city, three-quarters of Raqqa’s population rely on aid in order to buy food and other basic goods and services.

Aida*, a widow and mother of four, lives with her children in a severely damaged house that does not have running water or electricity.

The 27-year-old, who fled Aleppo nine years ago, is afraid to let her children play outside.

“I get scared when my children go outside because they might get hurt, so I do not let them go out,” she told Save the Children.

“There is a destroyed building here and I’m afraid there will be something [like a landmine] underneath. You never know. I keep them away from it.” 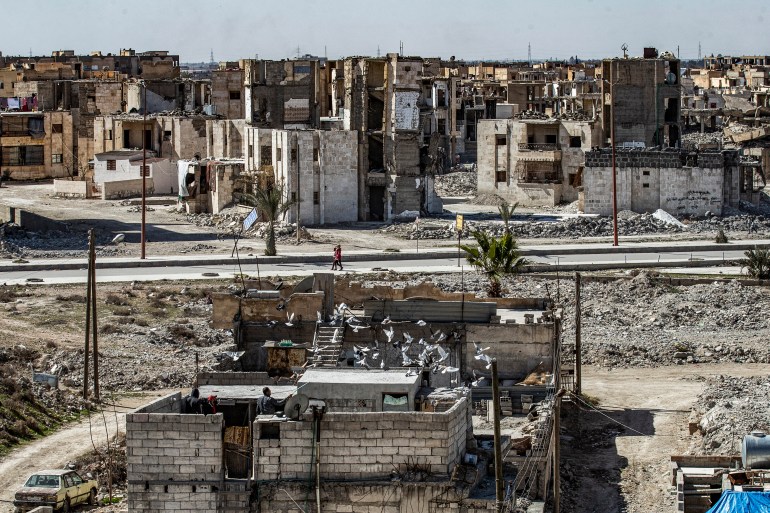 According to Save the Children, the conflict and its aftermath decimated Raqqa’s education sector, with 80 percent of the city’s schools damaged.

Khush said that while a decade of war has caused a mental health crisis for children and their families, children in Raqqa cannot enjoy basic activities or access services such as playing or getting an education to “find enjoyment in life and prepare for the future”.

“Children are at risk of injury and death even from doing nothing but sitting home in the rubble,” she said.

Khush called for “substantive humanitarian responses” from the international community, particularly from the anti-ISIL coalition members.

“They bear responsibility to subsequently address the consequences of their military action,” she said.

“It is vital that they and all humanitarian donors step up to ensure that basic services are restored and opportunities are provided, to give children the chance of a brighter future after all they have endured over the course of Syria’s conflict.”

* Names have been changed