Chileans take to the streets to mark 3rd anniversary of upheaval

Hundreds of Chileans have taken to the streets of the capital to mark the three-year anniversary of a social uprising, which propelled the South American country to draft a new constitution that was rejected by voters last month.

The demonstrators, many of them young students, wore goggles and face masks as protection against tear gas on Tuesday. They stopped traffic on Santiago’s central Alameda avenue, erected burning barricades and blocked access to several metro stations.

Police deployed 25,000 officers and used water cannons to disperse the protesters. Many shops closed early, or did not open at all, while schools sent students home early.

“We have gained nothing” in the three years since the movement began, said Andrea Valdebenito, a 43-year-old social worker who was among those gathered.

The third anniversary of the social revolt comes after 62 percent of Chile’s electorate in early September rejected a new constitution, which had been drafted by a largely left-wing constituent assembly. 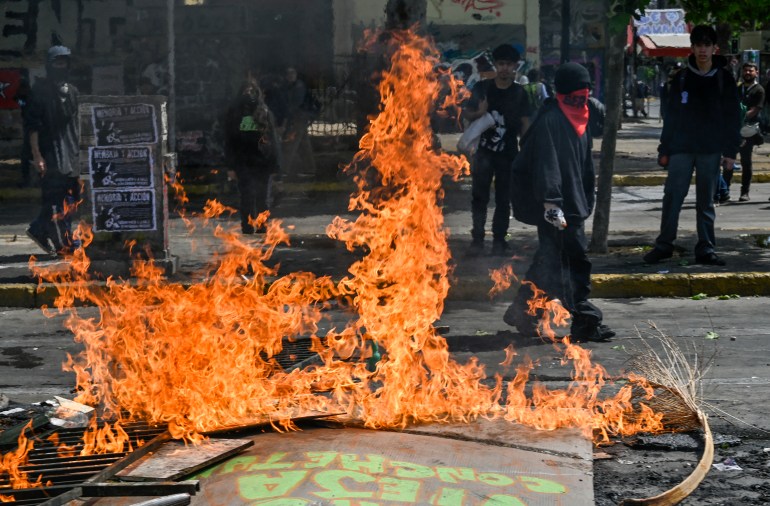 A majority of Chileans in October 2020 voted for a new constitution to replace the one dating back to the dictatorship of General Augusto Pinochet.

The push for a new magna carta emerged during the 2019 social protests, which saw millions of Chileans take to the streets to demand better health care, education, pensions, housing and other services.

More than two dozen people were killed and more than 400 others suffered eye injuries, while more than 3,100 complaints of human rights violations by police were reported.

Chile’s President Gabriel Boric, a former student leader who had backed the 2019 protests and the constitution-writing process, on Tuesday called for a new social dialogue to give shape to much-needed reform.

“It [the 2019 protest movement] was an expression of pain and fractures of our society,” Boric said in recorded comments.

The president, who took office in March on a promise to turn the deeply unequal country into a greener, more egalitarian “welfare state”, has seen his approval rate drop in recent weeks.

He shuffled his cabinet less than 48 hours after Chileans rejected the new constitution, describing the referendum results as “one of the most politically difficult moments” that the young leader has had to face.

But on Tuesday, Boric promised not to let the 2019 protesters’ demands go unheeded.

“The social unrest expressed – and brought – a lot of pain and has left huge consequences,” he said. “We will not allow it to be in vain, we cannot be the same as a society after this experience, we cannot make the same mistakes.”