China continues to take internet censorship, surveillance and propaganda to “unprecedented levels”, Reporters Without Borders (RSF) has said, making it one of the world’s worst countries for journalists.

In its annual press freedom index, published on Tuesday, the global watchdog also highlighted an increase in repression and attacks on journalists worldwide during the COVID-19 pandemic.

The index evaluates the press freedom situation in 180 countries and territories, and RSF said its data showed that journalism is “totally blocked or seriously impeded” in nearly three-quarters of the countries evaluated, making it even harder for people to access proper information at a time of a health emergency.

Aside from China, the four countries at the bottom of the ranking are Djibouti, Turkmenistan, North Korea and Eritrea.

“Journalism is the best vaccine against disinformation,” RSF Secretary-General Christophe Deloire said in a statement accompanying the report.

“In response to the virality of disinformation across borders, on digital platforms and via social media, journalism provides the most effective means of ensuring that public debate is based on a diverse range of established facts.”

Deloire, however, said that the production and distribution of information “are too often blocked by political, economic, technological and, sometimes, even cultural factors”.

In 2021, China continued to be the world’s “biggest jailer of press freedom defenders”, RSF said, with more than 120 currently detained in the country, “often in life-threatening conditions”.

Since the emergence of COVID-19, Chinese authorities have tightened their grip on news and information, with seven journalists still being held for their coverage of the pandemic. Lawyer-turned-journalist Zhang Zhan is among those in prison.

She was found guilty in December of “picking quarrels and provoking trouble” for her reporting on the pandemic in Wuhan, where the novel virus was first detected.

Additionally, more than 450 social media users in China were briefly arrested for sharing “false rumours” of the virus, RSF said.

The censors shut down websites, block access to IP addresses, filter web pages and even block keywords on social media. In an earlier report from March, RSF said that the Cyberspace Administration of China (CAC) shut down nearly 130,000 social media accounts and more than 12,000 websites between January to September 2020.

RSF went on to criticise China for imposing a national security law in semi-autonomous Hong Kong, saying the legislation “seriously threatens journalists”. It noted that Jimmy Lai, the founder of the pro-democracy newspaper Apple Daily, has been arrested and charged under the security law and is now facing a possible life sentence.

The country that fell the furthest in the RSF ranking was Malaysia, which dropped 18 spots to 119. Part of the reason was the government’s introduction in March of an “anti-fake news” emergency decree, which authorities said was necessary to fight misinformation during the COVID-19 pandemic.

Under the decree, issued under emergency powers, those found guilty of publishing “fake news” face a fine of as much as 100,000 Malaysian ringgits ($24,000) and/or a three-year prison term.

But human rights groups say the decree does not establish standards for determining what is false, raising the risk it could be used to silence criticism or other speech that the government does not like.

RSF, in a statement at the time of the decree’s issuance, said “the ordinance makes the dissemination of information directly subject to the goodwill of authorities – police or judicial”. It noted that Malaysian authorities had refused last year to renew work visas for two Australians who worked for Al Jazeera, Drew Ambrose and Jenni Henderson, because they had worked on a documentary about a wave of arrests of migrant workers during the pandemic.

Across the world, RSF said, the index data reflected “a dramatic deterioration in people’s access to information and an increase in obstacles to news coverage”. 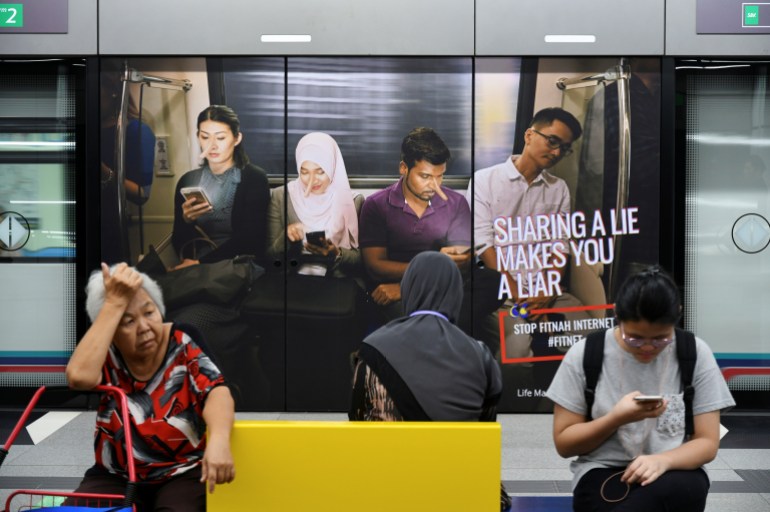 The country that fell the furthest in 2021 was Malaysia, dropping 18 spots to 119, following the recent “anti-fake news” decree issued by the government under its emergency powers [Stringer/Reuters]“The coronavirus pandemic has been used as grounds to block journalists’ access to information sources and reporting in the field. Will this access be restored when the pandemic is over?” it asked.

The watchdog also expressed concern over falling trust in the press, noting that the 2021 Edelman Trust barometer revealed “a disturbing level of public mistrust of journalists”. The survey found that 59 percent of respondents in 28 countries said that journalists deliberately try to mislead the public by reporting information they know to be false.

But, “in reality, journalistic pluralism and rigorous reporting serve to combat disinformation and ‘infodemics’, including false and misleading information,” said RSF.

Overall, the watchdog said, the level of global press freedom has deteriorated by 12 percent since the ranking was created in 2013.