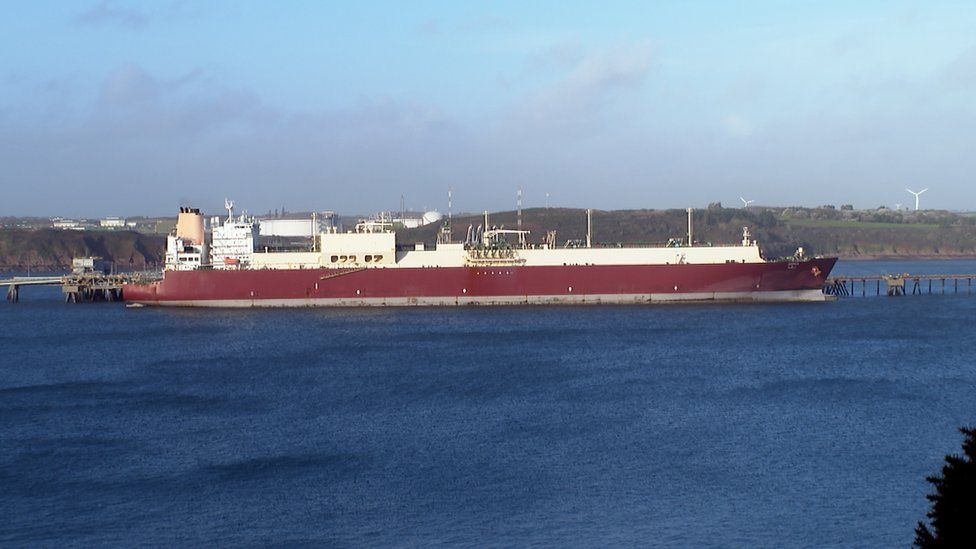 LNG imports have soared in the wake of the Ukraine war which has limited piped supplies from Russia.

Analysis, seen by the BBC, shows that the production and transport of LNG causes up to ten times the carbon emissions compared to pipeline gas.

There are worries that the extra carbon could hamper efforts to rein in warming.

World leaders will meet in Egypt next week for the COP27 climate conference, amid concern that the war in Ukraine has distracted efforts to cut carbon.

In the UK and Europe, worries over energy supplies have seen an unprecedented uptick in imports of LNG, a liquefied version of natural gas.

Data shows that LNG cargo import volumes were up 65% in the first nine months of this year compared to 2021.

A tanker unloads Russian LNG at a terminal in France

But according to new analysis by Norwegian research firm Rystad Energy, shared with the BBC, the making and shipping of liquid natural gas is extremely energy intensive.

To make it, fossil gas is cooled in giant fridges to -160C.

As the gas liquefies, it shrinks, and becomes six hundred times smaller, making it much easier to transport.

While the emissions from burning the gas are the same whether it's piped or in liquid form, the extra energy involved in making and transporting the liquid is significant.

At ports like Grain near London, LNG is turned back into gas and pumped into the UK network

"For piped gas from Norway, we see around 7kg of CO2 per barrel, but for LNG imports into Europe, we estimate the average is over 70, so around 10 times lower for piped gas versus LNG," said Patrick King from Rystad.

"By the end of next year, if Russia fully turns off the gas taps, and all that additional gas needs to come from LNG sources, we will see an additional 35 million tonnes of imported upstream CO2 emissions compared to 2021."

That extra CO2 is the equivalent of adding around 16 million cars to the UK's roads for two years.

For some observers, this rush for LNG is a triumph of short-term thinking.

"The real opportunity, out of a bad situation is to put incentives in place to reduce our gas usage," said Dr Paul Balcombe, from Queen Mary University of London. He wasn't involved in this new study, but has researched LNG emissions previously.

"We need to increase energy efficiency and our renewables deployment. Rather than just looking at the really, really short-term replacement, which is LNG, we need to look at the slightly longer term, which will have way better cost implications, financial and environmental."

Environmental campaigners are worried that the current embrace of extra LNG may not be a one off. While none are currently planned for the UK, there are plans for the installation of around 20 new LNG terminals on the European continent.

"It's really scary to be honest," said Eilidh Robb, who is with Friends of the Earth Europe.

"The challenge is that to make these terminals economically viable, countries have to agree to very long contracts to bring in the gas and the terminals themselves can last up to 40 years, which means a very long lock-in effect for these fossil fuels that we are trying to get out of."

One other problem with these imports is their origin. According to Rystad, around 16% of the liquid is coming from Russia.

In buying this gas from Russia, the UK and Europe are not just helping to fund the invasion of Ukraine, but they're also making it more difficult to win the war against climate change.