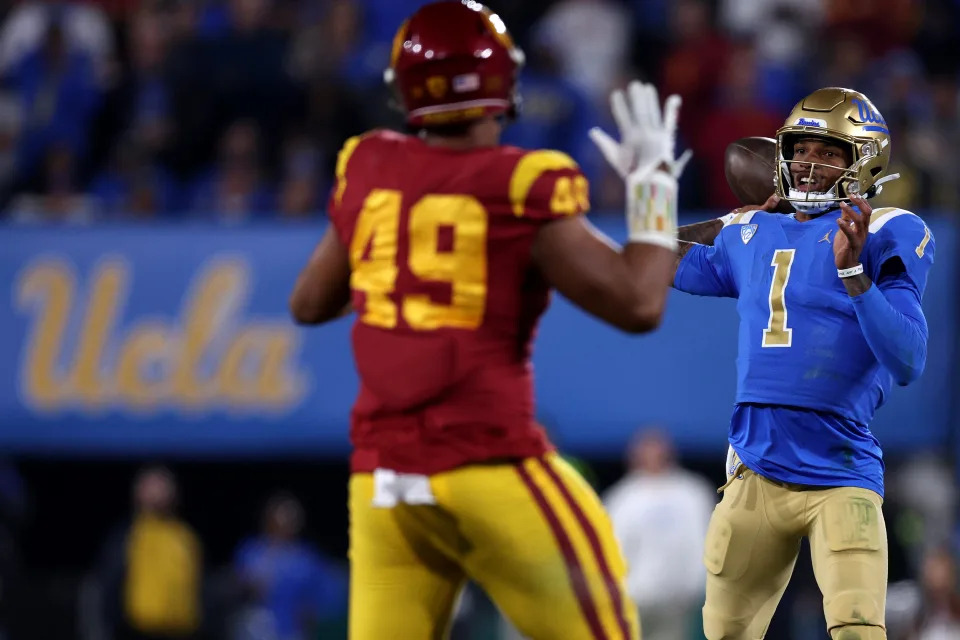 With rivalry week on the horizon next week, college football's undefeated teams were perhaps looking ahead.

No. 2 Ohio State, No. 3 Michigan and No. 4 TCU all had to survive some close calls on Saturday.

Ohio State held off a furious late rally from Maryland to win 43-30, Michigan beat Illinois 19-17 on a field goal with 9 seconds to play, and TCU prevailed 29-28 over Baylor on their own last-second field goal.

Even No. 1 Georgia had a less-than-convincing 16-6 victory over Kentucky. In the end, everyone got the job done to get up a high-stakes final weekend of the regular season.

But tonight the spotlight moves to the Pac-12.

USC is the conference's lone team remaining in the College Football Playoff race, and its challenging final stretch begins with a crosstown trip to UCLA on Saturday night.

There's also another excellent matchup out in Eugene as Oregon hosts Utah with significant Pac-12 title implications at stake.

We're also keeping an eye on No. 5 Tennessee, which is in a battle at South Carolina.

Here's what else we're watching tonight.

Like the USC-UCLA game, this matchup is massive for the Pac-12 title race. Both Utah and Oregon are 6-1 in conference play, a half-game behind 7-1 USC and a game in front of UCLA and Washington, both of whom are 5-2.

QB injuries will factor heavily into this one. While Utah QB Cam Rising seems to be back after missing a game a few weeks back, Oregon's Bo Nix is much more of a question mark. He seemed to hurt his foot or ankle late in last week’s heartbreaking loss to Washington. The coaching staff has remained quiet about Nix’s status, but the fact that Oregon went from a 3-point favorite to a 1.5-point underdog on Wednesday night says a lot. If Nix can’t go, Ty Thompson will get the nod in this crucial matchup.