The layoffs hit across many divisions, including the engineering and machine learning units, the teams that manage content moderation, and the sales and advertising departments. 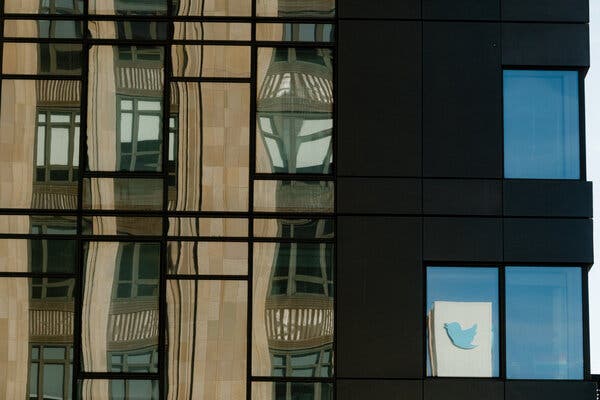 On Friday morning, at least nine security guards were seen patrolling Twitter headquarters in San Francisco. Employees had been told to stay home as layoffs were carried out.Credit...Jason Henry for The New York Times

SAN FRANCISCO — When the ax came down at Twitter on Friday, it did not fall smoothly.

The first sign that some of the company’s 7,500 employees had been laid off came when their email accounts were shut off late Thursday. Yet they received no official word about termination and some of their Slack accounts still worked. In Twitter’s offices in Ireland and Britain, employees stayed up late waiting for the San Francisco headquarters to inform them of their job status. Some learned they were unemployed in the middle of their night.

The cuts were so haphazard that at one late-night meeting about the Twitter Blue subscription product, at least one worker was locked out of the company’s systems during the call, according to three people with knowledge of the meeting and internal messages viewed by The New York Times.

Many employees vented on Twitter. Chris Younie, a member of the partnerships team based in London, discovered he had been laid off when he checked his corporate laptop and email account after midnight and could not access the internal systems.

“So grateful this is happening at 3am,” Mr. Younie posted sarcastically on Twitter. “Really appreciate the thoughtfulness on the timing front guys.”

By early Friday, the scale of the layoffs by Elon Musk, Twitter’s new owner, was becoming clear: Roughly half of the company’s work force, or about 3,700 jobs, had been eliminated, four people with knowledge of the matter said. The cuts hit across many divisions, including the engineering and machine learning teams, the trust and safety teams that manage content moderation, and the sales and advertising departments. Rarely have layoffs this deep been made by a single individual at a tech company.

On Saturday, Jack Dorsey, Twitter’s co-founder, apologized to the company’s former and current employees in a tweet. “I realize many are angry with me,” he wrote. “I own the responsibility for why everyone is in this situation: I grew the company size too quickly.”

The layoffs leave Twitter significantly changed just over a week after Mr. Musk closed his blockbuster $44 billion buyout of the company. The actions raise questions about how the world’s richest man can effectively operate the social media service and carry out his ambitious plans for it, including adding new product features, boosting the number of users and finding other revenue streams.

Mr. Musk, 51, faces numerous challenges at Twitter, which he has taken private. He is under financial pressure to make the deal work, having taken on $13 billion in debt for the buyout. Yet the company has lost money for eight of the past 10 years and, like other social media companies, faces a decline in digital advertising amid a slowing economy.

At the same time, some advertisers, which provide 90 percent of Twitter’s revenue, have paused their spending on the platform, citing fears over how the site’s content might change under Mr. Musk. That pullback accelerated on Friday as advertisers like Volkswagen Group joined the growing boycott. Civil rights groups have repeatedly warned that loosening Twitter’s content rules might lead to a rise in toxic speech.

On Friday, Mr. Musk addressed Twitter’s layoffs while speaking at an investment conference in New York. He said the cuts were needed because “Twitter was having pretty serious revenue challenges and cost challenges” before the deal, which have been made worse by “activist groups pressuring major advertisers to stop spending money on Twitter.”

A blockbuster deal. In April, Elon Musk made an unsolicited bid worth $44 billion for the social media platform, saying he wanted to turn Twitter into a private company and allow people to speak more freely on the service. Here’s how the monthslong battle that followed played out:

He added that he had tried “every possible thing to appease” these activists and reiterated that he had not changed Twitter’s content rules. He later said in a tweet that the company was losing more than $4 million a day.

Sandra Sucher, a professor of management at Harvard University who has studied layoffs for more than a decade, said Twitter’s cuts were among the most poorly handled that she had seen. While the scale was not unprecedented, it was unusual to see layoffs done so quickly without a detailed explanation provided to workers about who was being laid off and why, she said.

“This is a master class in how not to do it,” Ms. Sucher said. “If you were going to rank order ways to upset people, telling them you’re going to do it in advance, without rationale, that is a particularly inhumane way to treat them.”

Mr. Musk already faces legal challenges from the layoffs. On Friday, five former Twitter workers filed a class-action lawsuit against the company for failing to give advance notice of the cuts. California and federal laws require companies to notify workers in advance of mass layoffs.

While Mr. Musk said in a tweet on Friday that laid-off workers were offered three months’ severance, U.S. employees were told that they would be kept on the payroll for two months before being officially terminated, a maneuver that could help Twitter skirt the advance notice required by law for a mass layoff. The employees could then receive an additional month of severance.

Mr. Musk ordered the job cuts across Twitter shortly after taking ownership of the company on Oct. 27. Over the past week, workers braced for layoffs by creating groups on messaging apps to maintain communications with each other in case anything happened. Some added each other on LinkedIn and exchanged personal emails and phone numbers in meetings, said five former and current employees.

On Thursday evening, employees received a companywide email that said the layoffs would begin on Friday. They were instructed to go home and not go to the offices on Friday.

“This action is unfortunately necessary to ensure the company’s success moving forward,” the email, which was signed Twitter, said.

On Twitter, employees posted the hashtags #OneTeam and #LoveWhereYouWorked to commiserate with one another. Some soon tweeted that they had been logged out of their work computers or internal platforms like Slack.

But access was cut in a staggered and seemingly arbitrary fashion. Some people received text messages from colleagues saying they had been logged out of some work apps but were temporarily able to open their email or work apps, before they eventually lost access, too.

In Dublin, home to Twitter’s European headquarters, some workers received an email on Friday morning about the cuts. “These decisions never come easy and it is with regret that we write to inform you that your role at Twitter has been identified as potentially impacted or at risk of redundancy,” it said.

In the Tokyo office, some Twitter workers received the same email toward the end of their workday on Friday, one worker there said.

Other employees were still being summoned to meetings. Esther Crawford, a project manager, asked people to join a “standup” meeting at 9:30 p.m. in San Francisco on Thursday as some layoff notices went out.

“I recognize this is a crazy moment where Tweeps are losing access and the layoff is in progress,” she wrote on Slack, adding a broken heart emoji and a link to a video conferencing room, according to messages viewed by The Times. Ms. Crawford works on Twitter Blue, a subscription product that faces a Nov. 7 deadline for rolling out or those on the team face termination.

A small group of employees tuned into the meeting via video conference as Ms. Crawford walked through product updates and troubleshooting issues. Suddenly, one member of the team dropped off in the middle of the call, said three people with knowledge of the incident. The person’s access had been cut off from the Twitter network.

Many of the cuts were deep. The human rights and disability experience teams were cut back, said three people familiar with the decision. The internet technology team — which is partly responsible for keeping the site functioning — became “a skeleton crew,” two people said. The marketing, social, curation, studio and enforcement teams, and the “Redbird” division of platform and infrastructure support, were also hit.

People who work from home were targeted for cuts, two people said.

On Friday morning at Twitter’s San Francisco offices, which were closed to most employees, at least nine security guards patrolled the two buildings that make up the headquarters, pacing around the perimeter and checking that some doors were locked. On a floor above one of the lobbies, the lights overhead were dim.

Those who were not let go tried to assess who remained, according to private group messages seen by The Times. They traded notes of support for workers who lost their jobs while they were pregnant or on work visas. Some employees had volunteered to be laid off so that colleagues on visas would not lose their jobs, two people familiar with the layoffs said.

Laid-off workers were told not to publicly discuss their experience, according to a copy of the dismissal email seen by The Times. They were also told that they would receive more information about severance in a week, and they had not gotten separation agreements, former employees said. They said they gleaned that severance would probably be less than what Twitter’s previous management would have paid.