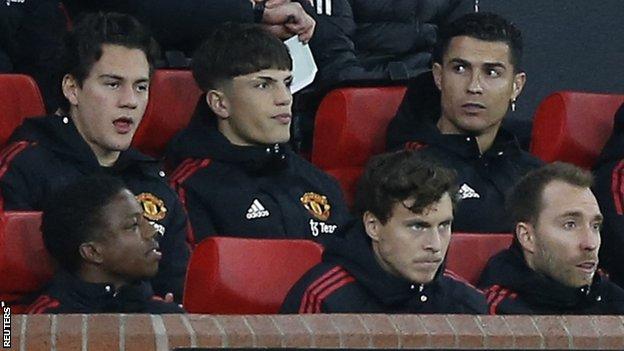 Ronaldo (top right) has only started two of Manchester United's 12 Premier League matches this season, completing only one full game in the 4-0 defeat at Brentford in August

Manchester United manager Erik ten Hag says he will "deal with" Cristiano Ronaldo after the unused substitute walked down the tunnel minutes before the end of the win over Tottenham.

"I will deal with that tomorrow, not today. We are now celebrating this victory," said Ten Hag.

"I have seen him, but I haven't spoken with him."

Despite United having only made three of their five permitted substitutions in Wednesday's 2-0 home win, Ronaldo decided to leave the bench early and disappeared down the Old Trafford tunnel.

It came three days after he showed his displeasure at being substituted against Newcastle.

After Sunday's 0-0 draw Ten Hag said he had "no problem" with Ronaldo's negative reaction, but added the Portuguese must convince him "he has to stay on".

"I'm sorry, that is unacceptable - it is so poor," Lineker said on Wednesday's Match of the Day.

"It was a great night for Manchester United and here we are again talking about Cristiano Ronaldo - even though he didn't play," said ex-Wales captain Williams.

Former England defender Richards said: "For one of the greats of the game to do that when your team are winning, making it about him, is disappointing."

Speaking to BBC Radio 4, Richards said Ronaldo's behaviour was "disrespectful" and the player should be allowed to leave in the January transfer window.

"His manager had problems with him at the start of the season, during pre-season, and to then carry this on - I just think there is only one way this needs to go now," Richards added.

"They need to come to an agreement in January and they need to let him go. There's always a way back in football but he is undermining the manager there, so I think it's best if they just part ways."

"It's the first time I can say that I am disappointed with him. Normally I back him, I understand his situation," Schmeichel said.

"We are in transition. Manchester United are now five managers down the road since Alex Ferguson," he added. "We have got Erik ten Hag in now who has very clear ideas about the way he wants to play football. We need understanding and time from everyone.

"We don't need distractions like that, and that's a disappointment, I would say."

'Pouting' Ronaldo must not overshadow emphatic display by Red DevilsAll the latest Manchester United news, analysis and fan views in one placeYou can now get Man Utd news notifications in the BBC Sport app - find out morePodcast: The Devils' Advocate - listen to the latest episode on BBC Sounds

'Disrespectful' & 'sums his attitude up' - your thoughts on Ronaldo's early exit

Ed: Disrespectful of Ronaldo to walk down the tunnel early rather than waiting to congratulate his team-mates on the pitch. Being a great doesn't stop at scoring goals.

Manny: Ronaldo walking down the tunnel instead of staying to celebrate the win with his team-mates pretty much sums his attitude up. Donny van de Beek had it a lot worse for two whole seasons and stayed more professional than the "most professional player in the game".

Dr Che: Ronaldo's recent antics betray his widely acclaimed professionalism. He needs to be reminded that he is almost 38.

Mike Greenwood: Poor from Ronaldo, he's separating himself completely from the current squad. He'll always be a legend at Old Trafford but he needs dropping from the squad as he's now doing more harm than good.