Demolition deadline about to pass for Cairo’s historic houseboats

In their more glamorous days, they played host to some of the city’s most important political and cultural chapters.

But that is coming to an end, as authorities move to demolish or tow away what remains of these relics, and residents scurry to pack their belongings.

The owners have been told that Monday is the last day they will be able to take their belongings, before the authorities move in.

Some still refuse to leave the only places they have called home, while others have already seen their houseboats destroyed or taken away.

Ebtessam Amin Afifi, 78, is one of them; her home was towed away late last month. She is now staying temporarily at her sister’s house, but has not given up.

“They took my boat, I was informed only two days prior. I couldn’t get my things out. Now, they have my boat. I am a citizen with rights, and this will not be the end of it. I am going to court,” said Afifi by phone, imploring Egypt’s President Abdel Fattah el-Sisi to back boat owners against what she described as a “miscarriage of justice”. 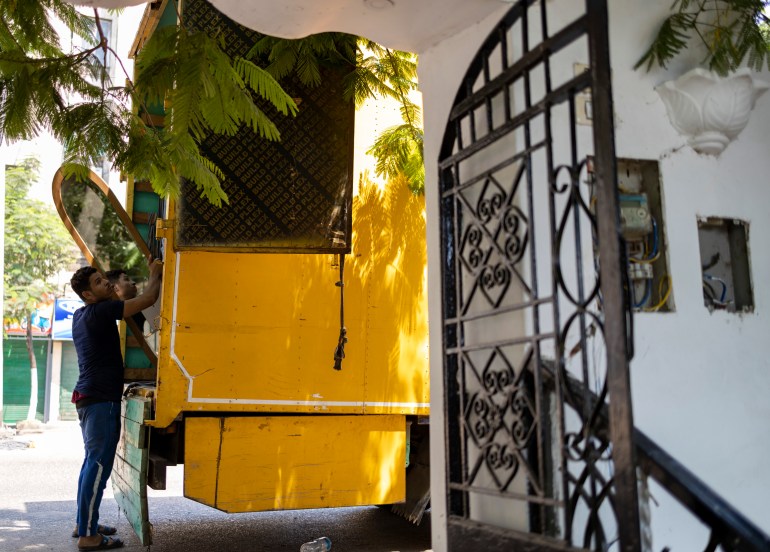 “They want to remove us and replace our homes with cafes and restaurants to generate profits, but this is my home – my investment,” Afifi added. “I was offered millions for this boat, and I didn’t let go of it. I poured all my savings into it.”

In recent years, Cairo’s neighbourhoods have witnessed sweeping makeovers as the government embarks on infrastructure and development projects. Countless bridges, highways, museums and even a new capital city have been constructed, affecting citizens along the way, and uprooting distinct features of one of the oldest cities of Africa and the Middle East.

Trouble on the Nile

Docked along a 2km stretch of the Nile’s western bank and nestled between the bustling 15 May and Imbaba Bridges, 32 wooden floating homes were – for decades – all that remained of dozens more that once adorned Cairo’s landscape.

A symbol of Egyptian culture during the 20th century, the Nile houseboats were one of the first breeding grounds for the Egyptian modern intellectual movement, with renowned directors, actors, entertainers, and writers owning or living on one at one point in their lives, and cultural and political salons being frequently hosted on their decks.

The houseboats were even depicted in immortal works such as The Cairo Trilogy and Adrift on the Nile, written by the late novelist and Nobel laureate Naguib Mahfouz, which shined a light on the more liberal lifestyle embraced within the secluded walls of the lodgings.

The place the houseboats therefore occupy in the Egyptian memory has meant that people have voiced their disapproval of the government’s decision, citing it as another erasure of one of Cairo’s landmarks and heritage to make room for new developments that are often inspired by the modern cities of the Gulf.

In the past few weeks, demolitions began, with homeowners receiving removal orders with only a 10-day notice to sort out their affairs.

The authorities say the evictions and demolitions are a necessity.

“A presidential directive was issued in 2020 prohibiting all residential houseboats on the Nile,” Ayman Anwar, the head of the Central Administration for the Protection of the River Nile, said in comments to Egyptian television.

Anwar said the houseboats were unlicensed, unsanitary and unsafe, and that some are used for non-residential purposes. While he has also said that acquiring a commercial or tourist licence could give a houseboat a second life, residents have complained they were denied permission when they applied for it. 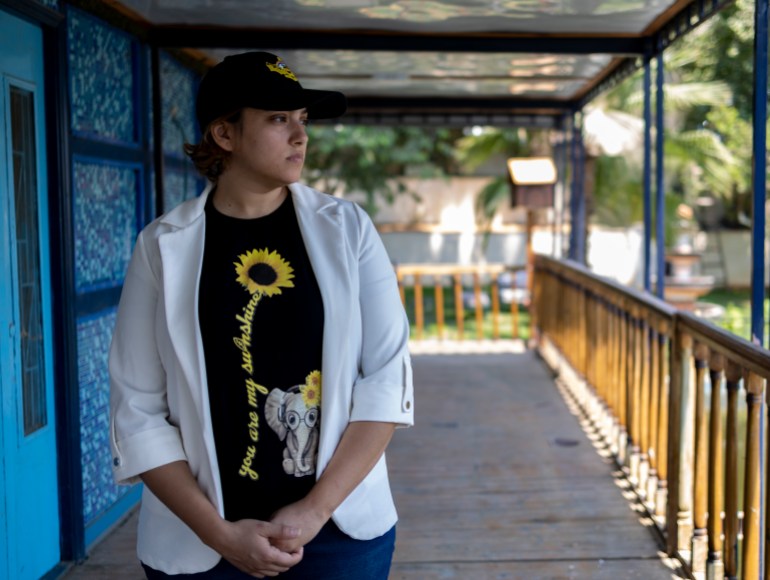 Manar al-Hagrassy refuses to leave her houseboat, where she raises four children, as she is adamant that she will challenge the government’s eviction order [Toka Omar/Al Jazeera]

At 35, Manar al-Hagrassy is one of the younger houseboat owners, but is just as attached to her home, and says she has tried to follow the government’s rules, but has not been able to get the license she needs.

“The last time we renewed our licences was in 2020. We’ve been repeatedly told since that the governor [of Cairo] has put a hold on all renewals,” said the mother of one, who also looks after her brother’s three children.

Al-Hagrassy has refused to leave despite having her electricity and water connection cut off for days, and claimed that she has been fined 420,000 Egyptian pounds ($22,300) for not having the appropriate licence.

“What’s happening right now is not legal and will not encourage foreign investments … All Egyptians are against the demolition of Nile houseboats,” al-Hagrassy said. “I won’t leave.” 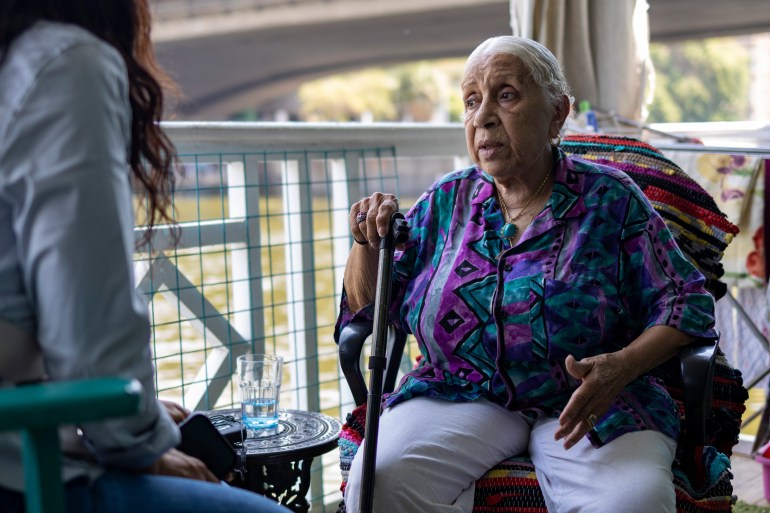 Ekhlas Helmy says she will not go either.

The 88-year-old widow was born and raised on a houseboat, only briefly leaving when she got married, before quickly returning, as she “could not bear a life away from the Nile”.

“I can’t believe this is happening,” Helmy said, with tears in her eyes. “I am an old woman, and this situation is too much for me. It’s breaking my heart.”

Helmy, who turned her turquoise-painted houseboat into a home for all sorts of pets and animals, has become a symbol of the houseboat evictions, eventually attracting the attention of el-Sisi himself.

But she has not been able to change his mind.

“Respect is due to every Egyptian, especially if they are a woman, and elderly,” el-Sisi said on Sunday. “But there is something crucial that we’re doing, which is to restructure the state … there are roads which when we build, we remove … 3,000 to 4,000 housing units … we compensate those affected by giving them decent compensation, or a substitute.”

“In short, and not to personalise the matter and turn it into an issue: will she be subjected to injustice, or left without being considered? No. Neither will happen.”

She is now being helped by her brothers, neighbours, and just common people sympathising with her plight, to collect her belongings. But she is still not ready to leave.

“If I ever leave my boat, I will die,” Helmy said. “I can’t live anywhere else.”

This article was published in collaboration with Egab.