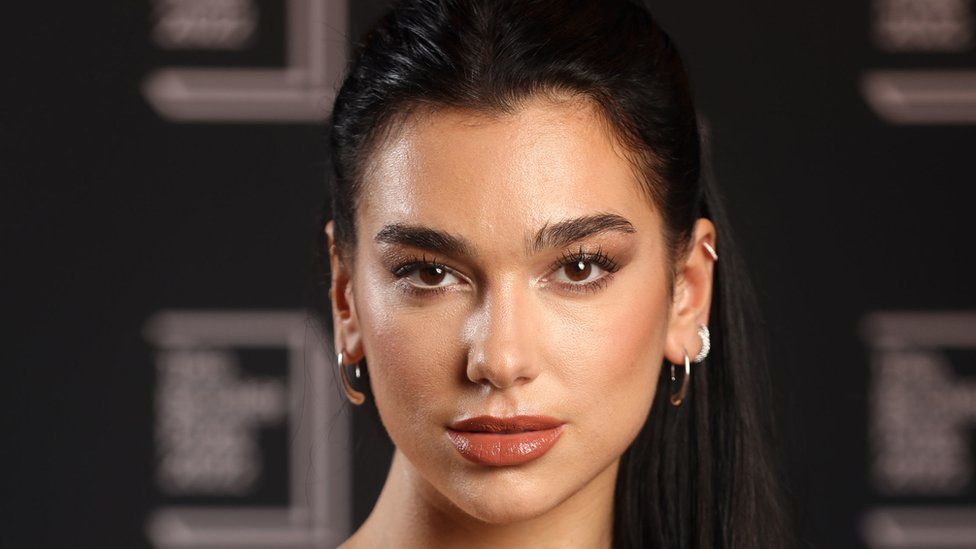 Dua Lipa has had number one hits with songs like New Rules, One Kiss and Cold Heart

Dua Lipa has denied reports she will perform at the Fifa World Cup opening ceremony in Qatar.

The singer said she will "look forward to visiting Qatar when it has fulfilled all the human rights pledges it made" when it became host.

Qatar has been criticised for its stance on same-sex relationships, its human rights record and its treatment of migrant workers.

Other acts including Robbie Williams and BTS's Jung Kook are set to perform.

Lipa posted an Instagram story on Sunday, which read: "There is currently a lot of speculation that I will be performing at the opening ceremony of the World Cup in Qatar.

"I will not be performing and nor have I ever been involved in any negotiation to perform.

"I will be cheering England on from afar... One love, Dua."

Watch: Ros Atkins on… How Qatar got to host the World Cup

Lipa, born in London to Kosovar-Albanian parents, is not the first major name to make a point of not playing in Qatar.

Sir Rod Stewart recently revealed he turned down the opportunity.

"I was actually offered a lot of money, over $1m, to play there 15 months ago. I turned it down. It's not right to go," he told the Sunday Times.

He added: "And the Iranians should be out too for supplying arms", in reference to Iran's supply of explosive drones to Russia, which Iran has denied.

Russia was suspended from all competitions by Fifa and Uefa in February, after the country's invasion of Ukraine.

US pop group Black Eyed Peas and Colombian singer J Balvin, however, are set to perform at events in Qatar during the tournament.

Lycett has promised to donate £10,000 of his own money to charity, if the former footballer ends his reported multimillion-pound deal with Qatar.

Homosexuality is illegal in the country, where same-sex relationships can be punishable by the death sentence.

If the former footballer refuses, then Lycett has threatened to shred the £10,000 - just before the World Cup opening ceremony.

Lycett says Beckham's "status as a gay icon" will also be shredded if he doesn't end his relationship with Qatar.

The BBC has contacted David Beckham for comment, and his management responded: "We aren't commenting at this time."

Beckham has been urged to speak out on the criminalisation of same-sex relations in Qatar.

Speaking to the BBC last year, a source close to Beckham said: "Of course David wanted to ensure that he was informed about the facts and any concerns that he might have for his gay friends, football supporters and fans.

"Some of the laws and beliefs in the region differ to his own but the Qataris have always said that everyone will be safe and welcome at the World Cup in 2022 and he believes that commitment is sincere and has seen evidence of proactive engagement with the international LBGTQ community by the World Cup organisers."

Qatar World Cup ambassador Khalid Salman made headlines last week after it emerged he had referred to homosexuality as "damage in the mind".

Rasha Younes, LGBT rights senior researcher at Human Rights Watch, said: "The failure of the Qatari government to counter this false information has a significant impact on the lives of LGBT residents of Qatar, ranging from fuelling discrimination and violence against them to justifying subjecting them to state-sponsored conversion practices."

Organisers have said no-one coming to watch the tournament will be discriminated against.

'Not a very good defence'

Beckham's former England and Manchester United teammate Gary Neville recently appeared as a guest presenter of Have I Got News For You, and was questioned by team captain Ian Hislop over his decision to travel to Qatar to commentate on the World Cup.

"My view always has been that you either highlight the issues and challenges in these countries and speak about them, or you don't say anything and you stay back home and don't go," said Neville "I've always said we should challenge them."

To which Hislop replied: "There's another option - you stay at home and highlight the abuses.

"You don't have to go and take the Qataris' money. I'm not trying to be tiresome, but it is just not a very good defence."