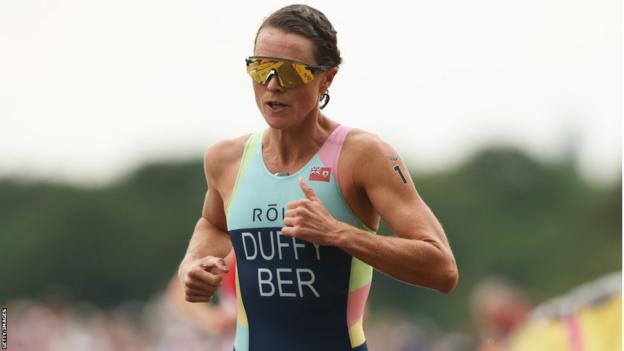 Duffy is one of the legends of the sport

Bermuda's Flora Duffy got the better of Britain's Georgia Taylor-Brown in the Abu Dhabi heat to win a record fourth World Triathlon title.

The win also gave the 35-year-old Olympic and Commonwealth champion victory in the Championship series.

Duffy moved clear of the Briton midway through the 10km run and quickly pulled away with Taylor-Brown unable to respond.

She clocked one hour 53 minutes and 24 seconds; Taylor-Brown 64 seconds back.

Duffy and Taylor-Brown had been well-placed in the leading group throughout the swim and bike sections.

A four-strong group came into the final transition together and it was Taylor-Brown who emerged first and started the run strongly, building up an early lead over Duffy.

But Duffy was patient and gradually closed the gap before taking over at the head of the field to finish her year on a high.