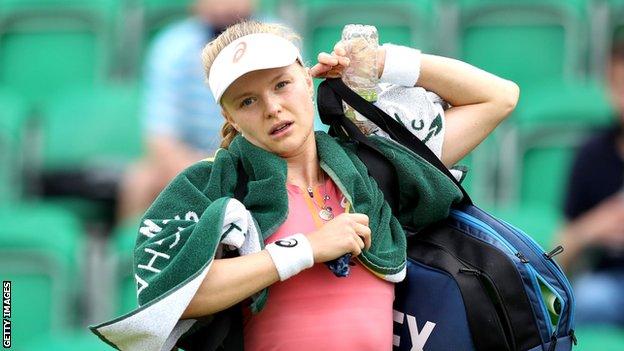 Harriet Dart reached the Eastbourne International second round in 2018

Britain's Harriet Dart lost to French Open quarter-finalist Elena Rybakina in the first round at Eastbourne despite a spirited fightback.

Rybakina, 22, who had looked to be struggling with a foot problem, rallied to break Dart twice in the decider.

Meanwhile, defending champion Karolina Pliskova was knocked out of the event where play was washed out on Monday.

The Czech fifth seed started well against Italian qualifier Camila Giorgi but lost 2-6 6-2 6-2, which means the 29-year-old heads into next week's Wimbledon without a win on the grass.

The 26-year-old Ukrainian has never been past the second round at Eastbourne.