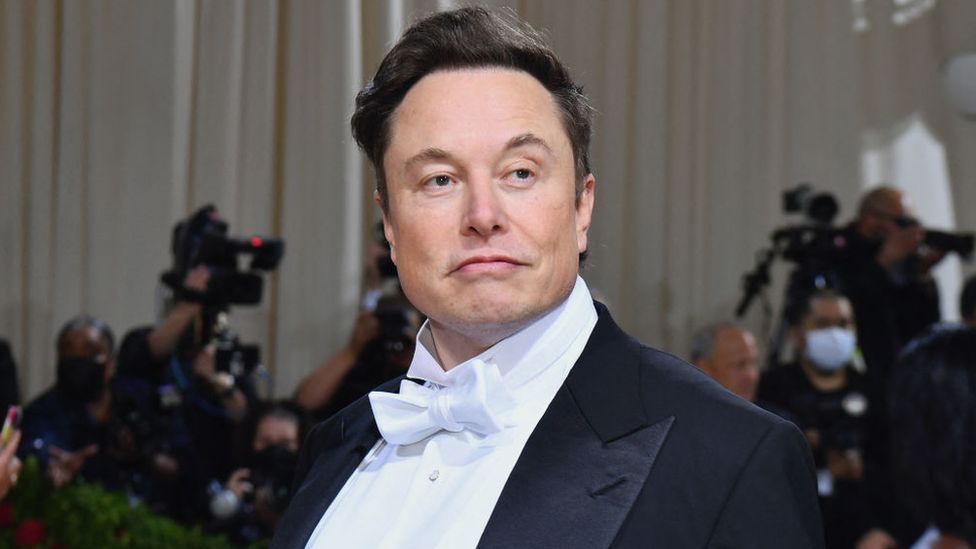 Elon Musk was responding to Chris Heaton-Harris on Twitter

Twitter's billionaire owner Elon Musk has responded to the Northern Ireland secretary of state after he called for fake news to be eliminated from the platform.

The exchange came after Chris Heaton-Harris rubbished rumours of his resignation after a fake email was circulated.

The world's richest man replied, asking: "What does a tosh look like?"

He then replied to Mr Musk on Twitter, joking that he had been referring to "and/or the content of my speeches".

Coming hours after Mr Heaton-Harris extended the deadline for calling a fresh Stormont election, it contained a fake quote saying the NI Secretary had resigned for "personal reasons".

On Thursday morning Mr Heaton-Harris said he thought an email system had been hacked, joking: "I thought it was my mum."

The Police Service of Northern Ireland (PSNI) said the email has not been reported to them and they were not looking into it.

BBC News NI has contacted the NIO for comment.

Mr Musk has vowed to clamp down on Twitter accounts impersonating other people.

"Any Twitter handles engaging in impersonation without clearly specifying 'parody' will be permanently suspended," he tweeted.

Wider concerns have been raised about the spread of misinformation on the platform after Mr Musk's $44bn (£38.3bn) deal to take over Twitter in October.

Mr Musk has previously described himself as a "free speech absolutist" and has signalled he is willing to reverse the bans of controversial users, including Donald Trump.

He has announced half of Twitter's staff were being let go, a week after he bought the company in a $44bn (£38.7bn) deal.

Mr Musk said he had "no choice" over the cuts as the company was losing $4m (£3.51m) a day. He has blamed "activist groups pressuring advertisers" for a "massive drop in revenue".

The cuts - as well as Mr Musk's fierce advocacy of free speech - have led to speculation that Twitter could water down its efforts on content moderation.

While the tech magnate has ambitions to allow Twitter to become a virtual "town square" where users can exchange robust views, he has stressed, to advertisers in particular, that the platform's moderation policy has not changed yet.