1 month ago 36
'It's still sinking in!' - Raducanu talks to BBC Breakfast about the 'whirlwind' experience of winning the US Open

US Open champion Emma Raducanu says it felt like somebody else was playing as she watched Saturday's final for the first time on returning home.

The 18-year-old celebrated the historic win in New York before arriving back in London on Thursday.

Speaking to BBC Breakfast she says being the first British woman in 44 years to win a Grand Slam singles title is "gradually sinking in".

"I watched the final and tried to remember how it felt," she adds.

"It's still such a whirlwind of an experience. I've loved every moment of it but it is something that is difficult to comprehend.

"When I was watching it [the final] it almost feels like that's not me whose playing and pulling off some of those shots.

"I was really proud of how I came through some tough moments."

Raducanu 'hungry' to improveRaducanu on resilience, celebrations and pleasing her parentsListen to The Sports Desk: Raducanu and the year of the teenager

The straight-sets victory against Leylah Fernandez made Raducanu the first qualifier to win a Grand Slam and raised her to world number 23 and British number one.

Despite the amount at stake, the teenager says she "didn't feel any stress" when stepping out in front of a packed Arthur Ashe stadium.

"I was just having a lot of fun out there," she explains.

"That's what helped because I wasn't thinking at all about anything that was out of my control or that was going on off the court.

"I think that's the key that helped me have the run I had because I wasn't distracted, I was just focussing on what I had to do and I executed."

After captivating the New York crowd, Raducanu was invited to celebrate at various events across the city.

But immediately after the win, she took time to reflect with her team as they headed back to their hotel on "a sort of party bus".

"There was a lot of music and we were all just singing along," says Raducanu, adding that Neil Diamond's Sweet Caroline and The Killers' Mr Brightside were two songs of choice.

"Then we had a really nice night just talking until early in the morning, reflecting on the whole experience and what an amazing time it's been."

Sandwiched between appearances on prime-time American breakfast television and a visit to the Stock Exchange, Raducanu was invited to the star-studded Met Gala.

"At the Met Gala I spoke to Lewis Hamilton, which was really cool being such a fan of motorsports and Formula 1," she adds.

"It was really nice to speak to him there, and everyone else." 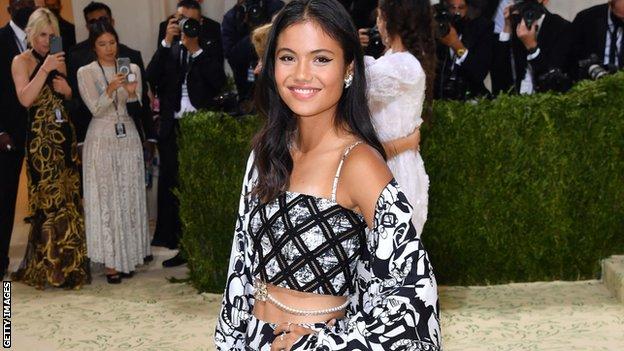 Raducanu attended the Met Gala in New York on Monday

Now that she is home, Raducanu's feet are firmly on the ground again and the highlight of her first night back was "some really good homemade dumplings" provided by her mum.

She credits her parents' "tough love" with giving her the mental strength to claim a first major title so young.

"They just gave me a hug when I came back. Nothing crazy, no big celebration. They are just staying discreet and some reassurance in saying they're proud of me is enough," she says.

As for the £1.8m prize money earned in the US Open win, Raducanu adds: "I will just leave that to my parents and my team.

"I'm just focussing on what I love to do which is competing and they can take care of that for me."

What next for Raducanu?

Raducanu is staying humble in victory, telling BBC Radio 2 she is simply glad her ranking is now high enough to "play the biggest tournaments" and "compete with the very best".

She could receive a wildcard to appear at Indian Wells in California, which begins on 7 October, and the season-ending WTA Finals take place in Guadalajara, Mexico in November.

The eight players with the highest points tally this year will qualify for that tournament and Raducanu has risen to 14th in the race.

"I haven't actually discussed my tournament schedule yet," she says.

"Because of the change in my ranking the tournament options change slightly. I need to discuss and sit down and see what's next for me.

"I've had a very long and intense seven weeks. I really need some time to rest and recover because it's been very demanding physically and emotionally to withstand seven weeks on the road.

"I really need to recover, rejuvenate and next time I'll be ready to go to whichever tournament I choose."

Perhaps most exciting for British tennis fans is the prospect of seeing Raducanu at Wimbledon in June 2022. She was forced to withdraw from the fourth round of this year's tournament with breathing difficulties.

But if she has not yet decided her next tournament, the teenager definitely will not be drawn into discussions of any possible success at the All England Club.

When asked how 'Henman Hill' should be renamed during her matches, Raducanu says: "I think that one should stay with Tim Henman.

"He's a great inspiration and he's helped me so much. I'm obviously looking forward to Wimbledon but it's still some time away and I've still got so much learning to do."

Alerts: Get tennis news sent to your phone