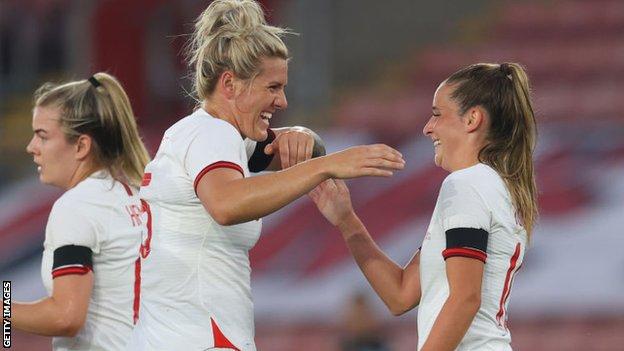 Playing in front of more than 8,000 fans at St Mary's Stadium, England put on a show to mark a new era.

Beth Mead capped off a brilliant display with a goal and there were also two own goals from the visitors.

How one-sided victory unfoldedEngland to host new tournament in 2022

It was a dominant performance by England, who easily could have scored double figures in what felt like 90 minutes of attacking onslaught, delivering 46 shots on goal.

Huge chances were missed by White, Lauren Hemp, Nikita Parris, Beth Mead and Toone, while Jill Scott hit the crossbar in the second half.

The Lionesses were never tested defensively and simply had too much quality for North Macedonia, ranked 131st in the world.

Northern Ireland marked their opening qualifying match with a 4-0 victory over Luxembourg, who are England's next opponents on Tuesday, 21 September (19:15 BST). 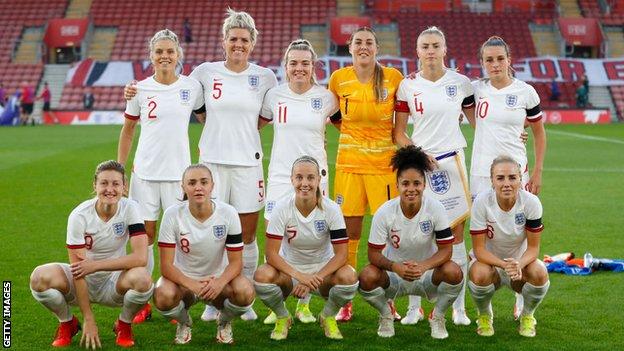 Wiegman said she wanted "lots of goals" from her side earlier this week, knowing they would dominate possession against a lower-ranked opposition.

While difficult to gauge their true level against North Macedonia, who are ranked 123 places below England in the world, a clean sheet, an attack-minded performance and a comfortable victory means they ticked all the boxes in Wiegman's first game.

And it should have been a bigger victory.

It was a sign of England's dominance that they went into the half-time break with a 3-0 lead feeling underwhelmed.

There were several missed opportunities in the first half in particular - with goalscorer White admitting she was "disappointed" not to have scored more.

But ultimately it was a hugely promising performance from England, who have lacked creativity and cohesion over the last two years.

The young midfield trio of Leah Williamson - captaining the side for the first time - Toone and Georgia Stanway impressed, while Mead's bright start to the season with Arsenal continued.

More ruthlessness will no doubt be called for by Wiegman but it was the perfect way to start her England career.

Attempt saved. Beth Mead (England) right footed shot from outside the box is saved in the centre of the goal. Assisted by Leah Williamson.

Attempt missed. Nikita Parris (England) left footed shot from the centre of the box is close, but misses to the left. Assisted by Lotte Wubben-Moy.

Attempt missed. Jill Scott (England) header from the centre of the box is just a bit too high. Assisted by Ella Toone with a cross.

Attempt blocked. Bethany England (England) header from the left side of the six yard box is blocked. Assisted by Nikita Parris.

Attempt saved. Nikita Parris (England) right footed shot from the right side of the box is saved in the bottom left corner. Assisted by Bethany England.