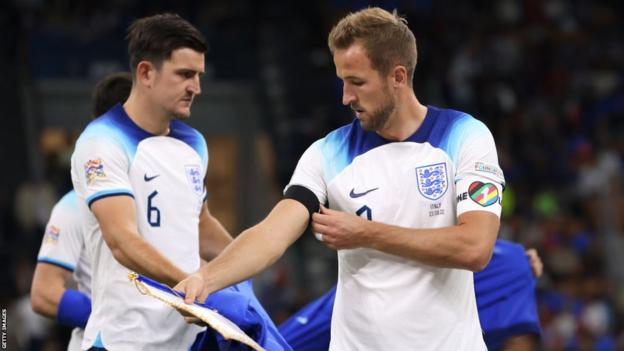 England, Wales and other European nations are in talks over whether to proceed with their plans for their captains to wear a OneLove armband at the World Cup in Qatar.

The captains of nine nations, including England's Harry Kane and Gareth Bale of Wales, had planned to wear the armband to promote diversity and inclusion.

But they have been warned by Fifa officials that wearing the armband would be a breach of its rules and risk a "sporting sanction" for captains, such as a booking.

With England due to kick off their World Cup campaign against Iran at 13:00 GMT on Monday, it remains unclear whether the Football Association (FA) will drop its plans for Kane to wear the armband.

Why is the Qatar 2022 World Cup controversial?

This week, chief executive Mark Bullingham told BBC Sport that the FA was willing to take a fine, but the feeling within the governing body is that the prospect of a booking and suspension has put players in an impossible position.

On Saturday, Fifa launched its own armband initiative in partnership with three United Nations agencies.

The armbands will feature a different social campaign throughout each round, including #NoDiscrimination, #SaveThePlanet, #ProtectChildren, #EducationForAll and #BeActive.

The Netherlands began the OneLove campaign before Euro 2020 as a message against discrimination.

On Saturday, Fifa president Gianni Infantino accused the West of "hypocrisy" in its reporting about Qatar's human rights record.