England boss Gareth Southgate said his side are "regaining our respectability on the world stage" as they aim to clinch a last-16 World Cup place.

The Three Lions will secure a spot in the top two of Group B if they beat the United States on Friday (19:00 GMT).

It would be England's fourth successive appearance in the knockout phase of a major tournament since going out in the group stages of the 2014 World Cup.

"This is a good period for English football," said Southgate on Thursday.

"At junior level, at senior level, with our women's team, there's lots of positive things going on.

"We feel we can be competitive for many years to come and that's the aim - to have a sustained challenge in the later stages of the big competitions and we've not done that for years and years.

"These players are putting the country on the map and regaining our respectability on the world stage - we need to keep doing that."

Kane fit to play USA - SouthgateWho could be England's Plan B if they do not risk Kane?

In the 2014 World Cup, England lost both of their first two matches and finished bottom of their group.

England thrashed Iran 6-2 on Monday but face a tougher task against a United States side ranked 16th in the world and who began with a 1-1 draw versus Wales.

"If we win we qualify and the first objective is to qualify from the group," added Southgate. "We have three matches to do so and if it takes all three we have to be ready for that.

"Have we ever beaten the States in a major tournament? No, so we have to try to make history. We're good at talking highly of ourselves as a nation with no evidence so we need to perform well.

"We will play a highly-motivated team and have huge respect for the opponents. We know their players and the quality and athleticism they have so we have to be at our best - I don't think we will be underestimating USA." 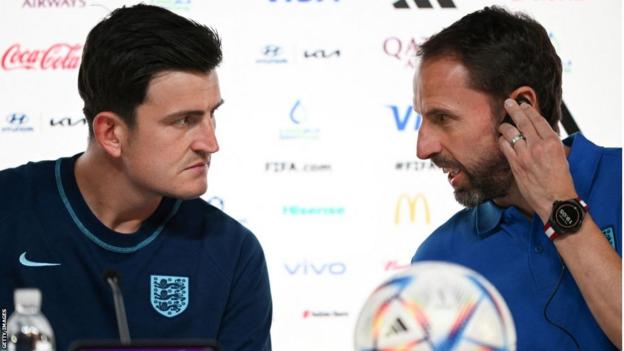 Southgate was joined at Thursday's news conference by defender Harry Maguire, who has received recent criticism but will gain his 50th international cap if he plays.

"I have great belief in myself, I work as hard as possible, I give my all and that gives you good preparation to perform to the best level," said Maguire.

"As a footballer nobody likes being criticised but it's part and parcel of the game. I've played with Cristiano Ronaldo for the last couple of years and he's one of the greatest players to kick a football.

There will be a strong Premier League contingent in the US side, with Chelsea's Christian Pulisic, Arsenal goalkeeper Matt Turner, Fulham pair Antonee Robinson and Tim Ream as well as Leeds' Brenden Aaronson and Tyler Adams in the squad.

United States manager Gregg Berhalter said: "I think Gareth's done a great job. His record at major tournaments has been outstanding - fourth place in 2018, second place at the Euros.

"They got off to a great start and they're a formidable opponent. It's going to be difficult for us."

Leicester midfielder James Maddison has not trained this week, but captain Harry Kane is fit to play after sustaining a minor ankle injury against Iran.

Maguire is also fit after feeling unwell in the second half on Sunday, while Kyle Walker could make his first appearance since groin surgery at the beginning of October.

The United States have not reported any injury concerns.

This is the third meeting between England and USA at the World Cup, with the United States winning 1-0 in 1950 before a 1-1 draw in 2010.In all competitions, England have won eight of their 11 meetings with USA (drew one, lost two). Their last defeat against them came in June 1993 (0-2), winning four and drawing one of their meetings since then.Following their 6-2 victory over Iran, England are looking to win their opening two games at the World Cup for a fourth time, also doing so in 1982, 2006 and 2018. England completed 716 passes in their 6-2 win over Iran, their most on record in a World Cup match since 1966. John Stones was responsible for 116 of those completed passes (16%), also the most by an England player in a World Cup game since 1966.
Read Entire Article