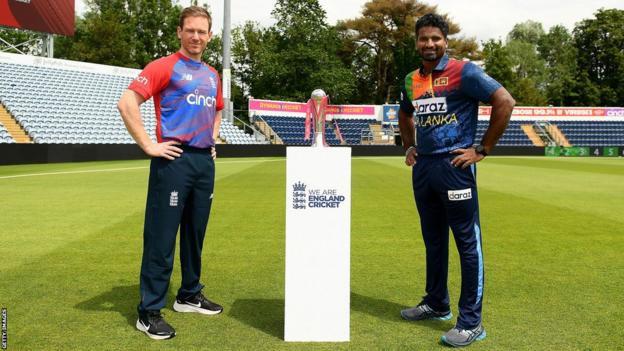 This summer represents a "huge chance" for England players to secure their places less than four months before the T20 World Cup, says captain Eoin Morgan.

England begin a three-match series against Sri Lanka in Cardiff on Wednesday, before three games against Pakistan starting on 16 July.

"It's important to try and get guys that we feel will play a part in the World Cup some form of cricket during the next four weeks," Morgan told BBC Sport.

"This series and the rest of the white-ball summer is a huge opportunity to stake our claim as a team and as individuals, both to be selected for the World Cup, but also the carrot of number one side in the world."

The top-ranked T20 side in the world, England are scheduled to play only five further T20s, in Bangladesh and Pakistan, before the T20 World Cup in Australia gets under way on 18 October.

They will play three T20s in four days against Sri Lanka, including back-to-back games at Sophia Gardens.

"You want guys to be on the money from the first game because there's no breathing space," said Morgan.

"It can come out at you quite quickly. We need to be on top of our game."

Will England be at full strength?

Unlike the England Test side, which has been missing key players this year because of rest and rotation, the T20 team has been close to full strength.

All-rounder Ben Stokes is not part of the squad after a broken finger, although he made his comeback for Durham in the T20 Blast on Sunday.

Jofra Archer continues his recovery from an elbow injury, while fellow pace bowler Reece Topley is absent with a side strain.

Opener Jonny Bairstow, who sustained an ankle injury playing for Yorkshire on 16 June, has been passed fit to play, while Dawid Malan is also available despite missing Yorkshire's T20 Blast win over Derbyshire on Sunday with Achilles trouble.

All-rounder Chris Woakes is in contention play his first T20 since 2015, while left-arm seamer David Willey - another member of the 16-man squad - has not played since 2019.

Sue Redfern will become the first female umpire to officiate a home England men's match in the first T20.

The 43-year-old, who played six Tests and 15 ODIs for England between 1995 and 1999, replaces Alex Wharf as fourth umpire because the World Test Championship final between India and New Zealand will go into a reserve day on Wednesday.

Redfern was an on-field umpire for England women's drawn Test against India at Bristol that ended on Saturday.