Ethiopians set to vote in crunch polls amid conflict and apathy

After some consideration, Shimelis Yohannes* decided to register to vote in Ethiopia’s delayed general elections due to be held on Monday.

“I took a vote card because it’s better than sitting out the election,” said the civil servant in the capital, Addis Ababa. But, he adds quickly, he has no illusions over a vote that has been overshadowed by conflict in the northern region of Tigray, instability elsewhere and widespread apathy.

“I don’t think my vote will change anything or decide the future direction of Ethiopia, but at least I can tell myself I tried my best,” says Yohannes, who will back an opposition party.

While he is among the 38 million people who have registered to cast ballots in the national and regional parliamentary polls, Bruk Gemechu*, who lives in Shashemene city, some 250 kilometres (155 miles) southeast of Addis Ababa, says he will abstain.

The private sector professional says his region of Oromia, Ethiopia’s largest, has no credible opposition parties to compete with Prime Minister Abiy Ahmed’s Prosperity Party (PP) after the two most popular ethnic Oromo political parties – the Oromo Liberation Front (OLF) and the Oromo Federalist Congress (OFC) – decided to boycott the polls. The parties allege that the elections lack legitimacy, citing an inability to compete while high-profile leaders and party members are behind bars and other members are subjected to physical violence.

“The local PP cadres had been coercing the vulnerable sections of the society to take out voter registration cards and nowadays are threatening them with punishment if they vote for the few candidates of other opposition parties,” alleged Gemechu. 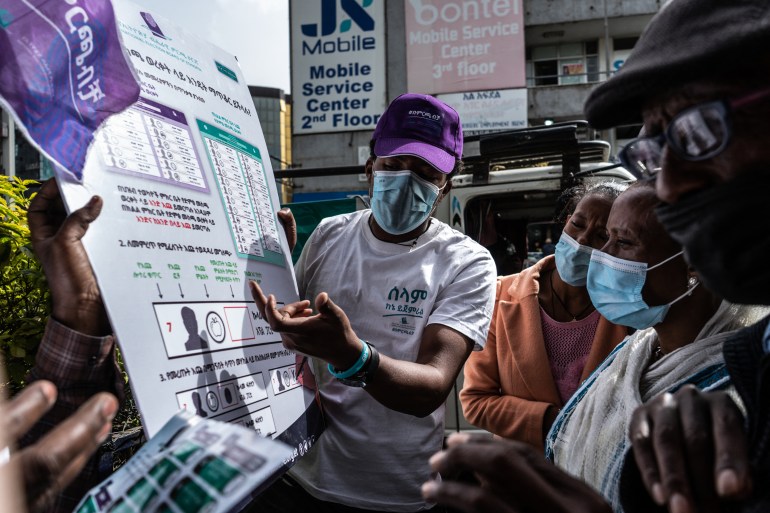 Staff members of the National Electoral Board explain to people how to vote for the upcoming elections [Amanuel Sileshi/AFP]The youth from Ethiopia’s largest ethnic group Oromos, who make up about 35 percent of the country’s estimated 110-plus million people, were at the forefront of two-and-half years of anti-government protests that brought Abiy to power in April 2018.

However, Abiy has since fallen out with many of the leaders of the Oromo youth movement. Several leading OFC members, including Jawar Mohammed and Bekele Gerba, remain behind bars on terror charges in connection with the unrest that followed last year’s murder of popular Oromo musician and activist, Hachalu Hundessa.

The PP, however, insists that the elections will be free and fair – a historical first in Ethiopia. Monday’s polls will be the sixth since the overthrow of Mengistu Haile Mariam’s communist government in 1991. The previous five contests – all won by the now-disbanded Ethiopian People’s Revolutionary Democratic Front four-party alliance – were marred by accusations of fraud and irregularities.

“The ruling party is extremely ready to exercise democracy … and the public is very much eager,” says the PP’s Bikila Wolde. “Even though these opportunities are there, the challenges are also very clear, because Ethiopia has an extremely polarised political system for a very long time, known for dictatorial regimes. Modern and civilised political exercises are scarce in this country.”

While the ruling party is touting the vote – originally scheduled for 2020 but first postponed due to the coronavirus pandemic and then over logistical challenges – as an opportunity to lessen the temperature of the polarised political environment, some fear it may have the opposite effect.

An analyst in Addis Ababa, who did not want to be named citing the charged political atmosphere, says the polls will happen amid rising COVID-19 cases and locust invasions, as well as “an economy that is in tatters and conflict in Tigray region which has left the region fully humanitarian-aid dependent”.

The seven-month war in Tigray is estimated to have killed thousands of people, if not more, and displaced some two million, with the United Nations warning this week that 350,000 are suffering famine conditions.

“The Ethiopian military which was supposed to be tasked with transporting electoral materials is tied up in the Tigray conflict as well as in fighting simmering insurgencies in various parts of Oromia and Benishangul-Gumuz regional states,” the analyst said. “I see it as inconceivable PP gaining electoral legitimacy from the polls at this moment.”

Acknowledging the security and logistical challenges facing various parts of Ethiopia, the National Electoral Board of Ethiopia (NEBE) disclosed earlier this month that voting will not take place in nearly one-fifth of Ethiopia’s 547 polls constituencies.

NEBE has said voting in the constituencies not participating next week will go ahead on September 6, but Tigray – with 38 seats – is indefinitely excluded for now.

“I see only one constituency that’s represented in the polls; that is the urban elites and the Amhara region,” the analyst said.

While the PP is the frontrunner to win a majority of seats, it is expected to face a serious electoral challenge in Addis Ababa and the Amhara region, Ethiopia’s second-most populous.

Already, several opposition figures have publicly disclosed their acceptance of results is conditional on the vote count being fair.

In 2005, a police crackdown on unarmed protesters who took to the streets of Addis Ababa to decry election irregularities left nearly 200 demonstrators dead, as well as six police officers.

Both Yohannes and the analyst shared concerns over potential post-election violence in the two areas seen as the most electorally competitive, but Abiy in his final campaign rally on Wednesday predicted that the polls will be peaceful.

“The whole world is saying we will fight but we will show them differently,” Abiy told supporters in the town of Jimma. “I say to all Ethiopians [engaged] in the struggle to ensure a peaceful, democratic and prosperous Ethiopia,” added the prime minister, who earlier in June had accused “traitors” and “outsiders” of working to undermine Ethiopia. 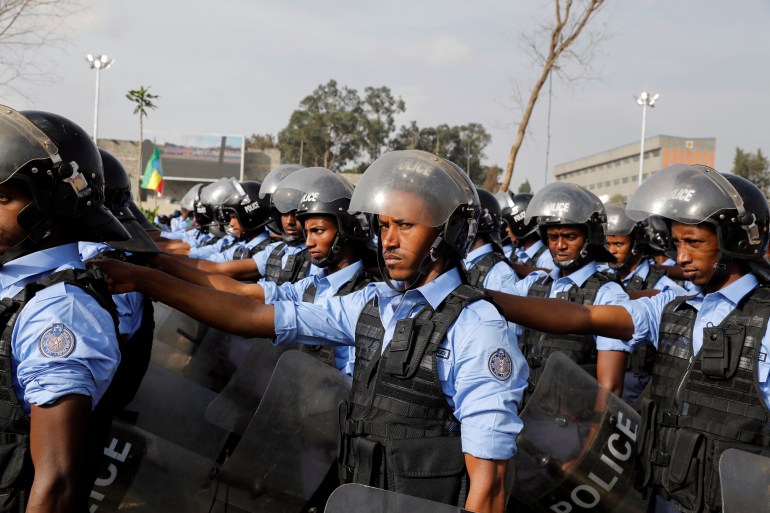 “I don’t see the election changing neither the deteriorating security environment not the increasing pressure from parts of the international community,” the analyst said.

“I see the military stalemate in the Tigray between rebels and the Ethiopian army – supported by Eritrean and neighbouring Amhara region forces – continuing for now while the humanitarian situation continues to deteriorate, and frustrated Oromo youths continuing to join the outlawed Oromo Liberation Army (OLA) rebel movement,” the analyst added.

“Fragmented sanctions from Western nations (in connection to the Tigray war) are likely to be increased, with the effects bound to first affect the lower economic class of the society before it reaches high-level government officials.”

*Name changed to protect their identity 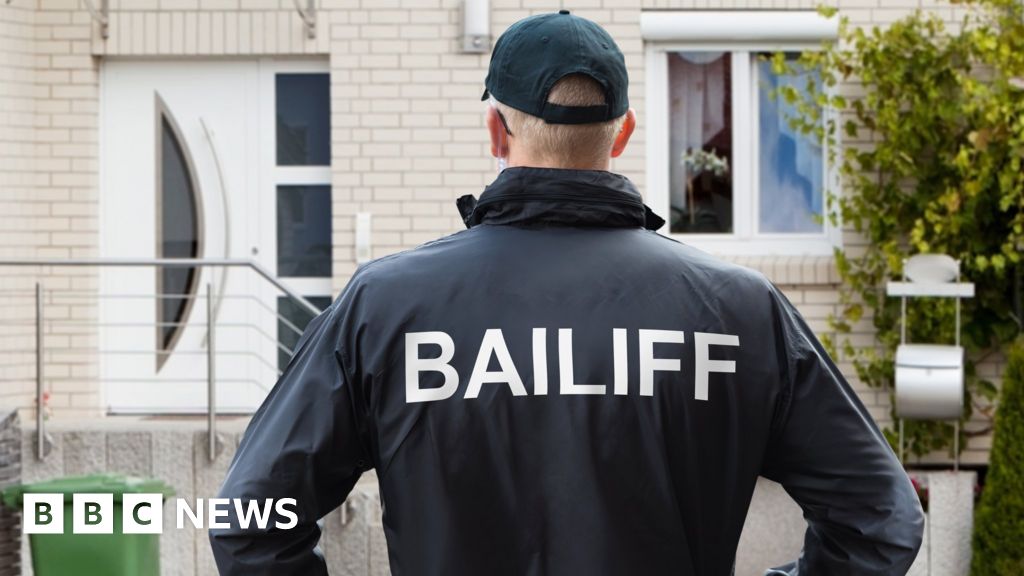 Bid for better bailiffs as pande... 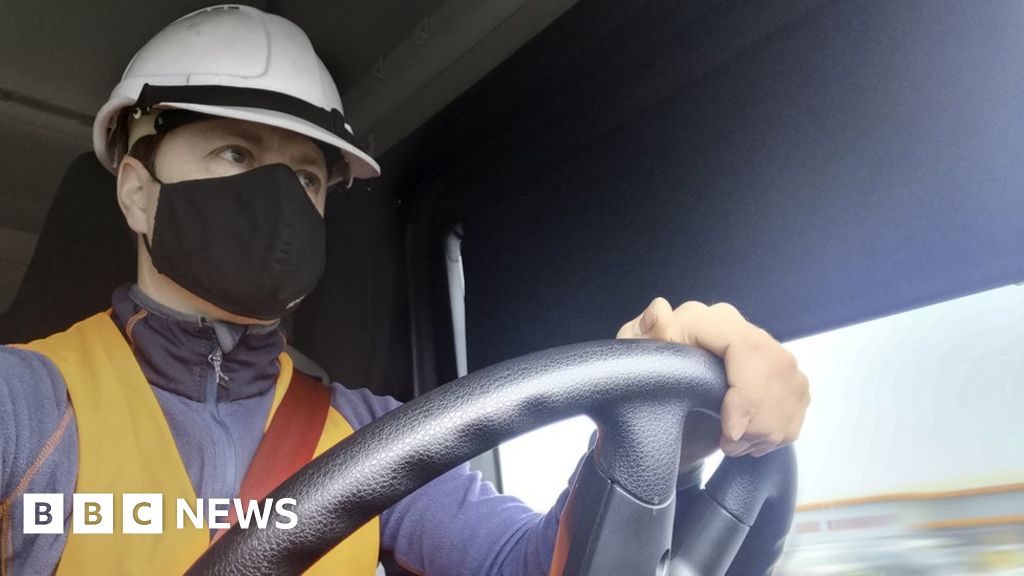 US Pentagon head calls for ‘cons...