Euro 2020: Are Spain missing a fear factor after another lacklustre draw?

Spain were once the dominant force in world football but now appear a shadow of their former selves after another limp display at Euro 2020 left them under serious pressure heading into their final group game.

Luis Enrique's side were held to a 1-1 draw by Poland on Saturday - their second in succession in Group E after a goalless draw with Sweden in their opener.

It means the three-time European champions face Slovakia next Wednesday knowing they need to win to guarantee qualification to the knockouts.

"We lack a bit of luck," Spain full-back Jordi Alba said. "We're doing things well and we are going to turn things around, I am convinced of that.

"Nobody can question our effort. People can blame us all they want but the intensity, the motivation that this team has is unquestionable."

While Spain's campaign is faltering, Poland's has sparked into life after their talismanic striker Robert Lewandowski got his first goal of the tournament in the 1-1 draw.

Once champions of the world, now lacking fear factor? 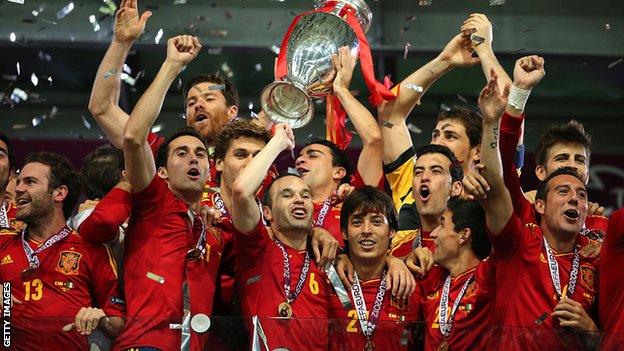 In the late 2000s and early 2010s Spain were the team be feared. They overwhelmed opponents with their stylish 'Tiki-taka' football as they won the European Championship in 2008 and 2012 and the World Cup in 2010.

Passing and possession still remains a dominant part of the game, having had 85% and 76% possession in their games against Sweden and Poland respectively.

But the problem they appear to face now is they have little idea of what to do with all that time on the ball and have few leaders on the pitch capable of lifting them in difficult moments.

"Carles Puyol, Sergio Busquets or Sergio Ramos give you fear, it will be a battlefield. This Spain team is full of technical talent, they know how to read the space and when to play but there is no fear anymore.

"When opponents come on to the field and don't see a Puyol or Ramos in the warm-up you think, 'You know what, we have a chance.'"

No striker and weak midfield?

Spain have had 29 shots on goal in their two games so far but have scored just the one goal - Alvaro Morata's close-range finish against Poland, which was given by VAR after initially being ruled out for offside.

Morata has received criticism for his performances, having missed two big chances against Sweden, but he is not alone in coming up short in the Spain attack. Gerard Moreno hit the post with his penalty against Poland, while Dani Olmo managed just one shot on goal before he was substituted in that game.

"I don't think it's as bad as people are saying like there are no major stars, they are just missing that striker who can just finish off them chances."

"It is the worst midfield I remember in Spain," he said.

Lewandowski to inspire Poland after goal? 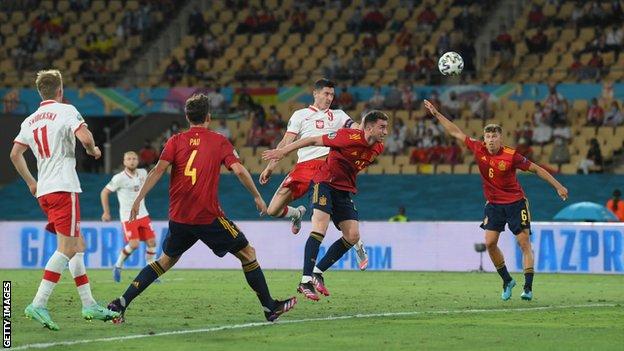 Robert Lewandowski became only the third player to score in three separate major tournaments (World Cup and Euros) for Poland, after Grzegorz Lato and Andrzej Szarmach.

Spain have plenty of time to turn things around, but progress is far from certain in a wide open Group E in which all four teams can still qualify.

Poland looked to be heading out after 45 minutes but kept their hopes alive with Lewandowski opening his tournament account.

The Bayern Munich striker has been in prolific form for club and country in recent years, with his 55 goals in 47 games in 2019-20 seeing him named the best men's player at the Best Fifa Football Awards in December last year.

But he has struggled at major competitions for his country, with Saturday's goal only his third in 13 tournament games.

It was, however, a classic Lewandowski strike - a thumping header from close range that no goalkeeper would have been able to stop - and it could now inspire him to add further goals and help send Poland into the last 16.

"This is a chance for him to really stamp himself in a tournament and I think that's something that's not on his CV at the moment. With him as the inspiration, I'll go with Poland to go through."

Who needs what in final group games? 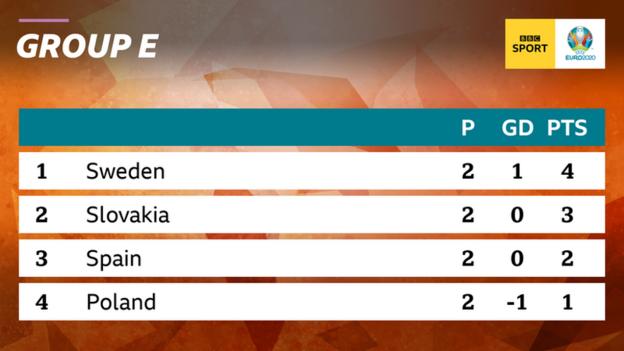 Nothing has been decided in Group E yet - but Sweden are likely to make it through to the last 16 as, at worst, one of the best third-placed teams

It is all to play in the final round of group fixtures.

Spain will go progress if they beat Slovakia. They will finish third if they draw unless Poland win.

Poland will go through as runners up if they win and the other game does not end in a draw.

Sweden just need to avoid defeat against Poland to go through. If they lose and the other game ends level then Sweden, Slovakia and Poland will be split for first to third place on results between the three teams.

Slovakia will progress with a win against Spain, or if they draw and Sweden avoid defeat.

The Proud Lilywhites: Tottenham's LGBTQ+ supporters' group on inclusivity in footballRadio 1's festival anthems Make your own festival with this mega playlist