The Wigan athlete, who turned 19 on Wednesday, led for much of the race and held off Pole Joanna Jozwik to win in two minutes 3.88 seconds.

"I didn't think about the pressure because I'm only 19," she said.

"I still have things to learn. I kept the relaxed state that I was in during the semis."

"They trust my instinct and have let me grow into my own athlete," Hodgkinson told BBC Sport. "I've got Jenny's experience to tap into when I need it."

Jamie Webb won bronze in the men's race. The 2019 silver medallist finished in one minute 46.95 seconds, behind Poles Patryk Dobek and Mateusz Borkowski. 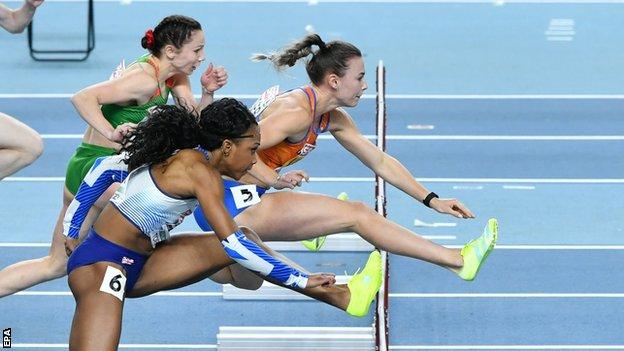 Sisters Cindy Sember and Tiffany Porter added to Britain's medal haul with silver and bronze in the 60m hurdles.

Dutchwoman Nadine Visser won in 7.77 seconds to retain her title, with Sember crossing the line in 7.89secs and Porter coming home in 7.92.

Visser was the outstanding favourite, but it was wide open as to who would take the other two places.

Sember ran cleanly and was never a stride away from the former heptathlete while sister Porter dipped at the right time to edge out Finn Nooralotta Neziri.

It has a been an uncertain journey to this stage for both Britons. Sember, 26, is seemingly back at her best having recovered from a career-threatening ruptured Achilles while Porter, 33, has won her first medal since giving birth to daughter Chidera in 2019.

The elder sister won silver in this event a decade ago and told BBC Sport that it had been a "huge journey" for her since.

"I'm pleased and grateful to be back," added Porter, who wore a mask while competing. "Hopefully, the family are proud."

Sember said: "I'm so happy to be here and alongside my sister. It's amazing to be medalling, it gives me a lot of confidence."

Andrew Pozzi was edged out by Frenchman Wilhem Belocian in the men's final.

"I was doing well at the start, but lost couple of steps in the middle," Pozzi told BBC Sport. "The better man won today. I'm a bit disappointed.

"I'm definitely in the best shape of my life. I'm really happy with where I'm at."

Jodie Williams added silver to the bronze she won in the 400m as Great Britain's quartet, which also included Jessie Knight, Ama Pipi and Zoey Clark, finished behind the Netherlands in the 4x400m relay.

Great Britain were understood to be set a target of six to 10 medals at these championships, but they finished with 12, equalling their record tally from two years ago in Glasgow.

"You can only beat who's there and there's lots to be happy with," Cram told BBC Sport, with some senior athletes including Britons Dina Asher-Smith and Laura Muir choosing not to compete in Poland.

The BBC commentator also praised Hodgkinson for her performance in the 800m final.

"She can run from the front or she can sit off," added Cram. "Today she showed real maturity and showed how strong she could be when she needed to turn it on."