Medan, Indonesia – A United States judge cleared the way for 11 Indonesian villagers to sue ExxonMobil for alleged human rights abuses after finding the majority of the gas and oil giant’s arguments to be “entirely meritless”.

In a searing 85-page opinion, US District Court Judge Royce Lamberth concluded that both witness testimony and ExxonMobil’s internal documents would potentially allow a reasonable jury to find that security personnel hired by the firm had abused villagers in Aceh province during the late 1990s and early 2000s.

Lamberth said the US multinational’s arguments about Indonesian law and other evidence in the case were repeatedly found to be “wrong” or “simply wrong”.

The reasoning, which was previously under seal, was publicly released on Tuesday after Lamberth last month ruled that the villagers’ lawsuit could go to trial after languishing in the US courts system since 2001.

The villagers allege that they or their loved ones were assaulted, tortured, abused and, in some cases, killed, by Indonesian soldiers who were contracted to ExxonMobil to provide security at the Arun gas field during fighting between separatist fighters and the military.

“We are gratified that the court was moved by the evidence we presented from more than a dozen eyewitnesses and agreed that this important human rights case against ExxonMobil should move forward to trial,” Agnieszka Fryszman, lawyer for the plaintiffs and chair of Cohen Milstein’s Human Rights Practice, said in a statement.

“This case has been up and down to the Supreme Court and tied up in pretrial litigation for over 20 years. This is a big turning point for our clients who have stuck it out for so long in the hopes of obtaining justice. We look forward to presenting our evidence to a jury.”

Court documents allege that 5,500 troops were deployed to Aceh province by February 2001, of which 1,000 were detailed to ExxonMobil Oil Indonesia – a company born of a merger between Mobil Oil and Exxon in 1999. 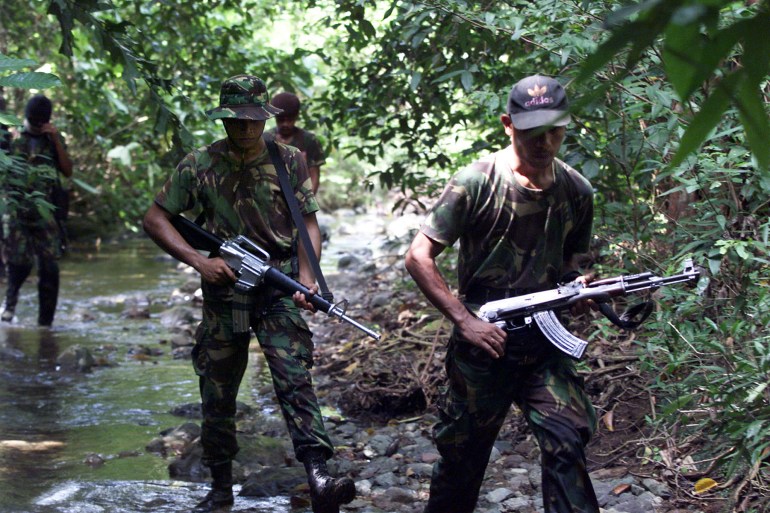 In the latest court filings, ExxonMobil’s lawyers said the plaintiffs had, among other things, failed to show that their alleged attackers were indeed soldiers contracted to the company or that the soldiers who allegedly committed wrongdoing did so in the course of protecting Arun field facilities.

Many of these arguments were roundly rejected by Lamberth, who said that they were “based on a false premise”, “wrong”, “false” and did not “hold water”.

Nasier Husen, a documentary filmmaker from Lhokseumawe in Aceh, who has spent decades interviewing alleged victims of abuse by soldiers working for ExxonMobil, said the company’s claims were clutching at straws.

“The people around Arun field and other ExxonMobil clusters knew which soldiers worked in the area and which didn’t,” Husen told Al Jazeera.

“Even if they did not know their names, they knew them by sight, and many of the soldiers involved in these atrocities were coming out of ExxonMobil property or took victims on to ExxonMobil property when they were abused. But ExxonMobil is allowed to defend itself legally however it wants.”

Husen said ExxonMobil’s lawyers had failed to take into account the cultural and historical context of the situation, which is now a matter of public record. Since the end of the civil war in 2005, the government-backed Truth and Reconciliation Commission (KKR) and the Commission for Disappeared and Victims of Violence (KontraS) have extensively documented abuses committed by the Indonesian military both around Arun field and across Aceh.

“I lived in a village outside the main town of Lhokseumawe during the conflict, and every time I went to work I would ask myself in my heart, ‘Is this the day I will die? Will I die before I get home or will I be kidnapped? Will I be tortured and then die?'” Husen said.

“It was the same with my wife. Sometimes I just imagined her as a corpse. It was only when she came home that I believed she was alive.”

In April, ExxonMobil was slapped with a rare penalty after Lamberth ruled that the oil giant pay $288,900.78 in legal fees and expenses to the plaintiff’s counsel following a botched deposition.

The judge appeared similarly exasperated with the arguments contained in ExxonMobil’s motion to dismiss the case, stating in his latest ruling that the court would “not permit defendants to weaponise foregone opportunities to invoke the appropriate procedure at the appropriate time.”

For its part, ExxonMobil has always denied any wrongdoing.

“We have fought these baseless claims for many years. The plaintiff’s claims are without merit,” ExxonMobil spokesman Todd Spitler said in a statement.

“While conducting its business in Indonesia, ExxonMobil has worked for generations to improve the quality of life in Aceh through employment of local workers, provision of health services and extensive community investment. The company strongly condemns human rights violations in any form.”