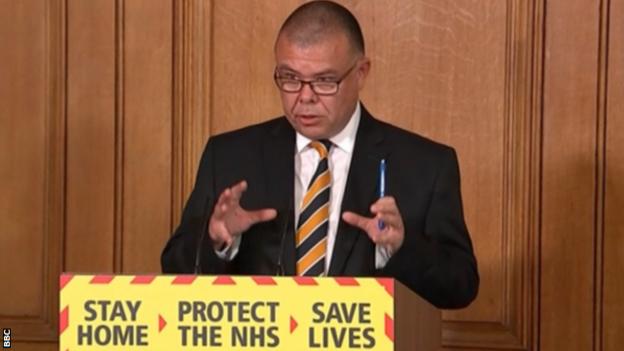 "I'm very proud to be a Boston United fan. If I can help put the Pilgrims on the map in any way, I'm always happy to do so. It means a lot to me," says Prof Jonathan Van-Tam.

As England's deputy chief medical officer, the professor has become a familiar face to millions on television during his appearances at the Downing Street coronavirus briefings.

Away from his busy work schedule, he likes to unwind by watching his beloved Boston United play in the National League North - the sixth tier of English football.

He has sported an amber-and-black club tie at the Downing Street podium - as well as namedropping his favourite team live on national TV.

"I'm a devout Boston United season-ticket holder and I'm desperate for football to come back," he said at a briefing in May 2020 after a government announcement that competitive sport could be played behind closed doors.

As the Pilgrims prepare for Saturday's FA Cup second qualifying-round tie with Corby Town, the professor talks to BBC Sport about his 50-year love affair with his hometown club, selfies with fans, and the joy at being asked to vaccinate members of his favourite team.

"It was just a brilliant moment vaccinating the players," he adds. "The only thing is I had my scrubs on and I couldn't wear my Boston United shirt." 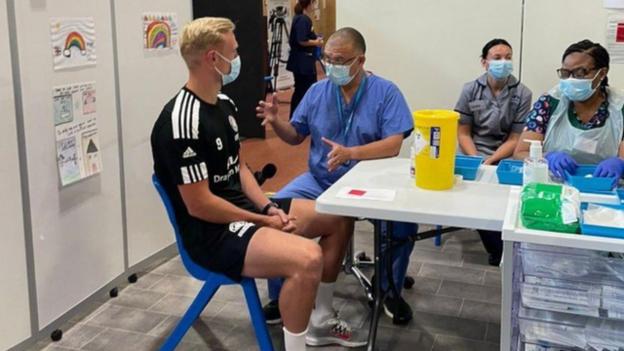 Biking it to games

Prof Van-Tam, 57, was seven when his grandad took him to his first match. The pair would cycle three and a half miles each way to York Street to watch the Lincolnshire side in the Northern Premier League against the likes of Wigan Athletic, Macclesfield Town and Morecambe.

"You didn't lock your bike in those days," he says. "You slung it behind one of the stands and went straight into the ground."

He was immediately hooked.

The former Boston Grammar School pupil was nine when he was part of a club-record 11,000 crowd at York Street for Derby County's visit for an FA Cup third-round replay in 1974.

The Rams had been champions of England just 18 months previously and Boston held them to a 0-0 draw at the Baseball Ground.

Four days later, Derby would avenge a 6-1 defeat against Boston in 1955 - the biggest a non-league club has inflicted on league opposition in the FA Cup - by winning by that same margin.

"The ground was so packed that we kids had to sit on the grass near the touchline," remembers the professor. "It was an afternoon kick-off and all the schools got closed. I've got the programme in a frame at home."

He missed the FA Trophy final defeat by Wealdstone in 1985, the club's only appearance at Wembley in their 88-year history, because of working long hours as a junior doctor, but was at Hayes in 2002 to see Boston promoted to the Football League for the first time.

Prof Van-Tam has suffered the low of seeing the club he loves come close to financial ruin and, in 2004, witnessed England icon Paul Gascoigne pull on a Boston shirt.

"Even then, at the end of his playing career, Gazza was producing little flickers of genius," he adds.

'A piece of York Street in my house'

Having attended hundreds of games at York Street, Prof Van-Tam was determined to secure a piece of history when Boston left their old ground in 2020 for the sparkling new Jakemans Community Stadium, which has been built to Football League standard.

"I've had a small extension built on the family home which serves as our sports bar," he adds. "It has a little bar and a 65-inch telly specifically for watching sport. It's the room where all my signed Boston United shirts and match balls are.

"What I really wanted was a turnstile from York Street to put in the doorway so you clicked through it to get to the sport.

"But they weren't for sale and some members of the family were having absolutely none of it in any case.

"But I did manage to get a Sports Bar sign from the outside the ground in a charity auction. That is now inside my sports bar above the telly. It's a piece of York Street in my house."

Prof Van-Tam has also secured a board listing club sponsors which managers would stand in front of for post-match interviews.

He adds: "When fans could not go to games last season, I followed Boston on the live stream. It wasn't quite the same but it was better than nothing." 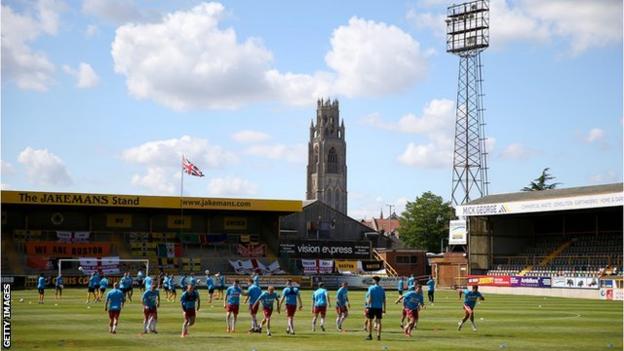 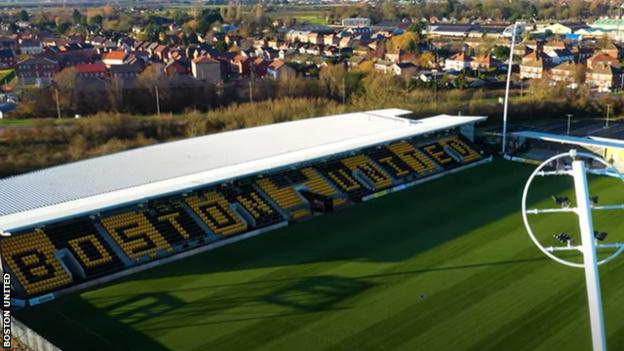 The Jakemans Community Stadium staged its first match in front of fans on 17 July 2021 when more than 1,000 supporters watched a pre-season friendly against Lincoln City

'The referee bought me a drink'

Prof Van-Tam was one of the 723 who witnessed a 2-1 win at Bradford (Park Avenue) AFC on 30 August. He says he is recognised because of his frequent appearances on TV.

"I get asked for the odd selfie. It's not too intrusive and they know I'm not there for anything other than the fact that I'm a Boston United fan and I really don't want to talk work."

On 9 July, the Pilgrims played a friendly at Matlock Town which provided the professor with an opportunity to put on his club shirt, have a pint with fellow fans for the first time in several months, and watch the team.

Before kick-off, Prof Van-Tam was approached by the referee.

"He recognised me and came running over to say 'thanks for the big effort on the Covid stuff - I've got to buy you a drink'."

Prof Van-Tam adds: "Non-league football is earthy. You have chats with people you don't know.

"They don't know a thing about you - well, they probably know a bit more about me these days - and you don't know much about them, but you kind of bond with them because at games you are part of the same extended family with the same passion. That's what it's about."

The professor, who is "determined" to get a tattoo of the Boston United crest, was thrilled to personally vaccinate Pilgrims strikers Jordan Burrow and Jordan Preston.

"I said to them 'I think I'm more nervous than you are'. When you have sensible young footballers who are prepared to be seen doing the right thing, it does set an example to others." 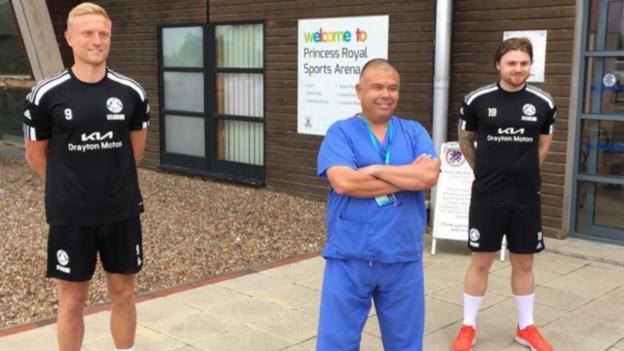 So, would he contemplate a position on the Boston United board if approached?

"I would consider it for about 0.5 seconds before I said yes. One would have to have a proper discussion about what the role would be.

"As much as I enjoy wearing a Boston United tie occasionally at the Downing Street podium, I don't know if I really want to wear a blazer and tie at games. I prefer the black-and-amber shirt."